The 2020 Portland Protest Shooting refers to a fatal shooting during the demonstrations that occurred in Portland, Oregon in late August 2020. As part of Portland’s ongoing protests since the death of George Floyd, a caravan of supporters of President Trump traveled to the city and clashed with counterprotesters, resulting in one man being shot and killed during the unrest. Several other incidents between the two groups took place prior to the shooting, including thrown objects, pepper spray, burning flags and paintball guns. Numerous arrests were also made over the course of the night.

On August 29th, 2020, a caravan of pro-Trump supporters gathered at a shopping mall near Portland and proceeded to travel into the city’s downtown area. That same day, New York Times correspondent Mike Baker posted numerous videos of the event on Twitter, including the initial gathering of the Trump supporters (seen below) that received over 2.2 million views, 28,000 likes and 12,000 retweets in roughly 42 hours.

I’m out in the Portland suburbs, where hundreds of Trump supporters are gathering for an event. They say they will be driving into Portland later tonight. pic.twitter.com/NUHy5e4TnP

Over the course of the day, the caravan and counterprotesters clashed several times as people shot paintball guns and pepper spray from vehicles, while protesters threw objects at them or burnt flags. Mike Baker shared another clip of this encounter between the two groups that day (shown below), receiving over 5.6 million views, 21,000 likes and 11,000 retweets in roughly 37 hours.

Clashes. Trump people unload paintballs and pepper spray. They shot me too. pic.twitter.com/PwU5pZMLnV

Late that night, an altercation occurred between two small groups where a man was shot in the chest. Medical responders at the scene determined that the victim was dead shortly after. According to the New York Times, who retraced the day’s events in an article, the man who was shot was a member of “Patriot Prayer, a far-right group based in the Portland area.” The Washington Post said in an article about the incident that the shooter was “congregating with Black Lives Matter counterprotesters before opening fire.”

Several videos of the shooting went viral on social media, which also trended on Twitter, depicting the event and the aftermath. On August 30th, Twitter user stillgray tweeted a video showing the shooting. The clip (seen below) received over 475,000 views, 830 likes and 480 retweets in roughly 36 hours.

This was the fatal shooting that just took place in Portland, Oregon. It does not appear to be related to the ongoing Antifa protest. pic.twitter.com/79OrmNuXAx

In the following days, online discussions and debates flooded numerous social media platforms, ranging from supporters to detractors of either side involved. Several high profile politicians also took to their social media to comment on the shooting. On August 30th, Donald Trump tweeted a slew of comments on the event (shown below, left), receiving over 120,000 likes and 31,000 retweets in roughly 22 hours. Joe Biden also shared his response on Twitter that day (shown below, right), receiving over 118,000 likes and 29,000 likes in roughly 22 hours.

On August 30th, Twitter user AmyKremer tweeted about the victim and said, “He was a good American that loved his country and Backed the Blue. He was murdered in Portland by ANTIFA,” receiving over 63,000 likes in roughly 20 hours (seen below). 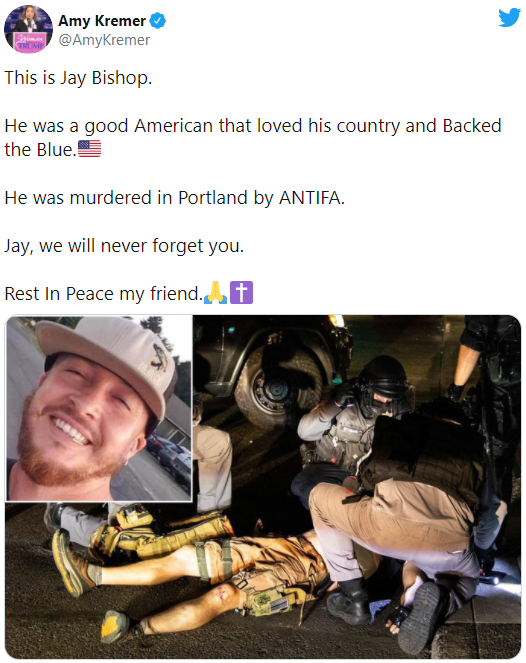 That same day, Twitter user MrAndyNgo tweeted a clip showing the counterprotesters reacting to the shooting (shown below), receiving over 882,000 views and 15,000 likes in roughly 36 hours.

“He was a f–ing Nazi! Our community held its own.”

Antifa & BLM in Portland celebrate the homicide of a purported Trump supporter who was affiliated with Patriot Prayer, a Portland-area conservative group. pic.twitter.com/xjIWk0KHN2

What can I do for...extra credit.
Uber To Pay $4.4 Million Settlement To Victims Of Sexual Harassment
Chris D'Elia Releases E-mail Exchanges With Accusers Showing He Asked Their Ages And Turned Them Dow...
She warned her...