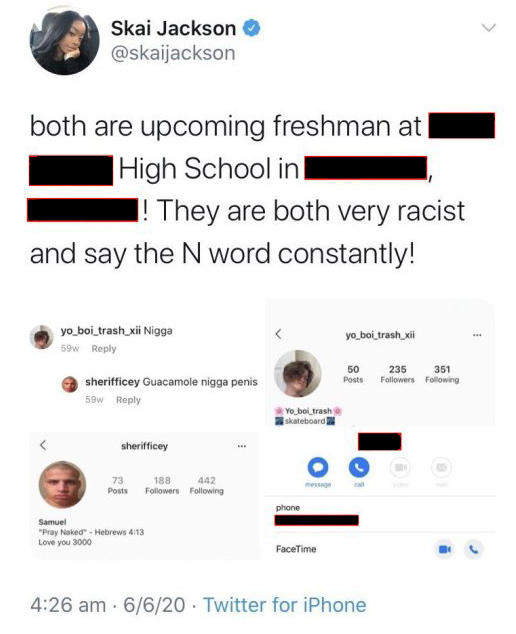 Skai Jackson Doxxing Minors refers to the controversy surrounding American actress Skai Jackson doxxing and posting personally identifiable information of various adolescents to her Twitter feed and encouraging her followers to send her examples of “racism” online in an effort to expose them.

In late May and early June 2020, Jackson made several posts to her social media accounts, primarily Twitter, requesting her followers to share examples of racism and revealed their personal information, including phone numbers, addresses, emails and information about their schools. In one instance, the name, number and address of a 13-year-old boy was posted in screenshots to her Twitter feed (seen below), which has since been removed for violating the platform’s rules.

After followers went after the wrong person online, Jackson later apologized and said, “don’t go after that account. I posted the wrong one.” 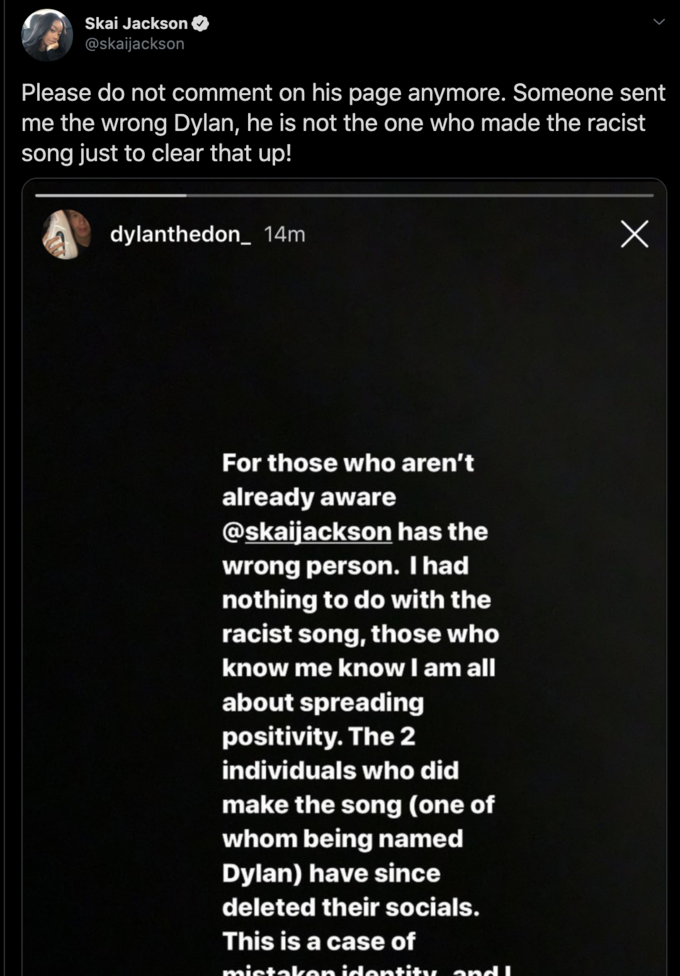 On June 1st, 2020, and the following days, Jackson requested her Twitter followers “If you know a racist, and would like to expose them, dm me on Instagram and give me all videos/ screenshots, Instagram and what school they go to,” and posted numerous examples on Twitter.

Over the course of early June 2020, users online replied to the series of tweets with a mixture of support and criticism. One such example was tweeted by Twitter user elijahdaniel on June 5th, 2020, who said, “omg …. what @skaijackson is doing on twitter right now…. is what we call modern art,” receiving over 51,000 likes and 5,900 retweets. On June 15th, 2020, Twitter user zaptiee criticized the actions of Jackson and her followers and stated, “This fucking psychopath spends her time doxing highschoolers for saying ‘guacamole nigga penis’ i cannot make this shit up,” receiving over 4,300 likes and 700 retweets (seen below).

Several YouTubers began discussing the controversy in mid-June 2020, including Upper Echelon Gamers, diesel patches and SomeOrdinaryGamers, who uploaded a video on June 17th, 2020, titled “Skai Jackson Is Completely Irresponsible…” The video (shown below) received over 350,000 views, 34,000 likes and 4,600 comments.
In June 2020, many media outlets also began reporting on the story, with a mixture of praise and criticism. On June 10th, 2020, InStyle published an article titled, “Skai Jackson Is Using Her Platform to Expose Racism Online,” which applauded her behavior. On June 17th, 2020, the site SausageRoll published an article criticizing her actions under the title “Skai Jackson, 18, uses Twitter to ruin minors’ lives for edgy memes.”

Reddit also began discussing the controversy on the platform in June 2020, including a post from Redditor 1jmlucas to the r/OopsDidntMeanTo sub. The post (seen below), was captioned under the title “Skai Jackson recruiting her fans to dox ‘racist’ minors info publicly without even fact-checking info,” receiving nearly 300 upvotes and 60 comments. 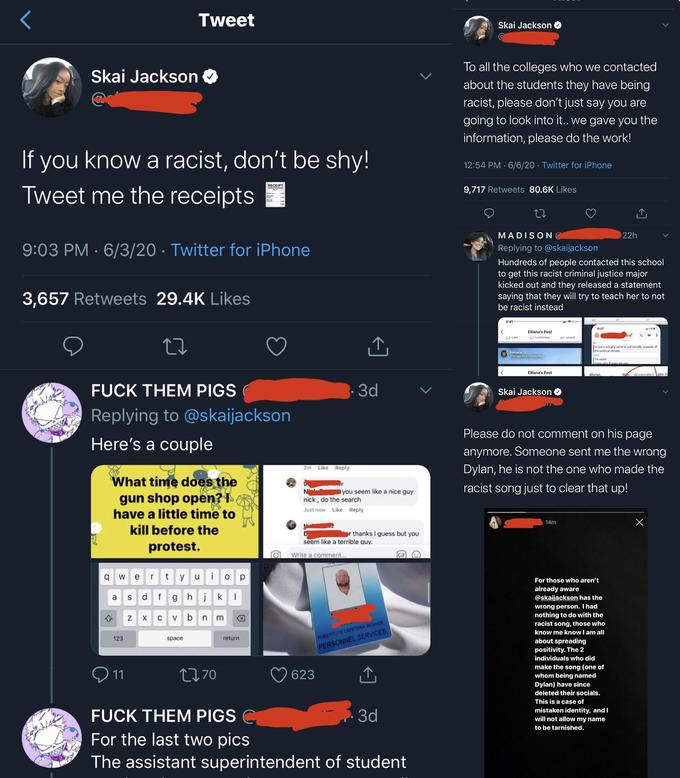 On June 17th, 2020, after several online users began noticing the comment “guacamole nigga penis” being spammed on Jackson’s Twitter, Redditor bestchampion1 made a post to the r/OutOfTheLoop subreddit and asked, “What’s the deal with everyone comment “guacamole n**** penis” on Skai Jackson’s Twitter?” The post was upvoted over 7,800 times and commented on 831 times. The top reply from Redditor E_Koli3 said:

Answer: (kind of) “Guacamole n**** penis” came from one of those stupid Facebook rapper names where this one said “Your rapper name is the color of your pants and the last thing you ate. Mine is… Blue waffle?” and someone replied saying “guacamole n**** penis” and Skai Jackson didn’t like it because it had the n-word so she released the contact info of people who said it and now people are spamming her twitter with it.