The 2020 Kyle Rittenhouse Kenosha, Wisconsin Shootings refers to the fatal shooting of two protesters and wounding of a third by Kyle Rittenhouse during the riots and demonstrations that occurred in Kenosha, Wisconsin in late August 2020. The protests were originally sparked by the shooting of Jacob Blake, who was shot seven times in the back by police on August 23rd, resulting in widespread looting, property damage and conflicts between protesters and police.

On the night of August 25th, 2020, clashes broke out between armed civilians and protesters in Kenosha, Wisconsin, resulting in two deaths and a third person seriously injured after a shooting occurred involving 17-year-old Kyle Rittenhouse from Antioch, Illinois. According to The NYPost, the shooting was sparked by a conflict between rioters who were damaging cars at a dealership and armed citizens who attempted to stop them.

The first shooting occurred while Rittenhouse was being pursued by a group through a parking lot. Footage filmed during the event shows Rittenhouse fleeing when 36-year-old Joseph Rosenbaum appears to throw an unidentified object at him before confronting Rittenhouse, who then shot four times, hitting Rosenbaum once in the head, killing him. On August 27th, Christiaan Triebert, part of the New York Times visual investigations team, shared a breakdown of the first shooting on Twitter (seen below), receiving over 600,000 views and 2,100 likes in roughly 40 hours.

The initial shot and Rittenhouse’s four subsequent discharges of his AR-15-style weapon are followed by three more shots in the parking lot — we don’t know who fired them. Rittenhouse seems to make a phone call and then flees the scene. pic.twitter.com/ddRjsgiMN7

The second and third shootings occurred shortly after as Rittenhouse ran down a street while being chased by a large group of people. At one point, Rittenhouse trips and falls as several individuals begin assaulting him. During this confrontation, Rittenhouse fires four more shots, hitting 26-year-old Anthony Huber in the torso, who later died, and 26-year-old Gaige Grosskreutz in his right upper arm.

On August 26th, Twitter user ElijahSchaffer tweeted one of his videos showing the shooter fleeing the scene of the first shooting while being chased. The clip (shown below) received over 1.9 million views, 6,200 likes and 2,900 retweets in roughly 10 hours.

BREAKING: as the shooter fled the scene to surrender to the police

BLM rioters attacked him, he then fired back over what appears to be a scuffle to get control of his weapon

Details are still unclear. I was up front on the initial shooting only
pic.twitter.com/tB7O2JKUUn

After the last two shootings, Rittenhouse flees towards a group of police vehicles with his hands raised in the air as people shout in the background. Rittenhouse later returned to his home in Illinois before he was arrested on charges of first-degree intentional homicide on August 26th.

Several videos of the shooting went viral on social media, which also trended on Twitter, depicting the event and the aftermath. Twitter user Julio_Rosas11 shared a video of the man who was shot in the arm that same night (seen below), receiving over 790,000 views, 4,500 likes and 2,500 retweets.

Here’s video of the man’s wounds, I recorded him being shot in Kenosha. His right arm is badly damaged. Credit: @ louriealex (instagram) pic.twitter.com/iE8vUG27mb

The events of the shooting were covered by media outlets all across the world, including the New York Times, who pieced together footage from the confrontation and retraced the steps of Rittenhouse over the course of the night.

On August 26th, several videos of Rittenhouse being interviewed before the event were also shared online. One such clip was taken by TheRundownLive and later shared by Twitter user CRYPTOPUNKK (shown below), receiving over 127,000 views in nine hours.

On August 26th, after the shooter was identified as Kyle Rittenhouse, he was arrested in Illinois on charges of first-degree intentional homicide, according to Lake County, Illinois Clerk of Courts public records. In the complaint, Rittenhouse was also labeled as a “fugitive from justice” for fleeing Wisconsin with “intent to avoid prosecution.” Under state law, he will also be charged as an adult.

On August 28th, Rittenhouse appeared at an extradition hearing with his assigned public defender, according to The Daily Beast. In the State of Wisconsin vs. Kyle H. Rittenhouse indictment, six charges were brought against Rittenhouse for first-degree intentional homicide, first-degree reckless homicide and attempted homicide. These felony charges also include the modifier “use of a dangerous weapon,” which adds “no more than five years of imprisonment for each of the charges if found guilty.” The misdemeanor charge also includes possession of a dangerous weapon as a minor.

Between August 25th, the night of the shooting, and August 28th, the day of the hearing, online discussions, debates and other discourse flooded nearly every major platform. Ranging from supporters to detractors, social media users had a wide range of opinions on the event and Rittenhouse himself.

On August 28th, Twitter user stone_toss tweeted “Give that boy a medal and a pension,” receiving over 8,300 likes in roughly eight hours (shown below).

On the other side, Twitter user WajahatAli tweeted that same day “Kyle Rittenhouse is not a victim. He’s a murderer,” receiving over 2,500 likes in roughly three hours (shown below).

On August 27th, news of the charges brought against Rittenhouse also became a trending topic on Twitter. On August 26th, Redditor BunnyLovr posted a video to the /r/ActualPublicFreakouts subreddit that stitched together the entire sequence of events in the Kenosha shooting, receiving over 4,000 upvotes, 4,700 comments and several Reddit awards.

On August 27th, Instagram user denny_ow posted artwork, titled “THIS IS AMERICA,” to their feed (seen below), receiving over 115,000 likes in roughly 23 hours. 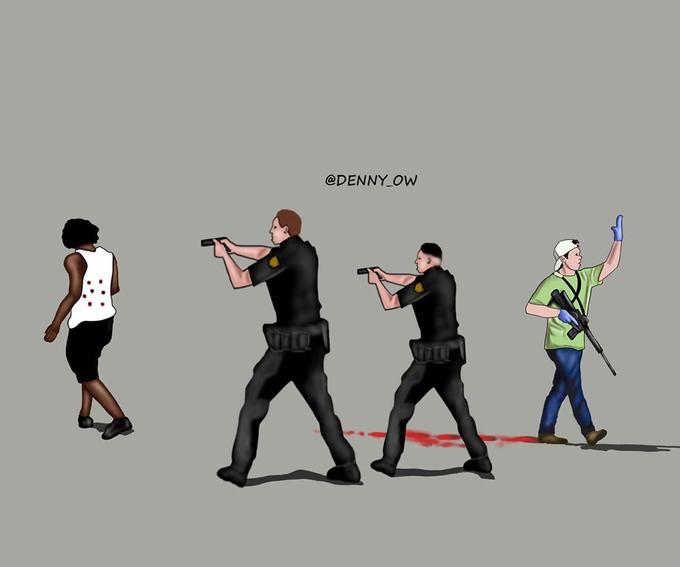 Memes referencing Rittenhouse and the victims also appeared on a few platforms, such as 4chan’s /pol/ board, where several examples were posted by anonymous users in a thread titled “Kyle Rittenhouse meme thread” (shown below). 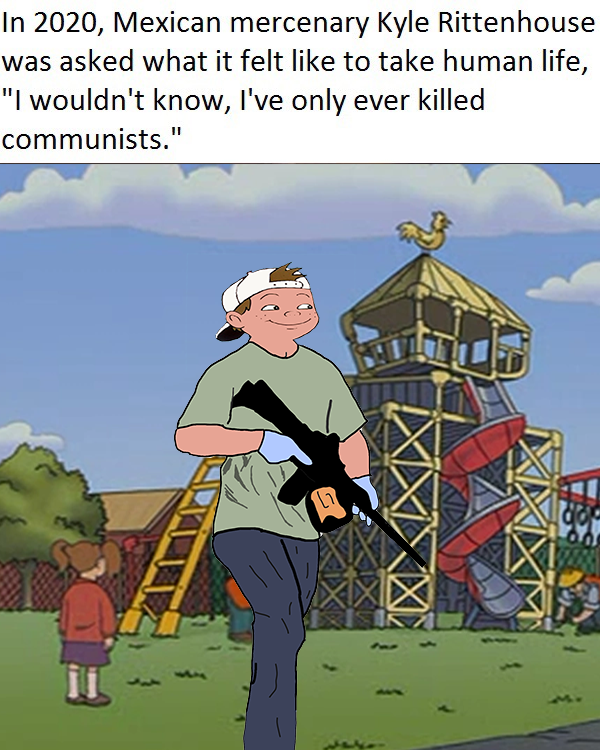 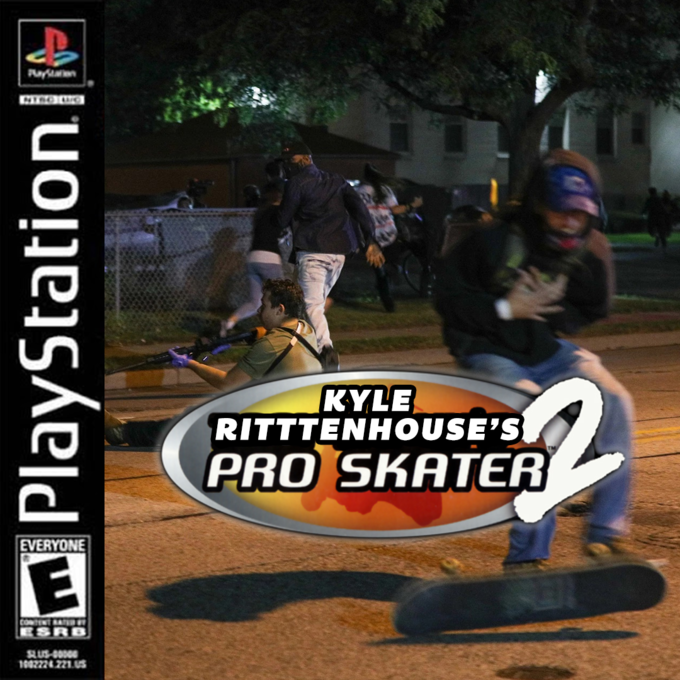 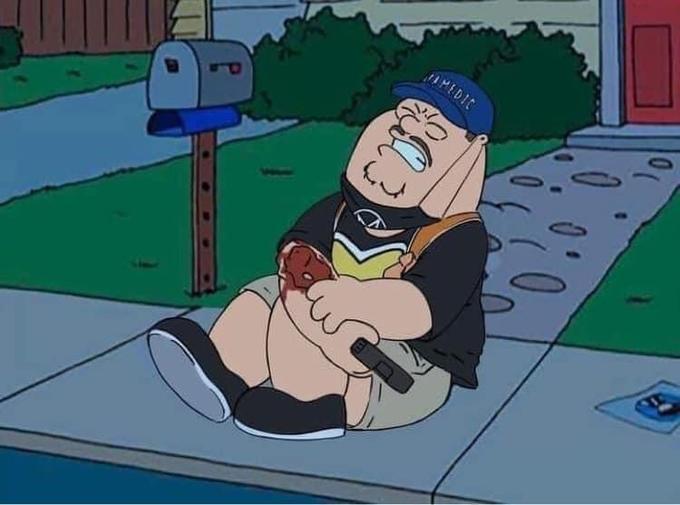 Calls To "Defund The Police" Grow Amid Protests, Outrage
Nintendo Announces "Hyrule Warriors: Age Of Calamity," A Prequel To "Breath Of The Wild"
It does make sense
The Flex Is Free