TimTheTatMan is the online handle of Timothy John Betar, an American video game streamer popular on Twitch, where he is known for playing Call of Duty: Warzone, Fortnite, World of Warcraft, Overwatch and Fall Guys Ultimate Knockout. Betar began streaming on Twitch in late 2012 and saw a sharp spike in renown during his chase for a win in Fall Guys around August 2020 when he reached the trending topics section of Twitter.

On October 8th, 2012, Betar launched his Twitch channel under the handle “TimTheTatMan” and began streaming titles such as Counter-Strike Global Offensive and World of Warcraft. According to Twitchmetrics, Betar’s channel has amassed a following of over 5.2 million users in roughly eight years, with over 7.1 million viewer hours. Since 2014, Betar has been a certified Twitch partner and full-time creator on the platform.

Betar is also an athlete on the Monster Energy eSports team and is sponsored by Audio-Technica.

In December 2012, Betar created his Twitter account, garnering over 1.9 million followers in almost nine years. On October 4th, 2013, the /r/TimTheTatMan subreddit was created as the “(Un)Official home of the TatMan Army” and accumulated nearly 4,000 members in roughly seven years. Around mid-July 2014, Betar created his Instagram page, which garnered over 3.3 million followers in just over six years.

Fall Guys Chase for the Crown 2020

In mid-August 2020, Betar began streaming himself playing the game Fall Guys, as he attempted to win a match in the battle royale title and receive a crown. During this timeframe, various clips of Betar being eliminated in the game began circulating social media, depicting his frustrated reactions as he continued to fall short of a win. On August 18th, 2020, the official Twitch Twitter account tweeted a montage of his losses (seen below) alongside the caption, “We’re rooting for you,
@timthetatman.” The tweet received over 1.5 million views, 79,300 likes and 9,200 retweets in just 48 hours.

We’re rooting for you, timthetatman. pic.twitter.com/qVzMxO8FNS

HE DID IT / HE FINALLY DID IT

On August 19th, 2020, Betar won his first Fall Guys match while streaming on Twitch. Shortly after, Twitter user @KeviSkillz tweeted a video of the final moments of the match along with the message “HE DID IT” (shown below). Within one hour, the video accumulated more than 319,000 views and 9,900 likes.

HE DID IT timthetatman pic.twitter.com/s7d6RtFh9g

Shortly after his win, Betar tweeted an image of his Twitch channel’s stats during his win (shown below), which received over 118,000 likes and 3,600 retweets in 24 hours. 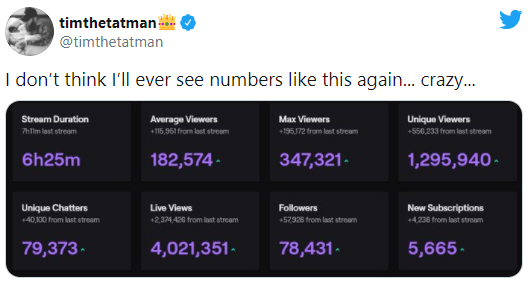 On August 20th, ESPN esports interviewed Betar in an article titled “Battle Royale with Arda Ocal: How TimTheTatMan got a Fall Guys win.”

My brain: What did you just do!
Twitter Dunks On Tweet Comparing Two Fictional 21st Century Characters Asking, "What Happened To Men...
Fuck yeah.
TikTokers Develop A You Format To Show Off How Creepy They Are