Fallout is a role-playing video game series originally created by Interplay Entertainment and Black Isle Studios and currently developed by Bethesda Softworks. The games take place in a retro-futuristic 22nd-23rd century United States where humanity is trying to survive in a world devastated by the effects of full nuclear war. Its story and artwork are heavily influenced by the post-World War II nuclear paranoia of the 1950s.

In each game, the player assumes the role of a survivor living in a post-apocalyptic United States. The player must also utilize several skills (Science, Repair, Energy Weapons, etc.) and attributes (SPECIAL) that can be improved to tailor the game to the character’s play style. The player is equipped with a “PIP-Boy” wrist-computer that can be used to access quests, inventory and player statistics. Battles in first two games are turn-based with the player using an point system to complete attacks and other actions during battle. The latter games in the series relies on 1st to 3rd person action rather than turn based action. Fallout and Fallout 2 feature 2D isometric graphics, while Fallout 3 and Fallout: New Vegas use a 3D graphics engine.

The original Fallout game was released on September 30, 1997 as the spiritual successor to the cult 1988 game Wasteland. On September 30th, 1998, the sequel Fallout 2 was released, which contained an improved game engine and the ability to control the moods of party members. In the coming years, the spin-off games Fallout: Tactics (2001) and Fallout: Brotherhood of Steel (2004) were released. Bethesda Softworks began developing Fallout 3 in 2004 to run on their Gamebryo engine, the same engine used in The Elder Scrolls 4: Oblivion. On October 28th, 2008, Fallout 3 was released, which takes place 36 years after the events of Fallout 2 in Washington, DC. On October 19th, 2010, the game Fallout New Vegas was released, which takes place in post-apocalyptic Nevada, California and Arizona.

On January 9th, 2013, the voice actor Erik Todd Dellums, known for voicing the character Three Dog in Fallout 3, posted a tweet hinting that his character may return in an upcoming sequel:

To all my #Fallout3 and #ThreeDog fans: There may be more of the Dog coming! Fingers crossed!

On January 10th, Redditor GNR_Informant submitted a post to the /r/gaming subreddit, claiming that an upcoming Fallout game will take place in Boston, Massachusetts and will have a more “cyberpunk” aesthetic. On the following day, GNR_Information confessed that his claims were fabricated. On July 12th, the gaming news blog IGN published an article claiming that Fallout 4 was “currently in development at Bethesda.”

On November 14th, 2013, Redditor ButcherDX suggested in an /r/Fallout post that Bethesda may have begun promoting the release of Fallout 4 with thesurvivor2299.com, a blank webpage embedded with an audio file signaling “11.12.2013” in morse code. On the same day, Redditor Jozoz submitted a post about the mysterious site to the /r/Games subreddit, adding that the page had been updated with a timer counting down to December 11th, 2013 (shown below). 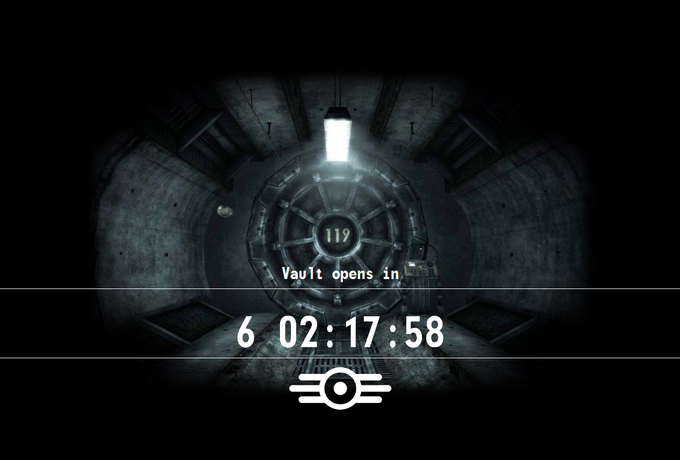 In the comments section, many Redditors expressed doubts towards the site’s relevance to Fallout 4, with Redditor salromano pointing out that all of Bethesda’s other domains were registered through a different service and another who suggested that it may be a promotional website for the VGX video game award show. Also on November 14th, NeoGAF Forums member scytheavatar posted a thread speculating that the domain was registered by someone in Poland. On November 15th, the video game news blog Rock Paper Shotgun posted an article about thesurvivor2299.com, noting that Bethesda had refused to comment about on its existence. On the same day, a Twitter account for the website was launched with the handle @12072299, or December 7th, 2299, adding even more mystery to the website.

On November 26th, the video game news blog Kotaku published an article speculating that the website may be a hoax. On December 5th, Bethesda’s marketing VP Pete Hines issued a statement via Twitter that the company would not be revealing any new products at the upcoming VGX awards.

No, folks. I am not going to VGX. Bethesda is not showing/talking about anything at VGX. Just some PR meetings in LA. Take deep breaths.

On the following day, thesurvivor2299.com was updated with a confession that the site was an elaborate hoax and thanked members of the /r/Fallout subreddit. Also on December 6th, Bethesda posted a tweet advising fans to “assume all rumors and speculation are false” unless posted on an “official channel.” 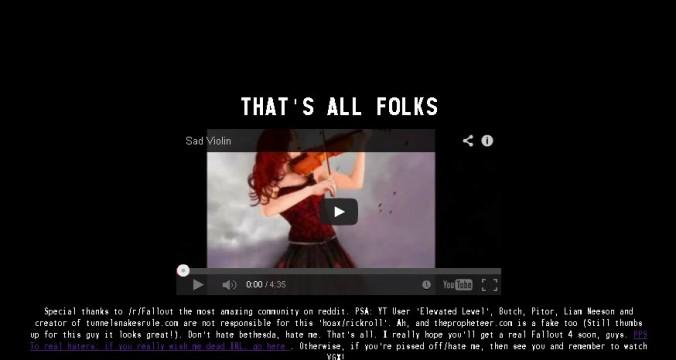 On December 7th, Redditor DCHoaxer submitted an “ask me anything” (AMA) post to the /r/Fallout subreddit, in which he claimed to have orchestrated the hoax. In the first four days, the post garnered more than 6,900 up votes and 2,900 comments.

On the June 2nd, 2015, Bethesda’s official Fallout website was updated with a mysterious countdown timer set to expire at 10 a.m. (EST) on June 3rd. This gave rise to speculation that a fallout game was on the horizon.

Once the timer expired, the aforementioned speculation turned out to be true with the web page switching to the long awaited trailer for Fallout 4 (shown below).

On November 9th, 2015, Polygon uploaded footage of the Fallout 4 robot character attempting to say various names, noting that over 1,000 names were recorded for the game (shown below).

The following day, Fallout 4 was released for Microsoft Windows, PlayStation 4 and Xbox Ones systems to critical acclaim. That day, several posts about the game hit the front page of Reddit, many of which contained screenshots of humorous character creations (shown below).

On May 30th, 2018, Bethesda released a teaser for an upcoming game in the Fallout universe called Fallout 76. The teaser gained over 1.7 million views in a matter of hours (shown below). More information is said to be coming at the upcoming E3 on June 10th.

It was initially unclear as to what sort of game Fallout 76 will be. According to Kotaku, sources have indicated that it will be an online survival multiplayer experience similar to games like DayZ and Rust. This was later confirmed. Online, Twitter users responded with enthusiasm to the announcement (examples shown below). 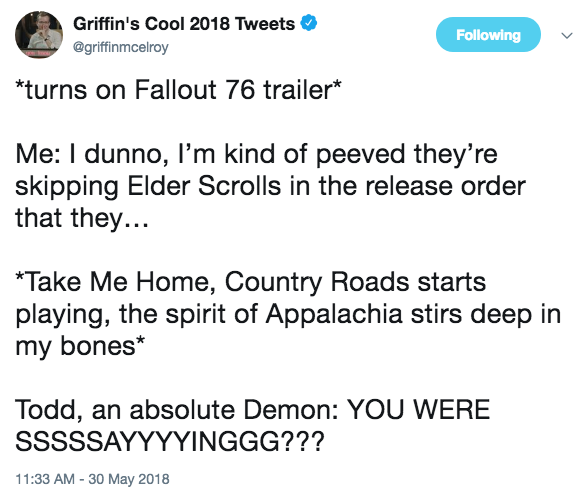 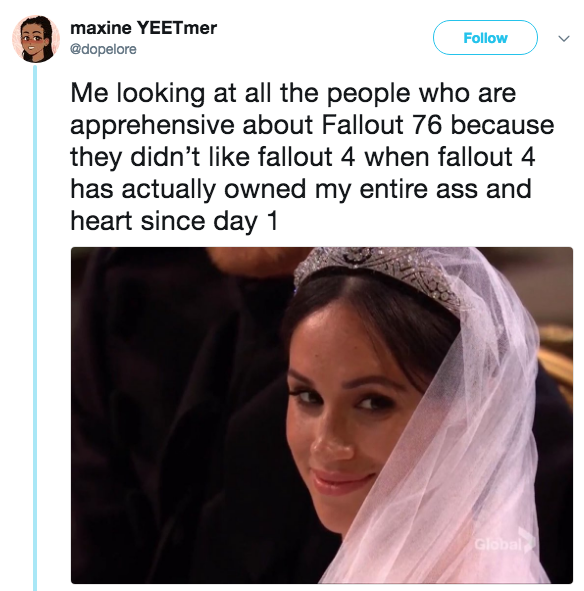 On July 2nd, 2020, Amazon Studios and Bethesda Softworks teased a TV adaptation of the game, developed by Westworld and Person of Interest production company Kilter Films. The teaser received over 6,700 retweets and comments, 12,100 likes and 313,800 views in five hours (shown below).

Fallout fans have a powerful presence online. A Wikia that documents various helpful information about the games exists with a large 18,782 pages written. There is a staggering amount of 131,559 results for ‘fallout’ when searched using DeviantArt’s search bar. There are approximately 5,000 fanfictions for Fallout on the website Fanfiction.net.

Vault Boy is an image macro series inspired by Fallout 3, which features a superimposed head of the Vault-Tec corporation mascot Vault-Tec, which was contracted by the United States government before the Great War to design and produce the vault system in the Fallout franchise. The captions either describe humorous actions that a typical Fallout 3 player may perform or jokes about the game itself. 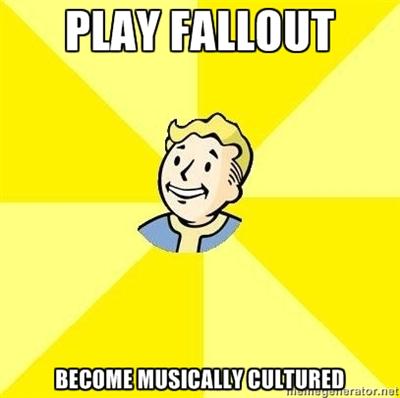 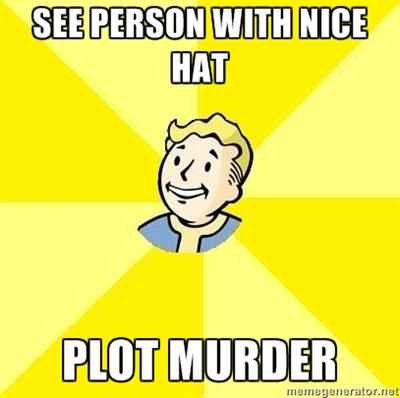 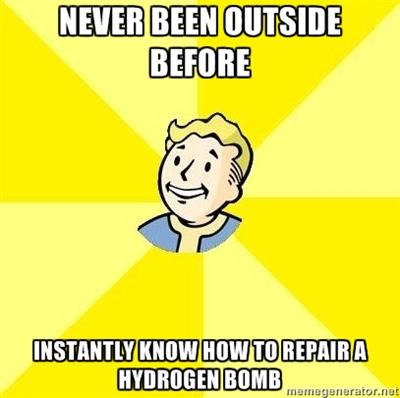 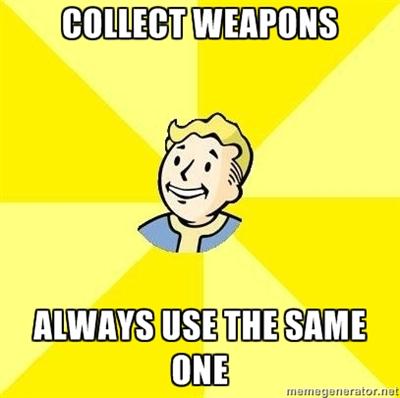 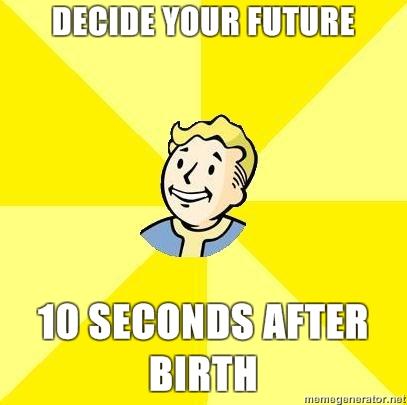 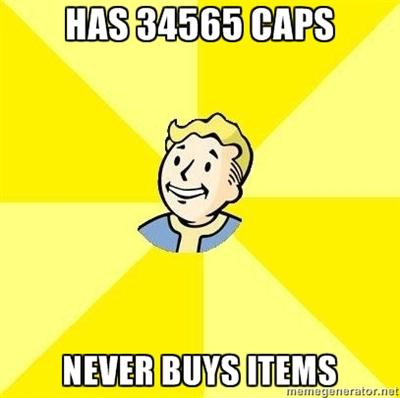 Tunnel Snakes Rule! is a catchphrase from the game Fallout 3, which is uttered by the leader of a gang of greasers in Vault 101.

“Speech check comments” are YouTube comments written in the style of the speech check system in Fallout 3 and Fallout: New Vegas, which is used to determine if a player has enough skill to complete a task. 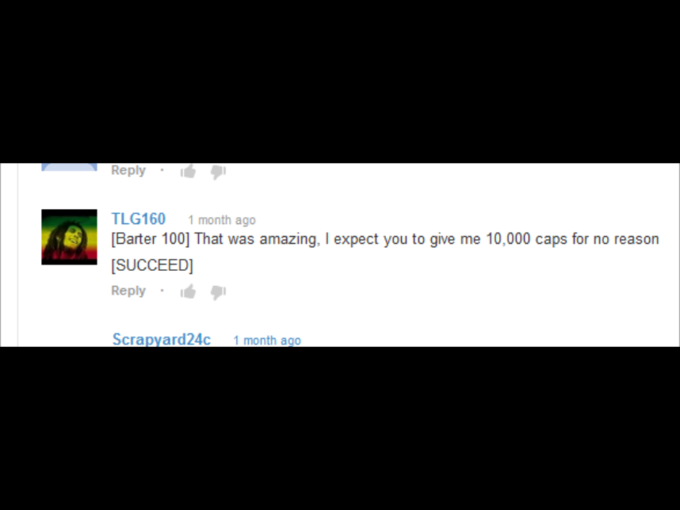 “War… War never changes” is the motto of the Fallout series. In the Intro of every major fallout game the narrator (Ron Perlman) discusses the events that led up to the current Fallout game and how these events happened. His first line states that even though civilisations means of warfare have changed as time passes, the ends always remain the same.

“Patrolling the Mojave Almost Makes You Wish For a Nuclear Winter” is a memorable quote from Fallout: New Vegas. It is a stock line frequently said throughout the game by foot soldiers of the New California Republic Troops, similar to other well-known video game quotes attributed to non-playable characters (NPCs) such as I Took an Arrow to the Knee in The Elder Scrolls: Skyrim.

Lets Go Pal is a saying uttered by the protagonist of Fallout 4 during the Fallout 4 reveal trailer. Due to this being the first confirmed line of dialogue from a player character in a fallout game and due to the rolling nature of coverage on Twitch with the reveal trailer being live-streamed repeatedly, this caused twitch users to flood the comments section with the phase during every repeat. This action in a similar way to “Tunnel Snakes Rule!” then spread to YouTube with most Fallout related videos being spammed with the “Lets Go Pal” phase.

Mr Matty’s Analysis refers to a recurring meme on Fallout 4 based videos with users commenting that the YouTube Channel MrMattyPlays will do an in depth analysis about the aforementioned videos. After the release of the Bethesda YouTube video “Fallout 4 Strength”, Users began to comment that Matty Schroeder (Creator of fallout speculation channel MrMattyPlays) will be releasing an in depth analysis of the video with the joke being that the analysis video will be 20 times the length of the original video due to Schroeder’s tendency to create videos which are triple the length of content he is analysing.

“It Just Works” is a memorable line said by Todd Howard, Fallout 4‘s director, during the game’s gameplay reveal at the Electronic Entertainment Expo. The quote, along with a photograph of Todd Howard, is often used by players to caption flawed segments or glitches encountered in Fallout 4.

“I’ll mark it on your map” refers to a recurring line of dialogue said by the character Preston Garvey during Fallout 4. Due to the character’s role with the Minutemen and the fact that he is the first human companion available in the game, his dialogue has been heard by most players of Fallout 4 causing this unintentionally humorous dialogue to spread.

Due to the lack of recorded dialogue for the character and his role as a radiant quest giver, players became frustrated with his limited repeating dialogue and wooden performance with lines such as: “News of a nearby settlement that is in need of help. Here, I’ll mark it on your map” and “At least it’s not raining”. This combined with the poor romance dialogue for Garvey has gave rise to numerous comments poking fun at the character.

друг is the nickname of a cryptid featured in a cursed image of a Deathclaw from the Fallout series. The creature is named after the Russian word for “friend,” pronounced “droog” or “drook.”