KissAnime was an anime-focused streaming website launched in 2012 that hosted links and embedded videos of illegally uploaded anime. Considered one of the largest anime streaming websites, KissAnime and its sister manga-focused website KissManga were shut down on August 14th, 2020, following changes to Japanese laws on online piracy.

On August 9th, 2011. KissManga.com domain was registered. The website hosted manga content, becoming one of the largest manga depositories over the following years.

On October 25th, 2012, a domain for sister website KissAnime.com was registered. The website hosted links and embedded videos of illegally uploaded anime, becoming one of the largest anime streaming websites.

On December 17th, 2016, a new domain KissAnime.ru was created, with the KissAnime moving its operations there. In addition to the main domain, multiple copycat websites registered in various countries were created by third parties, largely mirroring KissAnime’s content and design.

On June 5th, Kyodo News reported that the Japanese parliament enacted revisions to the Japanese anti-piracy laws, banning illicit downloading of manga, magazines and other materials. In addition to the sites hosting such content, the revised law also applied to the websites linking such content, with these restrictions set to come into effect on October 1st, 2020.

On August 14th, 2020, on KissAnike / KissManga’s official Discord server Kiss Community, KissAnime team reported that the website’s beta servers had been taken down, which could lead to the closing of the website. On August 15th at 1:20 EST, KissAnime team reported that the files were taken down by the copyright owners, with KissManga and KissAnime closing down forever. Both websites were made unavailable to users, displaying the message “All files are taken down by copyright owners. The site will be closed forever. Thank you for your supports.” 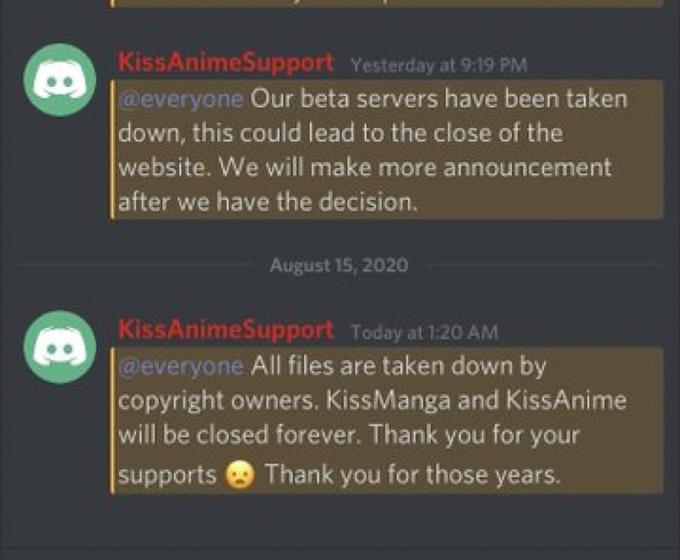 Before the shutdown, KissAnime featured several tabs of content on its main page, including “Home,” “Anime List” and “Report/Request,” as well as a search function. The home tab featured latest updates, announcements and additional tabs for “New & Hot” content, recent addition adn most popular series. 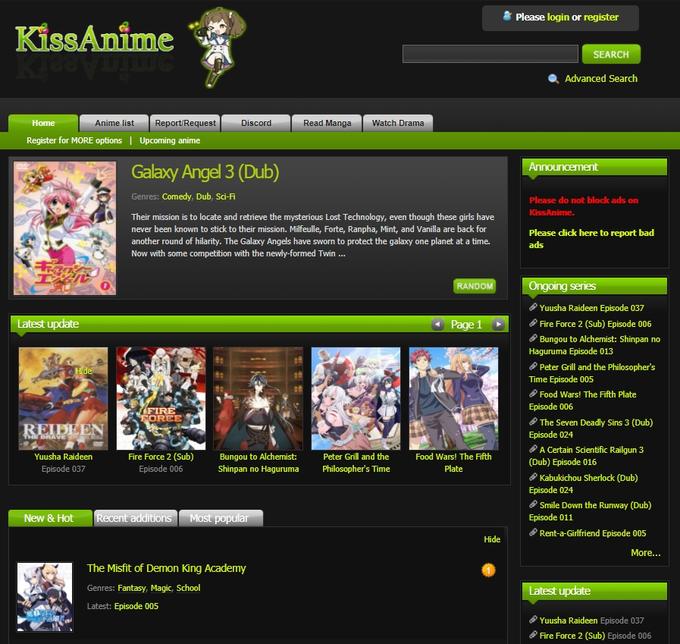 The announcement of the shutdown of KissAnime and KissManga sparked significant reaction online, with multiple users on Twitter, Reddit and other social networks expressing regret over the websites’ shutdown with posts and memes. On August 15th, Twitter user @Lost_Pause_ tweeted about the KissAnime’s shutdown, with the tweet gaining over 1,600 retweets and 15,000 likes (tweet shown below, top). A same-day tweet by @HeavenlyControl received over 2,000 retweets and 12,300 likes (shown below, bottom left).

In addition to posts about KissAnime, many posts expressed referenced anime streaming websites with licensed content such as Crunchyroll and Funimation, as well as contained links to other alternative pirate websites.

Crunchyroll and Funimation after hearing Kissanime is finally gone: pic.twitter.com/Rs2d2Fkkr1

As of August 1st, 2020, kissanime.ru ranked number 515 most popular website globally, while kissmanga.com ranked number 2035 most popular. For both sites, the United States users constituted the largest part of their userbase, with 18.5% and 23.9% of users, respectively.