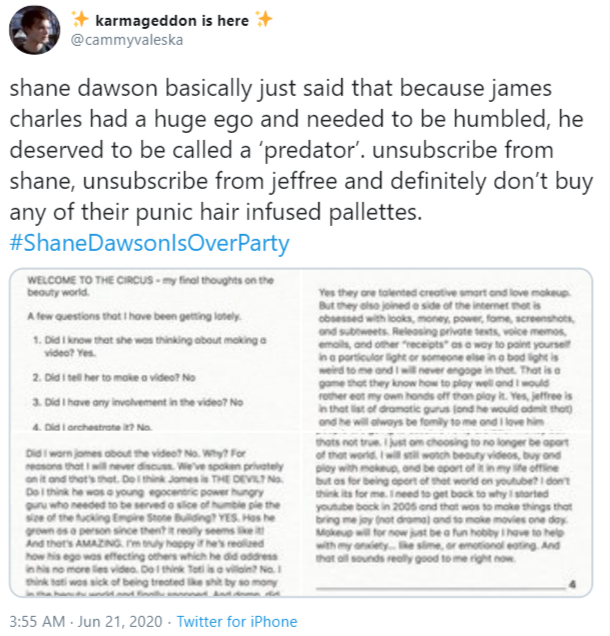 Shane Dawson has released a series of videos apologizing for past racist videos and jokes. For example, he apologized in 2014 in a video about wearing blackface. In 2019, Shane came under fire for previous jokes made about bestiality. Many of those previously addressed videos and more resurfaced on Twitter in June 2020. On June 10th, beauty YouTuber Kameron Lester took to Instagram to share his thoughts about Jeffree Star and Shane Dawson after having worked with them. In the video, Lester describes a situation in which both Dawson and Star negatively discussed James Charles months before the Tati Westbrook released the video “Bye Sister” and suggested that they instigated the feud to hurt his career (shown below). The video gained over 60,000 views in two weeks.

On June 11th, 2020, YouTuber and former friend of Jeffree Star Sanders Kennedy uploaded a video outline the racist remarks that Star has made throughout their friendship (shown below, left). The next day, a former employee of Star, Ashlye Kyle, uploaded a video saying that Star has blackmailed multiple people (shown below, right). The video accumulated over 342,400 views in 18 days.

On June 21st, Shane Dawson responded to the accusations that he was involved in Charles and Westbrook’s feud saying that he was not involved but Charles deserved “a slice of humble pie.” That say, Twitter user @cammyvaleska reposted the since deleted tweet saying, “shane dawson basically just said that because james charles had a huge ego and needed to be humbled, he deserved to be called a ‘predator’. unsubscribe from shane, unsubscribe from jeffree and definitely don’t buy any of their punic hair infused pallettes. #ShaneDawsonIsOverParty” (shown below). The tweet acquired over 10,500 likes and 1,800 retweets in nine days.

On June 21st, Shane Dawson tweeted, “I deleted everything. I’m done. For those who wanted me to “address it” I did. I’m sure u can find it reposted somewhere. But I don’t want this energy in my life or on my timeline. I’m too sensitive for this shit and I’m done” (shown below). The tweet gained over 173,800 likes and 13,400 retweets in eight days.

On June 25th, 2020, Twitter user @KRMGDN posted a video captioned, “TW//Creepy video where Shane Dawson and his ex-gf Lisa explain sex acts to a 12 year old and reenact them. Shane asks her if she has periods yet and jokes about c**k rings and semen. I’m speechless” (shown below). The tweet garnered over 1,300 likes and 680 retweets in five days.

TW//
Creepy video where Shane Dawson and his ex-gf Lisa explain sex acts to a 12 year old and reenact them. Shane asks her if she has periods yet and jokes about c**k rings and semen. I’m speechless. pic.twitter.com/zGbxaqo0Aj

On June 26th, 2020, DramaAlert uploaded a video reporting on multiple videos of Shane Dawson acting inappropriately towards minors, including the video of Willow Smith’s image (shown below, left). The video accumulated over 1.5 million views and 78,000 likes in two years. That same day, Shane Dawson uploaded a YouTube video called “Taking Accountability” in which he apologizes for and addresses some past videos and actions but doesn’t specifically mention the Willow Smith video (shown below, right). The video received over 10 million views, 539,000 likes and 322,000 dislikes in three days.
On June 27th, Twitter user @partykristin responded by tweeting, “shane dawson really was like “i apologized to my aunt for sexually harassing my 12 year old cousin and she said it’s okay because it’s funny and that’s how our family is” as if that makes it BETTER and not MORE TROUBLING” (shown below, left). Twitter user @nejicanspin also responded to the videos saying, “Shane Dawson is disgusting. He pretended to jerk off to a Willow Smith poster back when she was a minor. He and his ex girlfriend asked his 12 year old cousin gross questions and posted them on YouTube.He’s literally a pedophile. He’s got to go. #ShaneDawsonIsOverParty” (shown below, right). 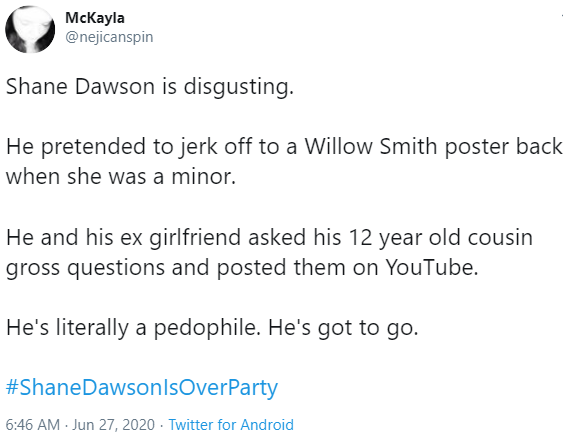 On June 27th, Jaden Smith tweeted, “SHANE DAWSON I AM DISGUSTED BY YOU. YOU SEXUALIZING AN 11 YEAR OLD GIRL WHO HAPPENS TO BE MY SISTER!!!!!! IS THE FURTHEST THING FROM FUNNY AND NOT OKAY IN THE SLIGHTEST BIT” (shown below, left). The tweet accumulated over 1.1 million likes and 180,700 retweets in two days. That day, Willow Smith’s mother, Jada Smith, also responded by tweeting, “To Shane Dawson … I’m done with the excuses” (shown below, right). The tweet acquired over 746,500 likes and 93,000 retweets in two days.

On June 28th, 2020, Blaire White uploaded the video “Bye Jeffree Star. You’re A Monster. (MY EXPERIENCE)” which outlined her experience with Jeffree Star saying that he is withholding information about big YouTubers being rapists and urged the victims to come forward (shown below) The video accumulated over 1.1 million views and 97,000 likes in two days.

On June 29th, 2020, the New York Times, Distractify and Cosmopolitan reported on the controversy noting that Jeffree Star and Shane Dawson has lost millions of subscribers and followers The next day, PopBuzz reported that all of Shane Dawson’s videos have been demonetized by YouTube. On June 30th, Tati Westbrook uploaded the video “BREAKING MY SILENCE …” (shown below). The video gained over 64,700 views in an hour. The 40-minute video describes how Westbrook was gaslit by Jeffree Star and Shane Dawson into thinking that she needed to end James Charles’s career. 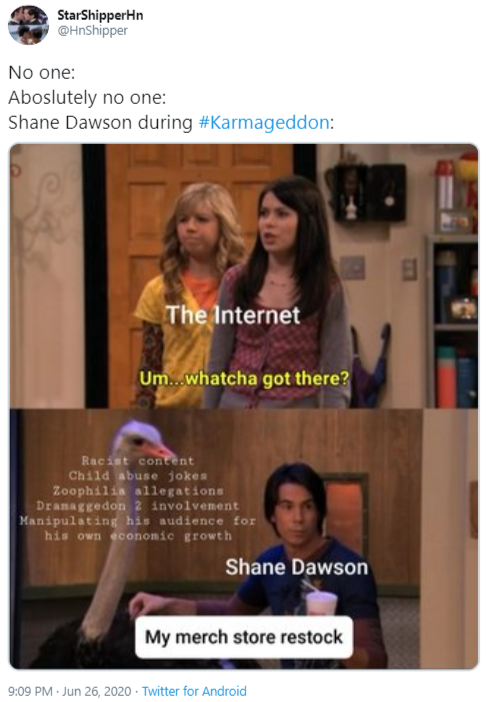 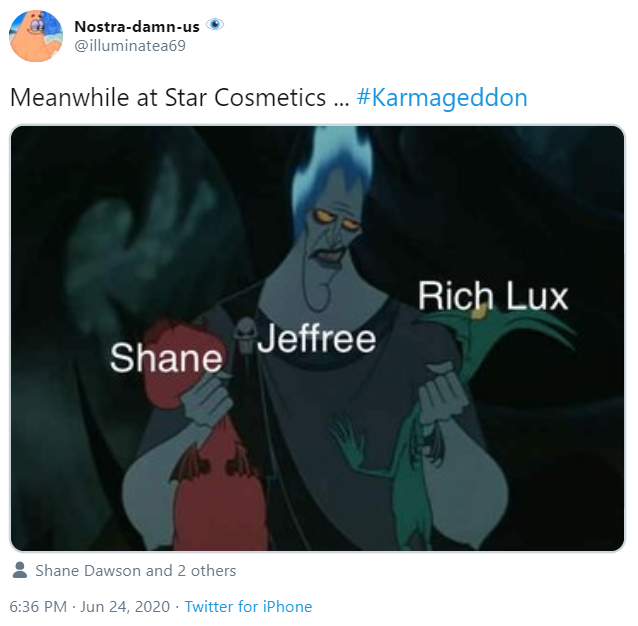 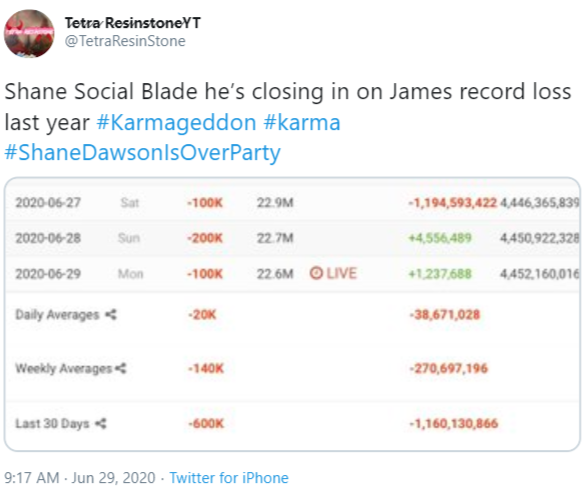 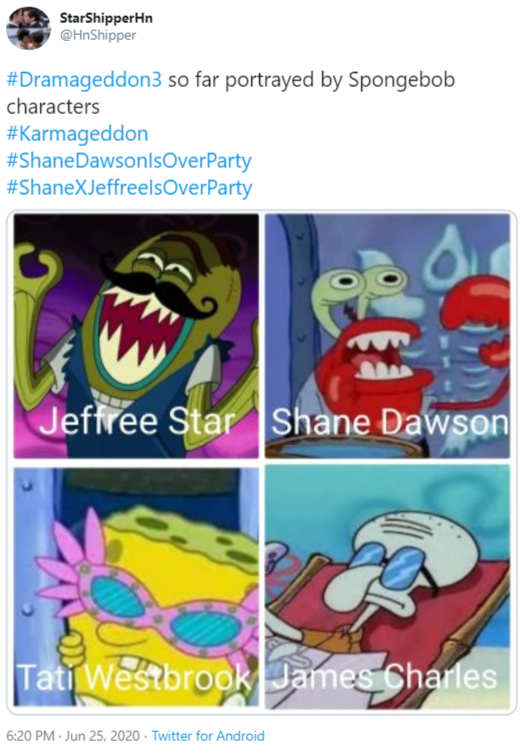 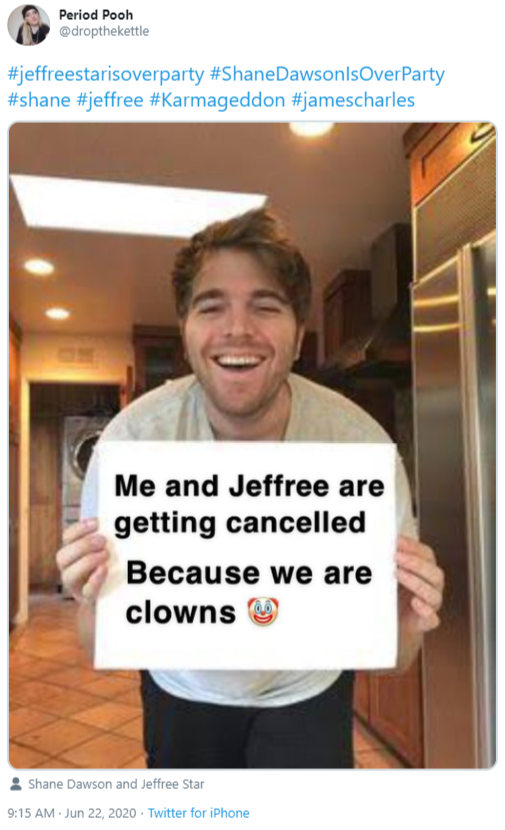 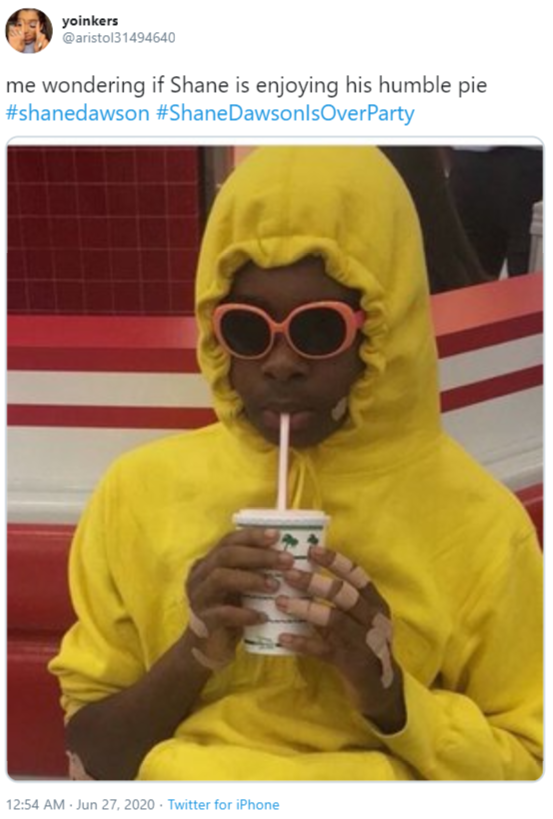