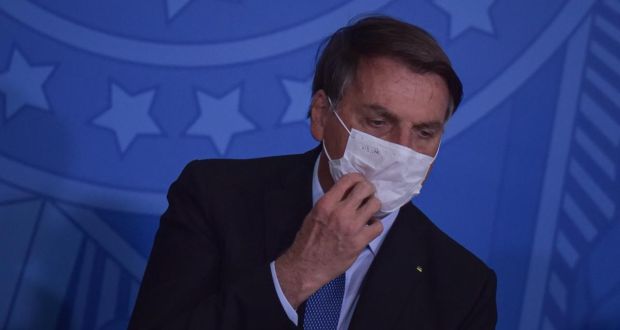 Brazilian President Jair Bolsonaro has tested positive for COVID-19 after months of downplaying the disease’s danger and mingling maskless in large groups.

The president, 65, told reporters in Brasilia earlier today that he is “well” and “normal” after being tested. “I even want to take a walk around here, but I can’t due to medical recommendations,” he said.

Bolsonaro also told reporters that he is taking hydroxychloroquine, an antimalarial drug that has not been approved as a treatment for COVID-19 by the World Health Organization or the United States Food and Drug Administration. Donald Trump made waves earlier this year when he announced he was taking the drug as a supplement to ward off COVID-19.

Bolsonaro has downplayed fear of the virus throughout the pandemic, arguing that shutting down the country would prove more harmful than the virus itself. Brazil’s COVID-19 death toll sits at 65,000, only trailing the U.S. Despite his positive COVID test, Bolsonaro stuck to his messaging, comparing the virus to rain in that it will affect most people and some older people should stay indoors to avoid getting sick.

“You can’t just talk about the consequences of the virus that you have to worry about. Life goes on. Brazil needs to produce. You need to get the economy in gear,” he said.

Bolsonaro was previously tested for COVID after meeting with Trump in Florida in March, a meeting that left some of his team infected.

Bolsonaro’s infection marks the second major world leader to have contracted COVID-19 after Boris Johnson was diagnosed earlier this year and progressed to the point where he was taken to an intensive care unit.