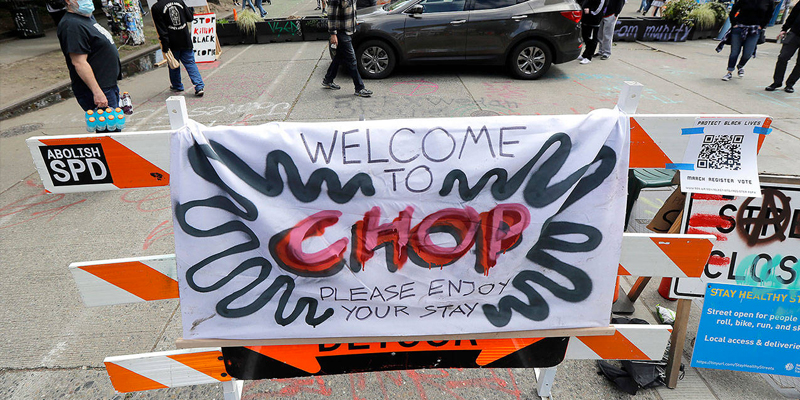 The Capitol Hill Autonomous Zone, a six-block area of Seattle’s Capitol Hill neighborhood currently occupied by activists and protesters demanding the defunding of Seattle’s police department, has redubbed the makeshift community the “Capitol Hill Occupied Protest” or “CHOP.” Activists residing in the area say that they changed the name to clarify the group’s intention, which is to protest policing in Seattle and not to succeed from the U.S. and become a full autonomous zone.

Starting last week, organizers at CHOP began to dispel rumors and refocus the narrative around the area. These clarifications include the acronym change, which some have claimed stands for “Capitol Hill Occupied Protest” rather than “Capitol Hill Organized Protest,” the official name for the area.

WE ARE #CHOP not #CHAZ stop spilling lies and spreading this narrative of being autonomous pic.twitter.com/wh0oxcCafy

Since launching last week, the area outside of Seattle’s East Precinct has become a national news story, with many in the conservative movement, including President Donald Trump, describing it as a terrorist take over.

Others in the conservative media have mocked the name change, goals and tactics of the protesters in the area, despite reporting misinformation and manipulated media. Fox News recently aired a segment on skirmishes in the area based on several Reddit comments quoting the anarcho-syndicalist scene from Monty Python and the Holy Grail. They believed the comments to be a real argument. Earlier this week, the channel also apologized for manipulating images in stories about CHOP and effectively creating the perception that the area has become a danger. These images include photoshopped images of an armed protester. Fox host Tucker Carlson, who aired images of the armed protester on his show, has repeatedly called for the protection of the 2nd amendment and gun owners in the past, including one that aired 24 hours after the Parkland high school mass shooting.

Fox is photoshopping the exact same image of an armed protester into multiple photos of #CHAZ (now known as #CHOP btw) lollllll pic.twitter.com/ijQfzHcZtl

However, some reports from people at CHOP claim that the area has been “peaceful” and “beautiful,” according to CNN. Additionally, images and video found on social media about area show people enjoying the protest area.

Finally made it down to support the #CHOPseattle and I can’t tell you how proud I am of my city. This place is wildly peaceful, open, and beautiful. #BlackLivesMatter #defundspd pic.twitter.com/IWCxEiacMp

Getting more calls and texts about #CHAZ — worried that it’s a scary place. It is not — Friday scenes from CHAZ / #CHOP — peaceful and chill. pic.twitter.com/lfk200jldy

Some footage showcases some of the issues found in CHOP, including how a “cop-free zone” deals with outside agitators. One video shows a man who claims to be a protest being escorted out of the area after breaking a window in the East Precinct.

Wow. This white man just broke a window in the East Precinct at the #autonomouszone and was peacefully escorted out. Listen to the exchange. #Seattlechaz #seatleprotest pic.twitter.com/8QzamzwoWI

CHOP was started as part of ongoing demonstrations in the wake of George Floyd’s death, a black man who died in police custody a former officer kneeled on his neck for nearly 9 minutes