Chrisposting refers to memes and parodies featuring Resident Evil protagonist Chris Redfield desperately trying to have fellow protagonist Leon Kennedy impregnate his sister Claire Redfield, often featuring excessive phrases such an “fuck my sister” and “continue the Redfield bloodline”. As the parodies grew in popularity, they eventually spread to other fandoms as well.

Following the release of the Resident Evil 2 Remake on January 25th, 2019, fans of the series quickly began to notice the flirtatious behavior of Claire Redfield towards Leon Kennedy. In less than a week, multiple videos began to appear on Youtube which pointed out these moments, most notably a scene where both characters are standing opposite of a locked gate.

Within the canon of the series, Chris and Claire Redfield are orphaned siblings and additionally the only family they have left — meaning that their bloodline will die out with them if neither produces offspring.

No Way Fag is a single panel art exploitable featuring Leon Kennedy’s rejection for “overtime” by Ashley Graham, the main female support character of Resident Evil 4, at the end of the game. A piece of fanart by artist Plague of Gripes parodying this scene grew in popularity over the years; also leading to Leon Kennedy becoming known as being oblivious to sexual advances by fans. 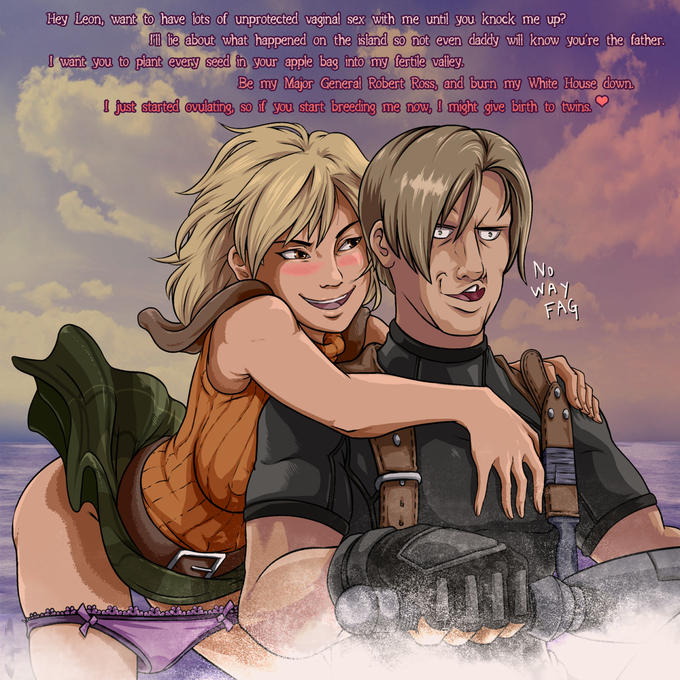 One of the earliest traceable parodies regarding the relationship between Leon and Claire was posted in a 4chan thread on January 28th, 2019 featuring greentext stories about Claire’s and Chris’ behavior at a Redfield family reunion (shown below). 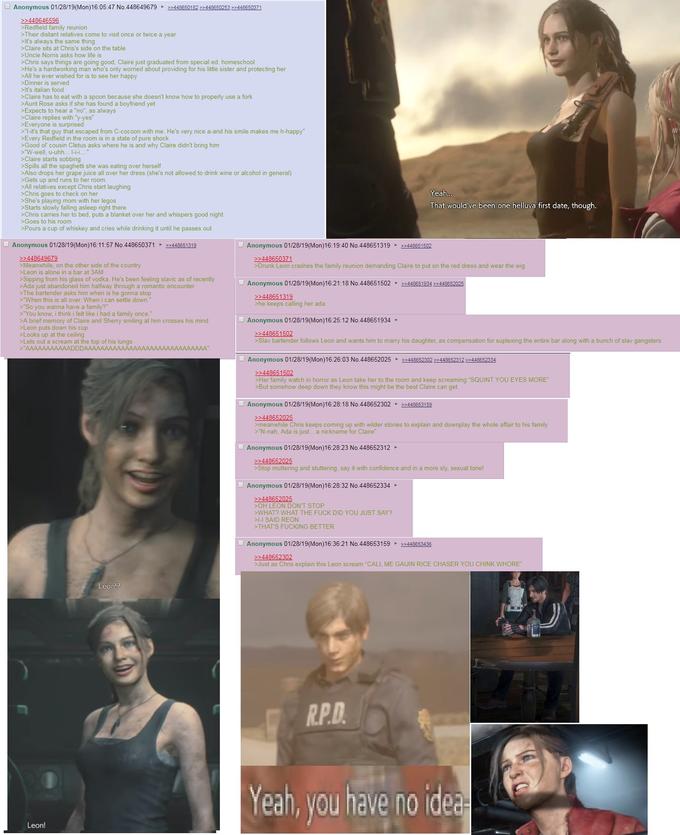 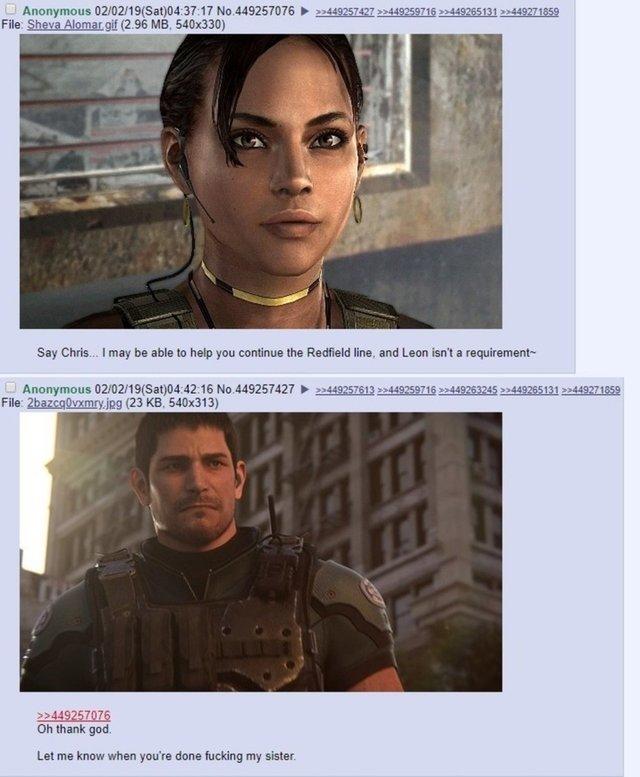 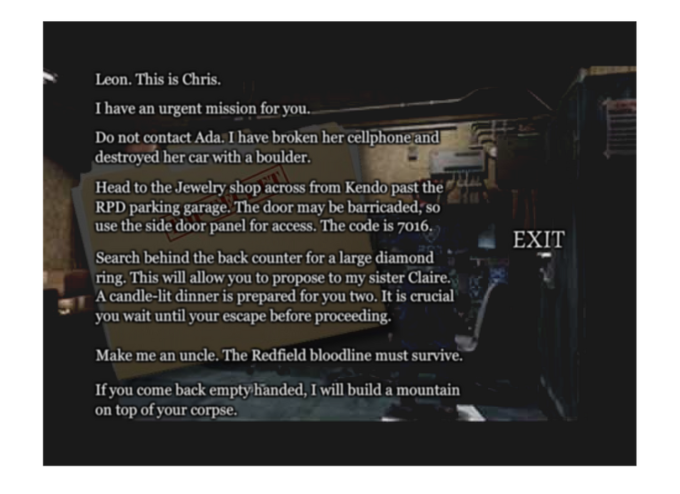 On February 8th, a video was uploaded to Youtube by user Chris Redfield titled “LEON!”, featuring Chris’ plan to have Leon impregnate Claire in the form of a song (shown below). Over the following 1.5 years, the video gathered over 620,000 views and 24,000 likes.
The spread of the jokes also caught the attention of Plague of Gripes, creator of the original No Way Fag meme, who shared another piece of fanart on February 8th on Twitter featuring Chris trying to seduce Leon with Claire (shown below, left) and gathered over 1,600 retweets and 6,700 likes. Another well-known parody was shared on Twitter by user @Storm_Jacket on February 9th, featuring Chris screaming at Leon and claiming she owns a cat called “Albert Whiskers”, a wordplay using known Resident Evil antagonist Albert Wesker; which managed to gather over 2,100 retweets and 5,500 likes (shown below, right). 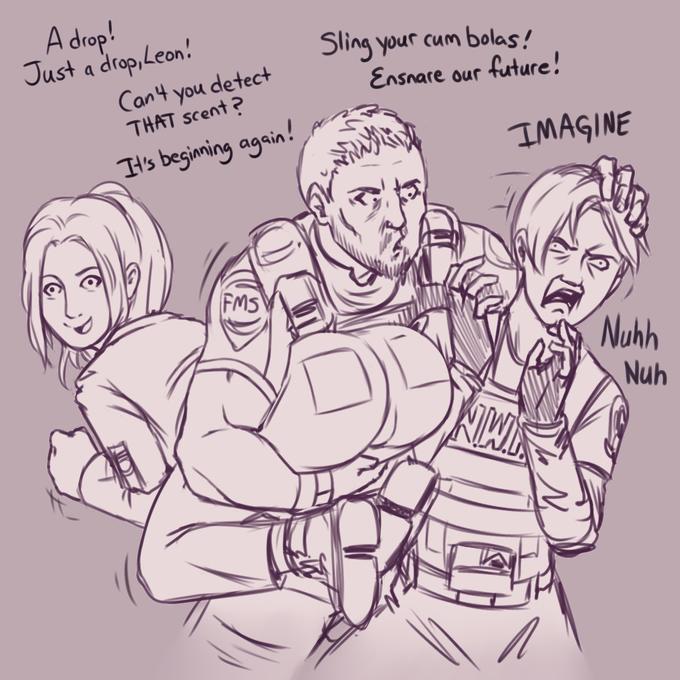 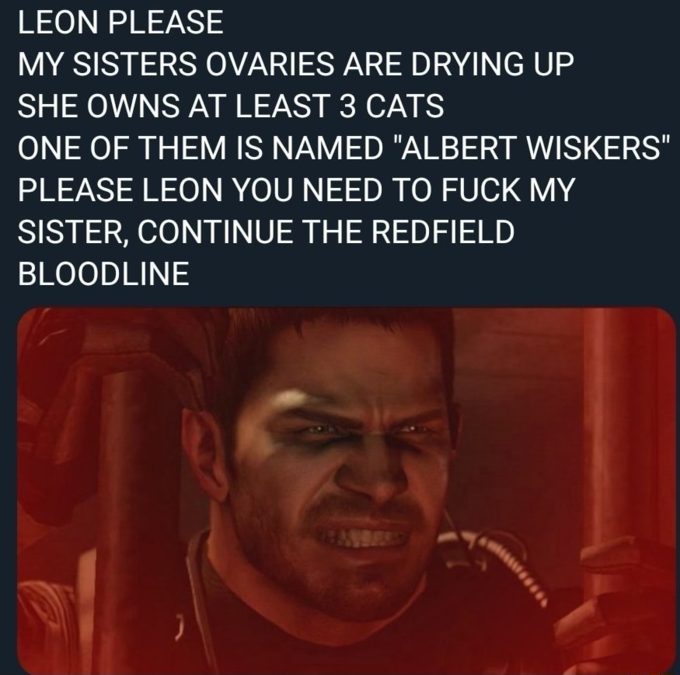 Twitter artist @dangerousbride, known for her comics featuring Leon with Resident Evil antihero Ada Wong, has also featured the meme in various comics with the earliest dating back to February 15th and gathering over 1,800 likes and 6,400 retweets (shown below, left). On May 12th, Youtuber Detective Masterclass uploaded a video featuring a voice-over from a scene from Resident Evil 8 where Chris and Rebecca Chambers managed to track down Leon (shown below, right) and managed to gather over 650,000 views and 43,000 likes. The video was inspired by a similar video by Youtuber Spazbo4 using default voices from February 5th. 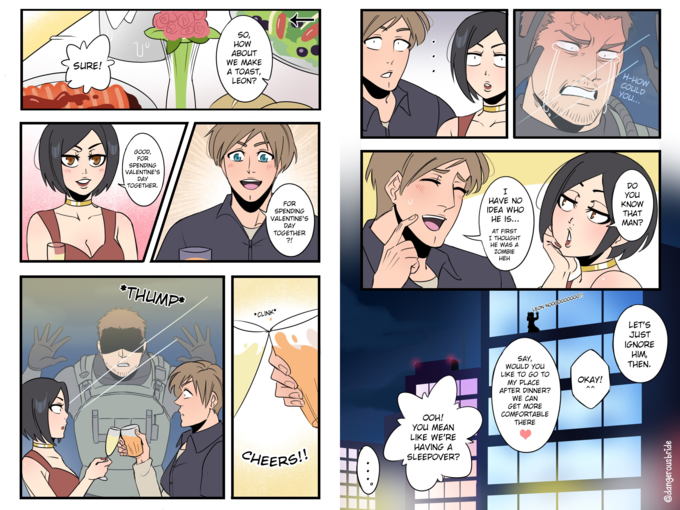 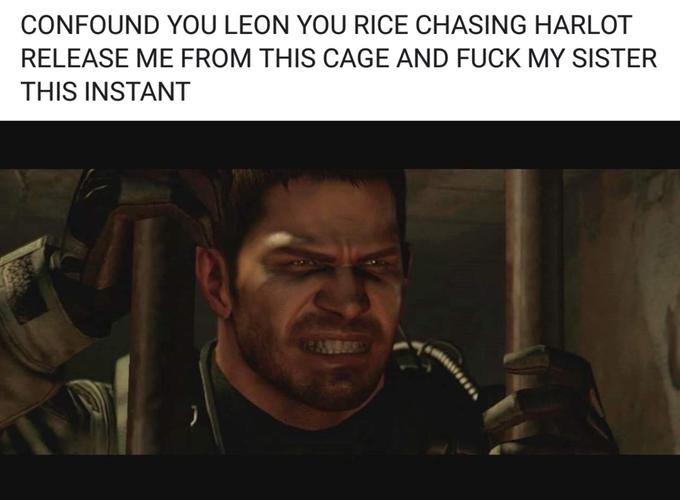 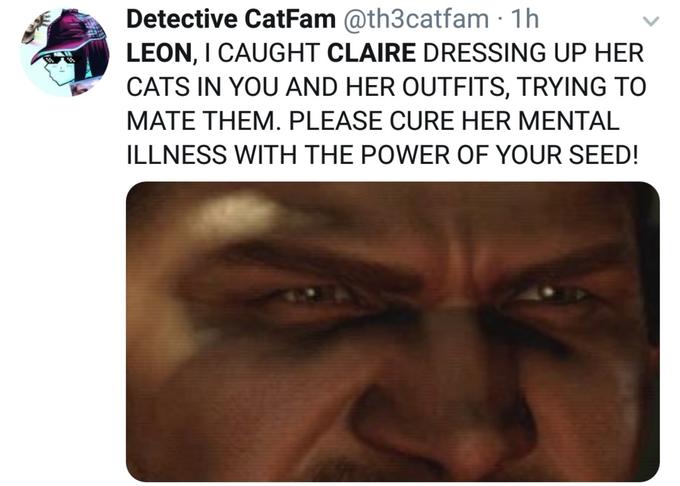 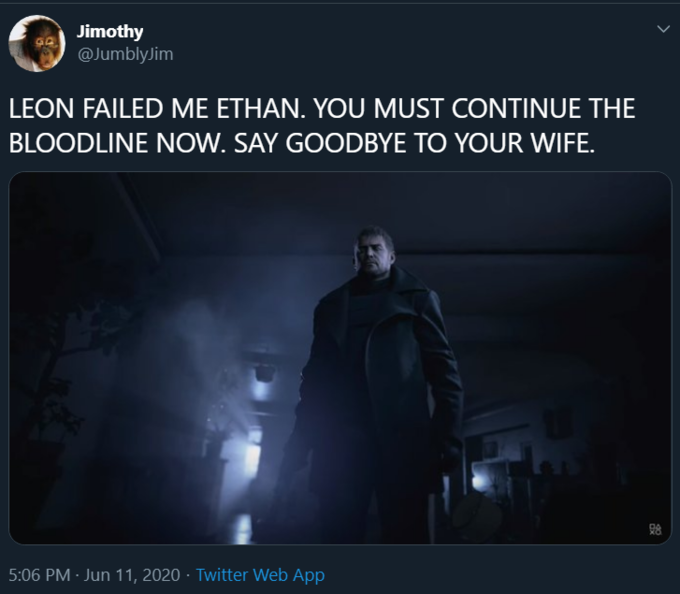 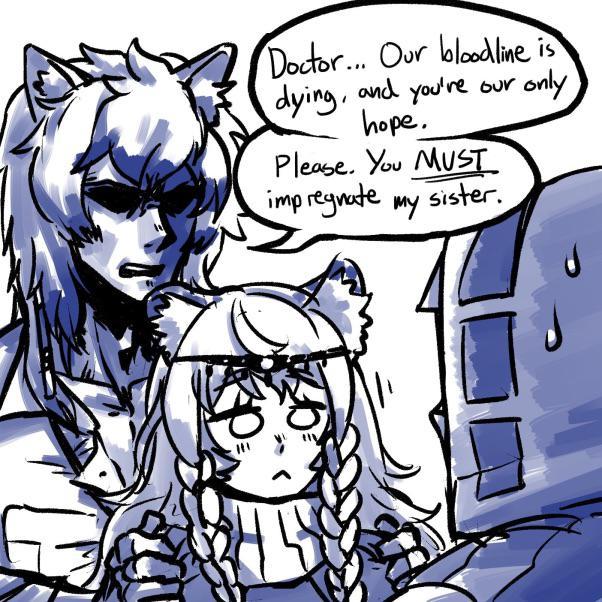 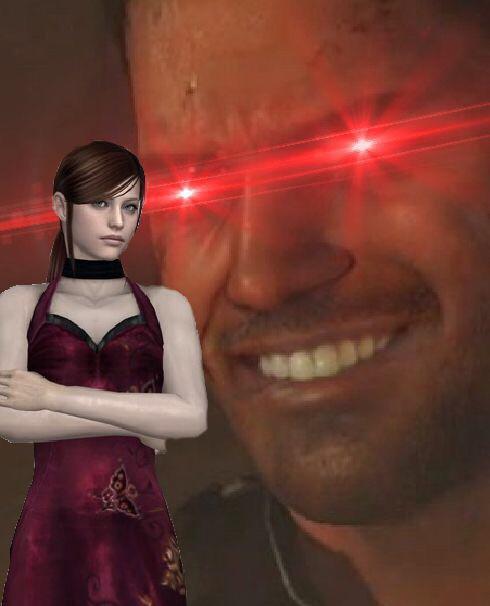 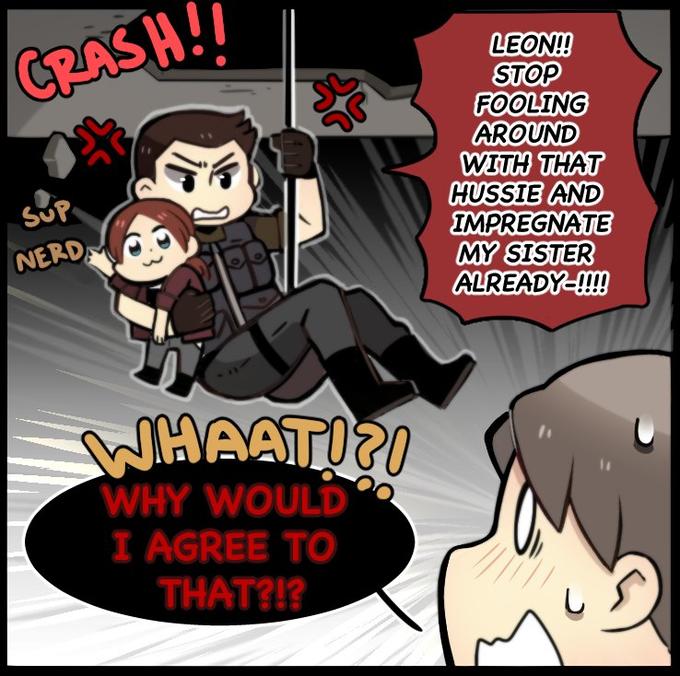 Isabelle's New Leaf Song Is A Bop
A New Format Is Being Used To Expose Crushes
Let's do it, boys!
I'm sorry what?