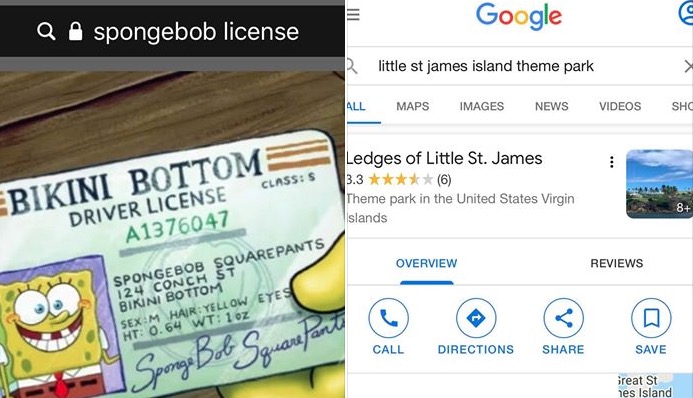 The great thing about conspiracy theories is you really don’t need all that much to create a truly outlandish one, as was proven this week by some viral posts claiming children’s cartoon SpongeBob Squarepants was connected to late sex trafficker Jeffrey Epstein and thus somehow normalizing pedophilia to children.

The theory began spreading on Wednesday when Twitter user @StormElliac tweeted a discovery that when typing SpongeBob’s address per his license (124 Conch Street, Bikini Bottom) into Google, Google Maps brings (or at least brought) you to Ledges of Little Saint James, a “theme park” that happens to be on Little Saint James, Epstein’s infamous island.

so can we talk about why spongebob’s address on his license is the address for jeffery epstein’s pedo island??? this is truly sick. all of these cartoons are tainted by pedophiles. our kids are not safe. 🤯 this is breaking my heart. pic.twitter.com/WQmKH4lhBZ

The claim spread on social media platforms like TikTok, where teens were aghast at the outrageous claim, apparently believing it to be proof of a SpongeBob/child-sex conspiracy.

So what’s going on here? According to Snopes, Google Maps can be easily manipulated, allowing online business listings to be “games” for fun and profit. The site points to an article in the Wall Street Journal that pointed this out last year. The article states, “Google Maps is overrun with millions of false business addresses and fake names, according to advertisers, search experts and current and former Google employees… The false listings benefit businesses seeking more customer calls by sprinkling made-up branches in various corners of a city.”

With this information, Snopes concluded that 124 Conch Street appearing on Epstein’s island was a spoof. Dispatch noted that the phone number listed with the address was once a promotional hotline for a SpongeBob movie and the line is now dead.

“No mercy for both”
Anonymous Asexual Webcomics Have Been A Vessel For Shitposting For Almost Two Years Now
The McDonald's Crucifixion Photo Has Risen, Once Again
The Horrific New Slang Word For Breaking Up On Zoom