A Los Angeles police officer claims to have received a tampon in his frappucino order at a local Starbucks. The claim spread when Twitter user and reporter Bill Melugin posted about the incident. Because the officer paid with a police union debit card, he believes it could be a targeted attack. The LAPD is investigating the allegation.

While the alleged crime is certainly heinous, many doubt the veracity of the officer’s story. Former Starbucks employees noted that there usually wouldn’t be enough time between the making of the frappucino and the delivery to the customer to sneak off to the bathroom and spike the drink with a tampon.

I’ve worked at starbucks, I don’t believe it. You have to ask for breaks ahead of time and was your hands after, you can’t leave drinks undone or someone else does them…usually it only takes 60 seconds and you’re in view. Also, you can’t tell it’s a police credit card lol

Other women noted that the item in the photograph didn’t look like a tampon. Twitter user and author noted “Some of you have never changed your drunk girlfriend’s tampon and it shows” (which opened up a whole nother can of worms on Twitter, but that’s another story).

Only a man could look at this skinned rabbit of a gigantic thing and assume it’s something a woman just easily pulled out of her vagina. Lads, no. Not unless she had access to a cheese grater in the 60secs between yanking it out and jamming it in a cop’s Frappuccino https://t.co/8cyuEfJKHf

Fox reporter: A TAMPON IN HIS FRAPPUCCINO OH THE HORROR

Everyone with a vagina: Dude, that’s not a tampon. https://t.co/PxQd4u212w

Jezebel published an experiment where they placed a tampon inside a frappucino to see if it came out resembling the item in the photograph. The result of their admittedly informal experiment showed that the tampon did not resemble the alleged tampon in the photo. 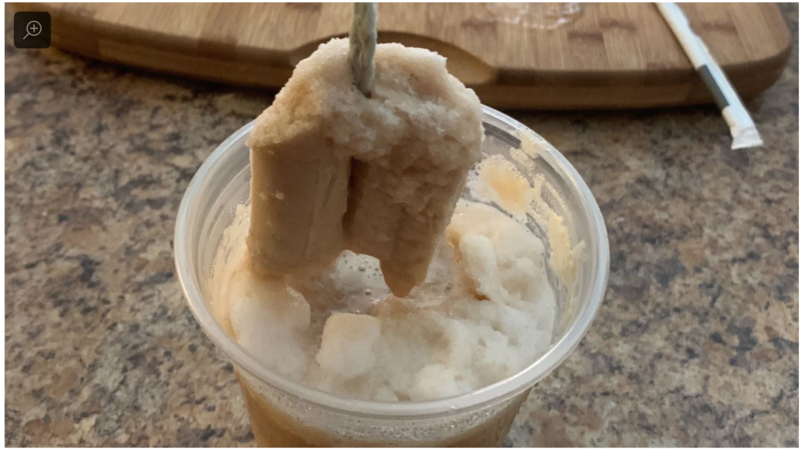 The speculation led some to believe that the alleged “Tampon Frappucino” was yet another incident of police officers making up stories of anti-cop bias in the service industry. Recently, NYPD brass alleged that Shake Shack had intentionally poisoned police officers with bleach before it was revealed that the officers that were “poisoned” were never sick. Last week, an officer had a viral meltdown after she didn’t promptly receive her McDonald’s order. Last December a Kansas police officer admitted to writing “Pig” on his McDonald’s coffee in an attempt to stir up sympathy for police.

Yes, but was the tampon soaked in bleach before they put it in his Frappuccino?

Cops have been doing some pretty fucked up shit to get sympathy from the public lately.

I’m going to assume the cops are guilty until proven innocent, just like they treat black people. https://t.co/8yu6Ht49zY

While the LAPD investigation into Tampon-gate is ongoing, Twitter users seem to have a pretty good idea of what they think is really happening.