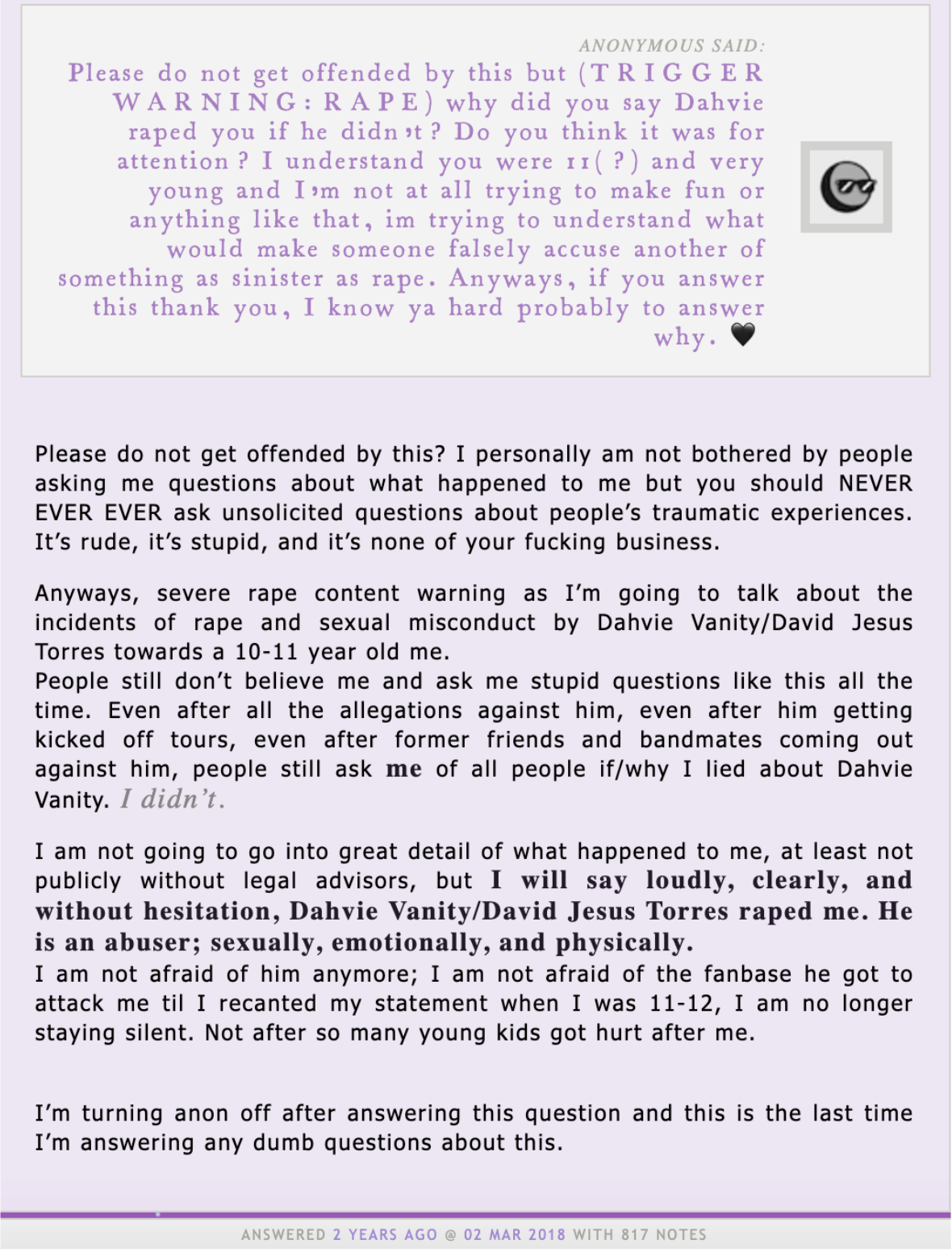 Roughly one decade after the name Jessi Slaughter spread across the internet in a wave of harassment and ridicule, Damien Leonhardt is ready for their day in court.

Leonhardt, who now identifies as non-binary, is previously known as “Jessi Slaughter,” the 10-year-old victim of a massive cyber-bullying campaign after they were rumored to be in a sexual relationship with Blood on the Dance Floor singer Dahvie Vanity (real name: Jesus David Torres) in 2010. Around that time, many believed her to be faking the relationship with the singer, when she and her late-father went viral with a video plead to stop the harassment known colloquially as “Ya Done Goofed.”

In a new investigation by Insider, Leonhardt states that Torres “began molesting them in April 2009, when Leonhardt was 10 and Torres was 24.” More than 20 other women have accused Torres of sexual assault, many of whom claim they were minors at the time of the attack.

Torres’s lawyer denied the allegations on behalf of their client, calling the accusations “inflammatory and libelous.”

The rumors around Leonhardt’s involvement with Torres launched a wave of harassment from both fans of Torres’ music and the 4chan /b/ board. The attacks led to the filming and release of the infamous “Ya Done Goofed” video, which later became a popular meme and helped bury their claims. Due to the abuse, Leonhardt publicly denied the rumors and apologized to Torres.

Later, Leonhardt attempted to walk back this retraction since then. In 2013, they wrote, “Dahvie is a rapist,” on Tumblr. They later elaborated on why they contradicted the previous accusation:

“Because I don’t care if he sends his fans after me. I don’t care anymore. Also; I never accused him in the first place, a person I knew who was mad at me said I did and everyone believed it. yes I went allong with it cause I was a stupid kid, but the original rumor was not my fault. 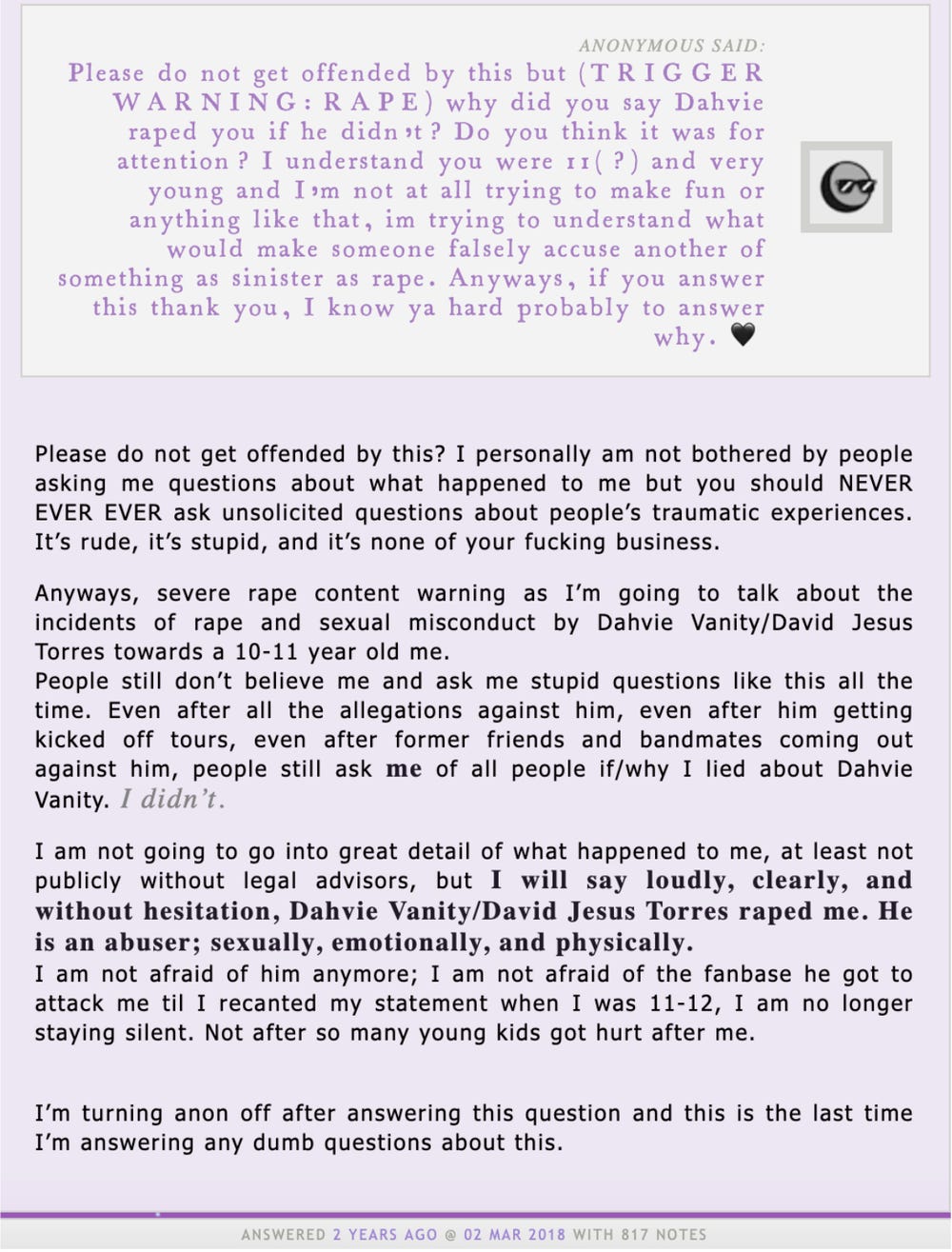 This behavior is not uncommon, particularly among child victims of abuse, Dr. Veronique Valliere, a clinical and forensic psychologist, tells Insider.

“A 12-year-old doesn’t appreciate the consequences of their actions in general,” Dr. Valliere said. “If telling brought down unintended consequences like bullying, punishment of the offender, destruction of the family, embarrassment, or shame, the easiest thing to do is just take it back. So people do that all the time. Even adults do it when they say something or do something and there are unintended consequences, and they say, ‘Oh, I was just joking.'”

“For many reasons, the victim may protect the offender, especially if they care for the offender. In hindsight, we understand sexual abuse as exploitative and damaging, but a child in the process of it may not see that, and a child entering pubescence or adolescence is especially vulnerable to being convinced they’re in love and that it’s a consensual relationship when it’s not. It’s only later that both psychologically and emotionally they identify what they’ve been through as abuse.”

On March 25th, 2020, Leonhardt appeared on Chris Hansen’s YouTube show “Have A Seat With Chris Hansen” to speak out against Torres. Hansen has made numerous videos about Torres, interviewing several victims, as well as Youtuber Jeffree Starr, a former associate and friend of Torres.

Insider notes that “an FBI special agent interviewed Leonhardt and two women who have also accused Torres of sexual assault, though no charges have been filed. Those two women, in addition to Leonhardt, told the FBI that Torres sexually assaulted them when they were underage. Both women provided Insider screenshots of correspondence with the same FBI special agent.”