David Lynch Weather Reports refers to a series of web videos hosted by American David Lynch in which, from his studio, he looks out the window and reports on the weather in Los Angeles, California. The videos began in the mid-2000s on his website, DavidLynch.com. In 2020, the videos returned amid the coronavirus pandemic quarantine. Most of these reports end with the director saying that he expects “blue skies and golden sunshine.”

Lynch began posting these weather reports in the mid-2000s, with the post on May 21st, 2005 being the earliest archived by the Internet Archive. However, on July 1st, 2016, Twitter user @eric_x13 published a video featuring Lynch and actor Laura Dern from February 1st, 2005 (shown below).

On May 11th, 2020, Lynch revived the videos on his YouTube channel David Lynch Theatre. The first post in the series received more than 300,000 views in less than three months (shown below).

Days later, on June 5th, Twitter user @ericallenhatch tweeted a screenshot of the video and wrote, “the ultimate sign we have fucked up as a society: David Lynch having to make an explicit political statement.” The tweet received more than 28,000 likes and 5,100 retweets in less than two months (shown below). 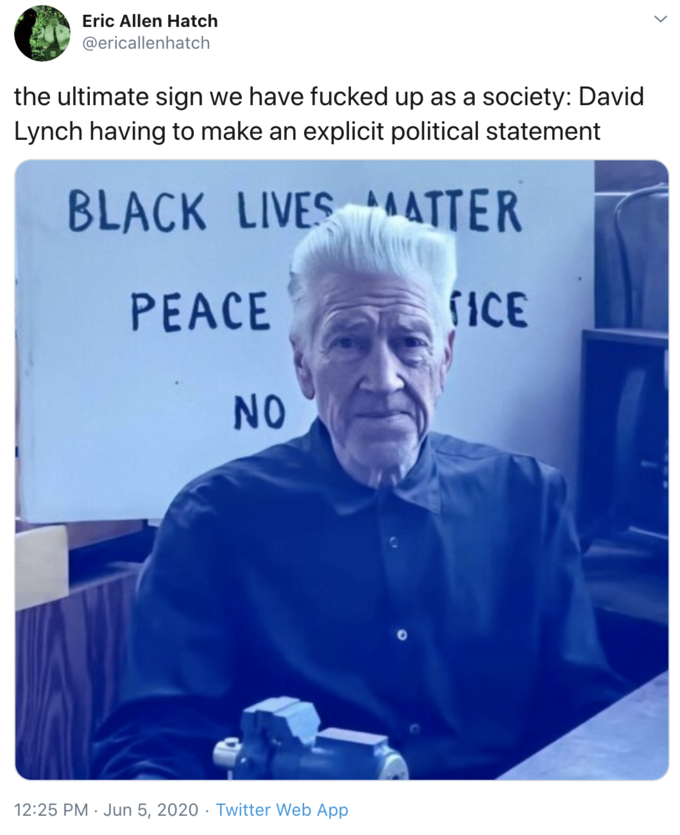 David Lynch Text” class=” kym-image image-auto-link” id=”photo_1878813″ title=”the ultimate sign we have fucked up as a society: David Lynch having to make an explicit political statement”>

Several media outlets have covered the reports, including The Daily Beast, Brooklyn Vegan. IndieWire, Consequence of Sound, Thrillist and more.

Super Dad Makes Death Stranding Pod For Baby In Time Of Coronavirus
Panic! at the Disco Tells Trump To Eff Off After He Used Their Song At A Campaign Rally
Say thanks!
Get In The Christmas Spirit With These Holiday Light Show Videos