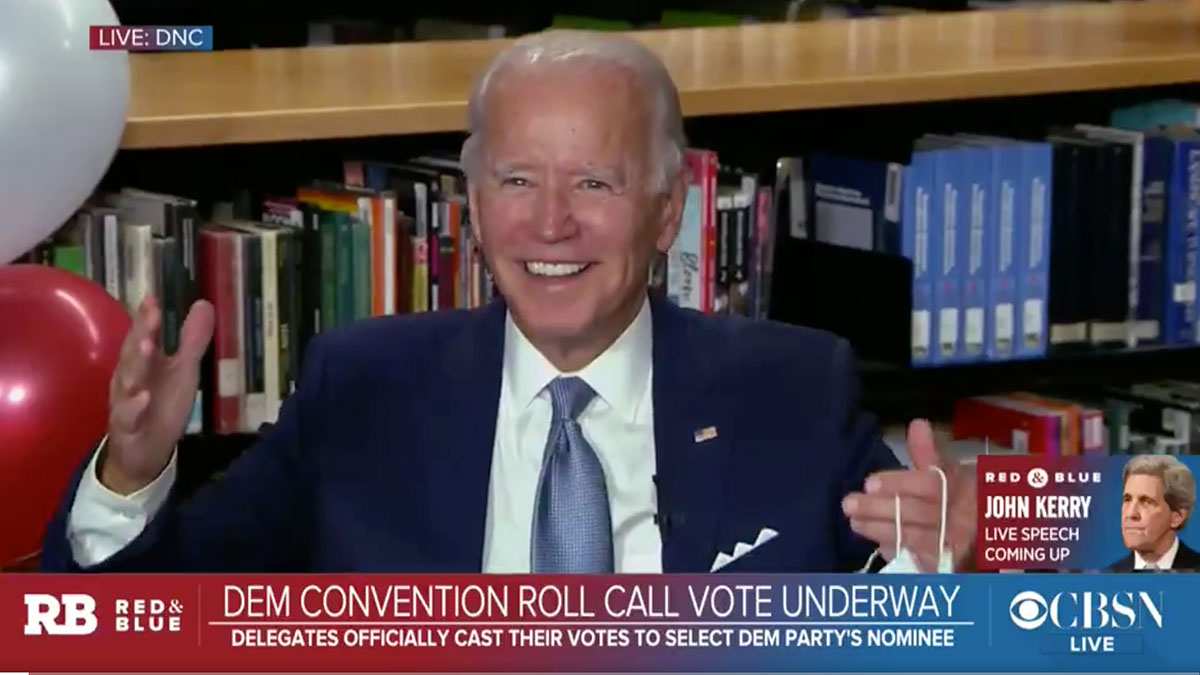 Night two of the Democratic National Convention was a muted affair, even compared to night one. While Vice President Joe Biden formally accepted the Democratic Party’s nomination for president, the Zoom-call feel of the evening kept things remarkably quiet for such a historic evening. The lack of fanfare and delegates in funny hats highlighted the formality of the evening, creating some confusion over the proceedings.

Jacquelyn Brittany, a New York Times security guard that met Joe Biden in December in an elevator ride captured on the Times’ TV show The Weekly, nominated Biden for president.

“I take powerful people up in my elevator all the time,” Brittany said in her nomination video. “When they get off, they go to their important meetings. Me, I just head back to the lobby. But in the short time I spent with Joe Biden, I could tell he really saw me. That he actually cared. That my life meant something to him. And I knew, even when he went into his important meeting, he’d take my story in there with him.”

Biden’s interaction with a mailroom worker in the @nytimes elevator was honestly the highlight of the episode: pic.twitter.com/gocSQlOLXc

In a first for the convention, the DNC held a virtual roll call, in which delegates from 57 states and territories cast their vote via prerecorded video. Traditionally, when the convention is held in a centralized location, delegates give their nominations in person. However, due to the coronavirus, organizers scrapped an in-person convention to avoid further spread of the virus.

The virtual roll call was not without issue, though. As part of the party rules, candidates who reach a certain threshold of votes received a nomination at the convention, which is why UAW Union President Bob King and U.S. Representative Alexandria Ocasio-Cortez nominated Bernie Sanders for president fo the United States.

The party’s rules weren’t exactly clear to everyone, especially if they were following NBC News last night. They tweeted, “In one of the shortest speeches of the DNC, Rep. Ocasio-Cortez did not endorse Joe Biden.” They later clarified that the tweet “should have included more detail on the nominating process.”

This tweet should have included more detail on the nominating process.

We have deleted the tweet to prevent its further spread, but it can be seen here for the record. pic.twitter.com/txXo4CCMOt

AOC, who has become a lightning rod for controversy among liberals and conservatives, did not appreciate their depiction, holding the network responsible for an “incredible amount of damage and misinformation.”

So @NBCNews how are you going to fix the incredible amount of damage and misinformation that you are now responsible for?

Because a 1:15am tweet to slip under the radar after blowing up a totally false and divisive narrative across networks isn’t it. https://t.co/zf6Wqiotvv

The tweet from NBC was unnecessary though. Representative Ocasio-Cortez had already cleared up the confusion caused by her nomination of Sanders in an earlier tweet.

If you were confused, no worries!

I was asked to 2nd the nom for Sen. Sanders for roll call.

Overall though, many online seemed pleased with the virtual roll call. Not only did it keep things safe and everyone socially distant, but it also kept the event moving forward. People also praised the diversity of delegates, lack of commercials

I move that that we permanently do the virtual roll call, even when conventions return. This is beautiful and dynamic and entertaining. All those in favor? #DemConvention

Virtual roll call vote from each state is really working.

The diversity of this roll call is beautiful. #DemConvention #rollcall

Hands down – best Roll Call Vote I’ve ever seen at any convention.

that roll call, unbroken my commercials, is the best piece of political theater i’ve seen in years

do we really need to go back to regular conventions after this?

This “Around America” roll call is actually pretty cool.