Song of the South is a live-action-animated musical Disney anthology film set in the Reconstruction era following the United States Civil War. Disney’s first live-action musical, the film has been the source of controversy since its release. Critics have chastised the film for the racist depiction of Black Americans and its portrayal of the American south during the Reconstruction. Disney has not released a home video version of the film in its entirety, though, portions, particularly the song “Zip-A-Dee-Doo-Dah,” have appeared on compilations of Disney songs. Characters from the film also appeared in the Disney theme park attraction Splash Mountain, until 2020, when Disney announced re-theming of the ride.

On November 12th, 1946, the film premiered in Atlanta, Georgia (1972 trailer below). The film was re-released several times over the next several decades, including 1972 and 1980. Disney ceased airing the film in its entirety after 1986 in the United States, but the uncut film has aired in the UK and Europe in 2006.

Elements of the film, particularly the “Zip-A-Dee-Doo-Dah” segment, remained a part of the Disney releases. A version that cut the controversial “Tar Baby” scene appeared on the Disney Channel until 2001.

Despite being largely removed from the Disney canon, in 1986, characters from the film, including Brer Rabbit, were used as the primary theme for the Disney theme park attraction. In 202, Disney announced the ride would be updated, removing elements from the film.

Since the release of the film, many complained about the film’s portrayal of Black Americans, with critics accusing the film of relying on racist stereotypes. Upon its release, Walter Francis White, the executive secretary of the National Association for the Advancement of Colored People (NAACP) denounced the film in a statement. He wrote:

The National Association for the Advancement of Colored People recognizes in Song of the South remarkable artistic merit in the music and in the combination of living actors and the cartoon technique. It regrets, however, that in an effort neither to offend audiences in the north or south, the production helps to perpetuate a dangerously glorified picture of slavery. Making use of the beautiful Uncle Remus folklore, Song of the South unfortunately gives the impression of an idyllic master–slave relationship which is a distortion of the facts.

In 1947, audiences protested the film at theaters. The protests also included wide-spread boycotts of the film because of the racist portrayals in the film. As a result of the controversy, re-releases of the film have been rare since its release, with Disney distancing itself from the film. 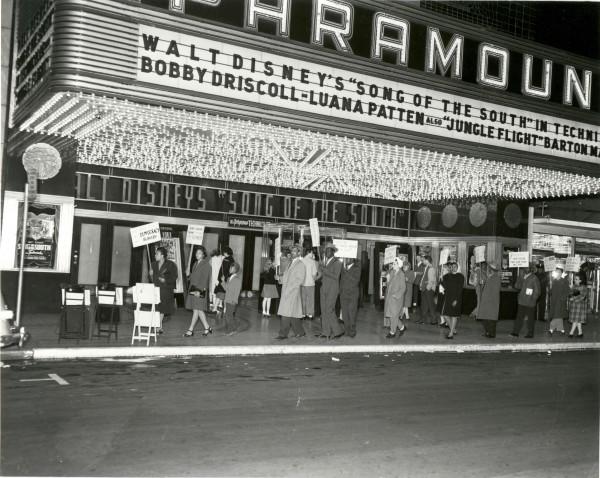