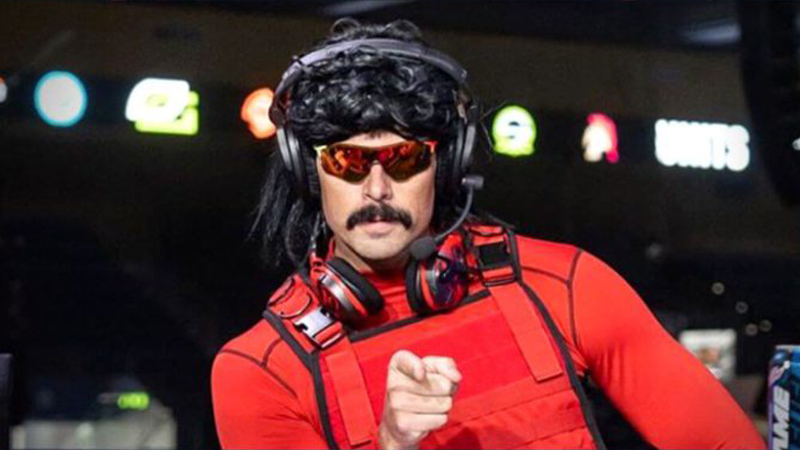 At the end of June, renowned Twitch streamer Guy Beahm, best known by his online alias Dr DisRespect, was suddenly and permanently banned from the platform with little information given as to why. Since then, Beahm, Twitch and the industry insiders who initially claimed they knew why he was banned have all remained silent on the topic, leading to a slew of wild conspiracy theories and speculation on social media.

Earlier today, Beahm finally broke this silence in a new pair of interviews with The Washington Post and PC Gamer. While they don’t include any particularly juicy details surrounding the reason for the ban, they do provide some previously unknown insight into what Beahm’s been up to since his expulsion, and what might be next for his career as a streamer.

According to The Washington Post, the 38-year-old streamer, known for his brash showmanship, was uncharacteristically somber and reserved in his first interview since the ban. His measured responses during the course of the 30-minute interview largely stemmed from Beahm’s legal counsel, as he is potentially in the midst of pending legal action regarding the ban. In a similar response with PC Gamer, Beahm said they “are considering taking legal action,” but left it at that.

Despite this, Beahm did respond to the inquiry about why he was banned but continues to reiterate that he still doesn’t know the true reason behind Twitch’s decision. When PC Gamer asked about his communication with Twitch, Beahm said they simply cut off contact with him.

“Honestly, we just don’t know. It was a total shock,” he told The Post. “Imagine showing up to work and the doors are closed and you can’t get inside. You’re going, ‘What’s going on?’ And you’ve been told you’ve been fired. But you haven’t been told the reason why. We just weren’t given an answer. It was the worst feeling.”

Twitch has not notified me on the specific reason behind their decision… Firm handshakes to all for the support during this difficult time.

When asked how he first learned about his removal from the platform, Beahm said he was watching a friend’s stream that day but noticed many of his usual features as a creator on Twitch were missing. He then sent an email to Twitch inquiring about the issue, only to receive a reply that he was banned, with no reason provided.

Because of the mystery surrounding his ban, theories of all types have been shared across the web since the end of June. From shungite conspiracies to allegations related to the “#MeToo” movement that’s been sweeping the gaming industry in the last several months, Beahm ultimately declined to address any one specific theory, and said to The Post, “It just goes back to just me not being interested in engaging crazy speculation. You know, I have a great community, loyal fans.”

At one point with PC Gamer, the interviewer attempted to press on the potential cause surrounding Beahm’s on-stream discussion of 5G coronavirus conspiracy theories and David Ike’s documentary, but his reply was quickly cut short by a publicist who said, “We’re getting really close to dangerous territory here. So, you know, Doc, we don’t know why Twitch banned him, and there is no formal warnings or reprimand on record. That’s all legal is going to let him say.”

Many online also pointed to his final moments during the last Twitch stream as a potential source of information on the ban, but Beahm also denied those claims and stated he was simply stepping out of character and having a personal connection with his audience.

Beahm also told The Post that some of his preexisting deals outside of Twitch with other partnerships were unaffected by the ban and ensuing media storm, alluding to a potential roadmap of what’s in store for Dr DisRespect when he does make a return to streaming. One such deal is the development of a TV show with SkyBound Entertainment, which Beahm said was still in the works. Still, he and his team were tight-lipped about any potential moves to a new streaming platform, which will likely come down to either Facebook Gaming or YouTube now that Mixer is fully going offline in the coming week.

During the interview with PC Gamer, Beahm said that he and his team were working behind the scenes on his eventual return, but only alluded to the fact that they weren’t interested in exclusivity with any particular platform.

“I’m more focused on just making sure whatever we do next, whether it’s a platform move or not, that it’s the right decision for the community and Champions Club that follows me,” he told PC Gamer “And that makes sense to what I want to continue to accomplish with this character in terms of taking things to the next level, and whether it’s streaming or outside of streaming.”

Interestingly, PC Gamer did add a note that Beahm followed up to his response with an email that stated he’s also considering streaming independently on his Championsclub.gg site, perhaps additionally to something like Facebook Gaming or YouTube. In the end, however, what exactly Beahm and his team’s plans are for the return of Dr DisRespect are still unanswered, so the internet will continue to speculate.

As mentioned at the beginning of this article, industry insiders who claimed to know the true reason for the ban when it was first announced have said little aside from vague claims of “we know what really happened.” PC Gamer pressed Beahm on this at the end of the interview, but his reply was short and stern. When asked what he made of such claims, particularly Rod “Slasher” Breslau (who PC Gamer said was reiterating his knowledge of the ban’s reason just yesterday during a stream), Beahm flatly stated that he wasn’t interested nor going to engage in any “crazy speculation.” As they attempted to get a response from Beahm in a follow-up question, he simply replied, “No.”

After both of the interviews were published earlier today, Breslau acknowledged them on his Twitter account and said, “a bunch of publications ran DrDisrespect interviews as straight up CAA-backed puff pieces with absolutely no new information, nonsense answers, and as should be obvious, still zero explanation on why he’s banned. a collective fail from the media here.”

a bunch of publications ran DrDisrespect interviews as straight up CAA-backed puff pieces with absolutely no new information, nonsense answers, and as should be obvious, still zero explanation on why he’s banned. a collective fail from the media here

Cecilia D’Anastasio, a reporter for Wired magazine, also tweeted about the newly released interviews and said, “You don’t have to run an interview if you didn’t learn anything new. Just some free editorial advice.”

You don’t have to run an interview if you didn’t learn anything new. Just some free editorial advice

Until whatever potential legal action between Beahm and Twitch concludes, a source who “really knows what happened” comes forward with a solid answer or Twitch itself releases an official statement on the reason for the ban, it seems as though the mystery behind Dr DisRespect’s ban will remain unknown … for now at least.