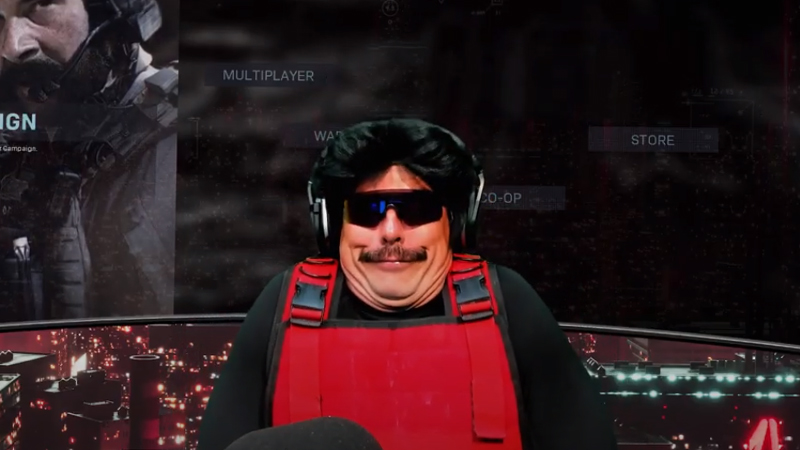 More than a month after Dr Disrespect’s mysterious ban from Twitch, Guy Beahm has finally made his big return to streaming — only this time, he’s live on YouTube. The circumstances surrounding his expulsion from Twitch are still unknown, but what little he’s said about the future of his career is that he has no plans to give it up.

Yesterday afternoon, the iconic streamer went live for the first time since the end of June via his YouTube channel, but had yet to make an official appearance. Despite the livestream only displaying some of Beahm’s branded imagery, over 300,000 viewers tuned in to see what was happening.

About an hour after the stream began, Beahm then took to his Twitter and let eager fans know that his return would come today, with the message, “Tomorrow, we arrive.”

At around 3:30 this afternoon, a 30-minute countdown began slowly ticking down, and when he finally appeared with a viewer count reaching upwards of 400,000 (higher than the entire viewership of Twitch’s most-viewed category at the time), Beahm was seen fumbling with cables and said, “I don’t know what to do with this [cable]. I’ve never streamed on YouTube before.” A highlight reel and intro to his channel followed shortly after.

Upon the official start, Beahm briefly addressed the recent banning from Twitch, but only reiterated that “we still have no idea,” ultimately giving no additional information to the over 460,000 people watching at its peak. As the stream continued, he discussed some various games that he played in the past, such as Escape from Tarkov, before hinting at some future titles his channel might explore in the future, like Fall Guys.

Beahm stated several times that his stream today was “unplanned” and “unscripted,” so it’s no surprise that most of it was fairly random, including skits, thanking his fans and the Champions Club, giving shoutouts to donations and touching on games he’s planning to play in the weeks to come. Despite his previous viewer count reaching nearly half a million, the total continued to steadily drop to around 350,000 after half an hour since the beginning. At the time of writing, Beahm was seen reacting to the Halo Infinite demo.

You can check out the stream below, which is currently ongoing, to see more of what Beahm’s up to with his big return … just don’t expect to get any juicy answers as to why he was banned from Twitch. At this point, maybe we’ll never know for sure.

Srs Bsns: Everything You Need To Know About The TikTok-Oracle Partnership
Where do they go?
Hell Yeah
For Seven Years, Scots Wikipedia Was Vandalized By A Furry Who Didn't Know Scots