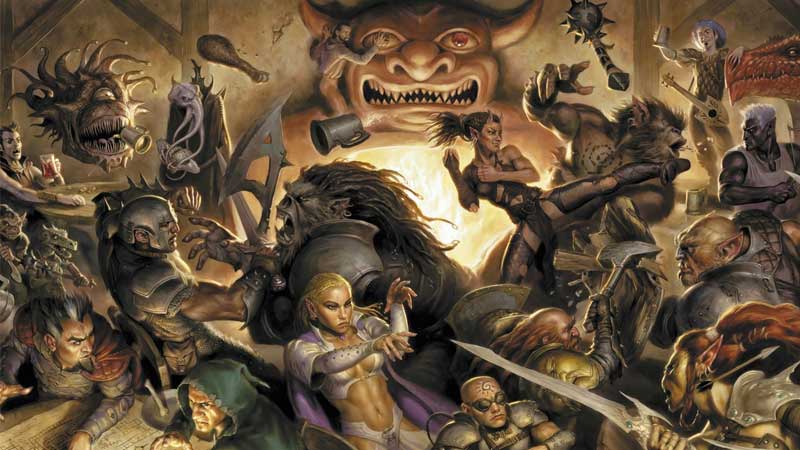 Allegations of racism within fantasy fiction, including The Lord of the Rings and Dungeons & Dragons, have long-plagued the genre’s diverse and enthusiastic fandom. For decades, many have argued that imaginary races, like orcs, are built on racist stereotypes, ideas and physical features. Just this year, a viral tweet brought the debate back to the fore, with some criticizing the depiction of orcs as beings reflect real-world racist beliefs.

Hey so if you’re stumbling into the D&D orc discourse and are one of the handful of people here with an open-mind and a genuine desire to understand what’s going on, welcome! This thread is gonna be for you; a master list of resources that explain the problem if you’re willing.

Two months later, Wizards of the Coast, Dungeons & Dragons‘ publisher, announced an update to the game to address this very problem, acknowledging racism in the game and pledging to changes that will begin to repair these issues.

On June 17th, Wizards of the Coast published “Diversity and Dungeons & Dragons,” a blog post committing to updating the game to making “D&D as welcoming and inclusive as possible.” These updates include character descriptions that include other types of people than northern Europeans and characters “who represent an array of ethnicities, gender identities, sexual orientations, and beliefs.”

One of the explicit design goals of 5th edition D&D is to depict humanity in all its beautiful diversity by depicting characters who represent an array of ethnicities, gender identities, sexual orientations, and beliefs. We want everyone to feel at home around the game table and to see positive reflections of themselves within our products. “Human” in D&D means everyone, not just fantasy versions of northern Europeans, and the D&D community is now more diverse than it’s ever been.

However, like many fans, they still run into the problem of orcs and drow, both of whom the game describes as inherently evil. These fictional races, they write, “have been characterized as monstrous and evil, using descriptions that are painfully reminiscent of how real-world ethnic groups have been and continue to be denigrated.” To correct the characters, the updated gamebooks Eberron: Rising from the Last War and Explorer’s Guide to Wildemount will feature new descriptions of orcs and drow that are “just as morally and culturally complex as other peoples.” They write:

Throughout the 50-year history of D&D, some of the peoples in the game–orcs and drow being two of the prime examples–have been characterized as monstrous and evil, using descriptions that are painfully reminiscent of how real-world ethnic groups have been and continue to be denigrated. That’s just not right, and it’s not something we believe in. Despite our conscious efforts to the contrary, we have allowed some of those old descriptions to reappear in the game. We recognize that to live our values, we have to do an even better job in handling these issues. If we make mistakes, our priority is to make things right.Here’s what we’re doing to improve:

We present orcs and drow in a new light in two of our most recent books, Eberron: Rising from the Last War and Explorer’s Guide to Wildemount. In those books, orcs and drow are just as morally and culturally complex as other peoples. We will continue that approach in future books, portraying all the peoples of D&D in relatable ways and making it clear that they are as free as humans to decide who they are and what they do.

Orcs aren’t the only thing getting an update, new reprintings of the D&D books Tomb of Annihilation and Curse of Strahd will no longer feature “racially insensitive” material. Curse of Strahd, according to Wizards, features the Vistani, a people whose “depiction echoes some stereotypes associated with the Romani people in the real world.” Wizards continues:

Curse of Strahd included a people known as the Vistani and featured the Vistani heroine Ezmerelda. Regrettably, their depiction echoes some stereotypes associated with the Romani people in the real world. To rectify that, we’ve not only made changes to Curse of Strahd, but in two upcoming books, we will also show–working with a Romani consultant–the Vistani in a way that doesn’t rely on reductive tropes.

Wizards of the Coast concludes its statement by looking to the future, announcing that they will work with “sensitivity reads” for future releases and “experts in various fields to help us identify our blind spots.” They also committed to “proactively seeking new, diverse talent to join our staff and our pool of freelance writers and artists.”

Wizards of the Coast has had success in the past with a more nuanced approach, such as the case with the widely-praised drow Drizzt Do’Urden. However, amid the calls for racial justice around the country, as well as long-simmering allegations of racism in their character designs, these updates aim at a total revision of the characters, which will they hope will make the game more fun for more people.