After recently being delayed for the second time this year, Cyberpunk 2077 fans finally got another glimpse into what they can expect from CD Projekt Red’s upcoming first-person RPG when it finally releases this November.

Earlier today, CDPR hosted their long-awaited Night City Wire event, kicking off the series with Episode 1 via livestream on Twitch. The first episode brought a hefty amount of newly released information on the game, including clips from the prologue, gameplay and features, as well as the announcement of two interesting collaborations for merchandise and a full-fledged anime.

One of the event’s most prominent features that were showcased is the new “braindance” mode, which fans of the Cyberpunk tabletop game may recognize. In braindance, players will have the ability to access the memories of various NPCs, reliving their experiences through their own eyes or a third-person, free-roaming camera that includes investigation elements, such as scanning items of interest to solve puzzles.

The trailer also featured new footage of an in-game zone called “The Badlands.” This environment was easily the least well-known of the seven announced, but surrounds the area outside of Night City. Resembling a desert, The Badlands will apparently feature more wide-open spaces for players to drive vehicles and will also include different types of open-world content in a more sandbox environment.

Another fan favorite from the tabletop game, Adam Smasher, a hulking cyborg, was briefly discussed and introduced during the event. As a member of the Malestrom faction, Smasher and his fellow members are particularly keen on body modifications and implants to the point of being almost unrecognizable as humans.

Studio Trigger, the Japanese animation studio behind animes such as Kill La Kill and Little Witch Academia, also announced that CDPR will be collaborating with them to release an upcoming anime series revolved around the Cyberpunk universe. The series, called Cyberpunk: Edgerunners, will release with 10 episodes sometime in 2022 via Netflix. Over on Reddit’s r/Anime sub, a post, titled “Cyberpunk 2077 anime announced!,” quickly racked up nearly 10,000 upvotes and 700 comments from excited fans.

TRIGGER new project
TRIGGER’s most experienced talents will be working with CD PROJEKT RED to bring you CYBERPUNK EDGERUNNERS!
Hiroyuki Imaishi will be directing the animation project with Yoh Yoshinari and Yuto Kaneko in charge of character design.https://t.co/0I8odcW7Nj pic.twitter.com/gtrzuA105O

Lastly, CDPR and SMUDGEstore Taipei unveiled a new collaboration for Cyberpunk 2077 merch with their project titled, “SMG2020 CYBERPUNK.” There weren’t too many details discussed during the livestream, but a post on Instagram from co-founder JJ Lin teased a few images of the clothing lineup for those interested in checking it out.

Following the conclusion of the event, users began discussing the newly revealed info on social media. While watching the video, a fan of Twitch streamer CohhCarnage noticed that one of the in-game characters looked similar to him, and he later confirmed his inclusion in the game on Twitter.

Huge thanks for the opportunity from CDPROJEKTRED. It was an absolute blast bringing this character to life. I can’t wait for you guys to meet him! THANK YOU! pic.twitter.com/WE5SFmrpYz

Hopefully we get to kill off @CohhCarnage’s character in Cyberpunk pic.twitter.com/5xiPvdfpOD

CDPR confirmed that there would be another episode of Night City Wire coming up in the near future with even more additional content and gameplay to show off. With two delays pushing back Cyberpunk 2077 from April this year to November, let’s just hope they manage to iron out the bugs before release. 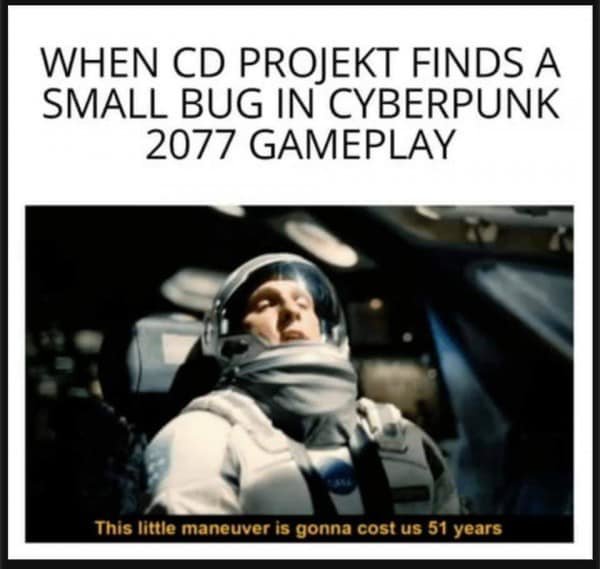 It was him all along..
Big brain
Cast Your Vote For Meme Of The Month: July 2020
hope no one has done this yet