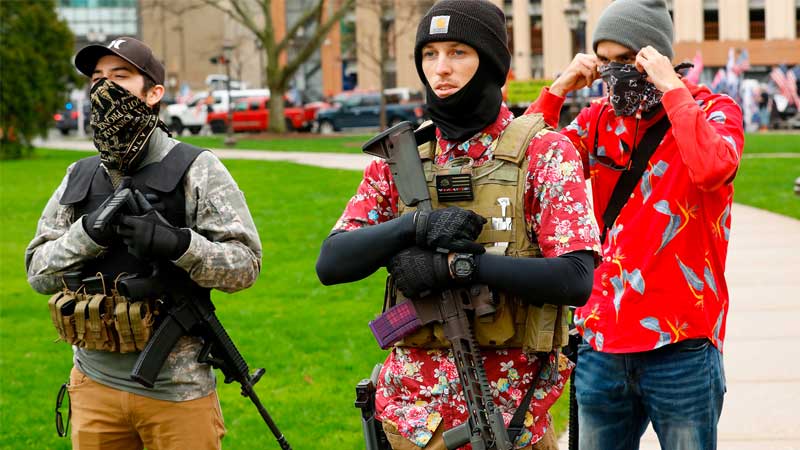 Facebook’s crackdown on violence, misinformation and hate speech continues as the platform banned hundreds of accounts connected to the Boogaloo movement, a far-right militia group. The social media giant designated the banned groups under their Dangerous Individuals and Organizations policy.

In a statement, Facebook says that they have banned more than 200 Facebook accounts and 400 additional groups for violating the company’s policy against inciting violence on the platform. Over the past year, authorities arrested and charged members of the Boogaloo movement for attempting to incite violence at protests and, in one instance, for allegedly killing a federal officer.

“Today we are designating a violent US-based anti-government network as a dangerous organization and banning it from our platform,” the announcements states. “This network uses the term boogaloo but is distinct from the broader and loosely-affiliated boogaloo movement because it actively seeks to commit violence.”

“For months, we have removed boogaloo content when there is a clear connection to violence or a credible threat to public safety, and today’s designation will mean we remove more content going forward, including Facebook Groups and Pages. This is the latest step in our commitment to ban people who proclaim a violent mission from using our platform.”

The announcement continues to state that the ban includes “praising, supporting or representing” the Boogaloo movement. These groups, according to Facebook, promote “violence against civilians, law enforcement and government officials and institutions.”

The Boogaloo movement, a far-right libertarian militia, grew significantly over the last year, appearing at protests against coronavirus lockdowns and the Black Lives Matter movement.

Police have arrested numerous members of the group over the last few months for inciting and committing violence at protests. Last month, police arrested Steven Carrillo, a self-identifying member of the movement, for the alleged killing of a federal officer at a demonstration in Oakland, California. Last month, authorities arrested three Boogaloo members for attempting to incite violence at protests, according to Mashable.

Another Child Interrupts A BBC Interview
Dolphins Are Nature's Jerks
Sir Ian Holm, Actor Known For Roles As Bilbo Baggins And Ash, Passes Away At 88
The Trailer For Ghostbusters: Afterlife Hits The Internet