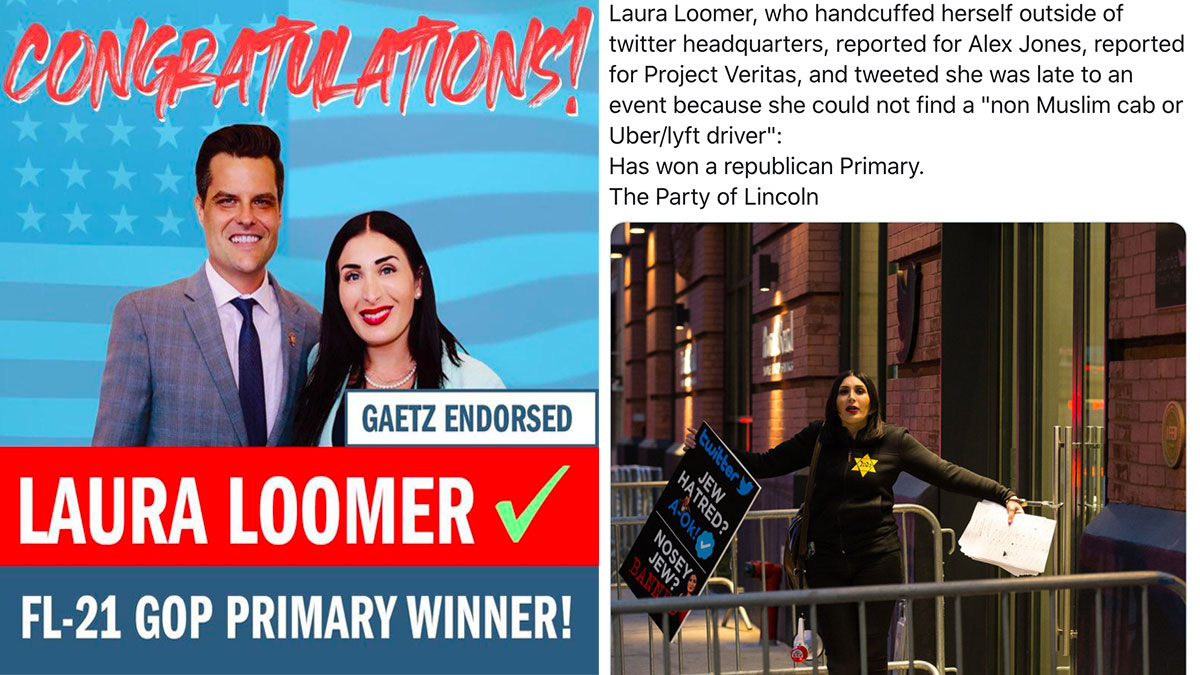 It’s been a whirlwind few years for Laura Loomer. The far-right activist chained herself to Twitter, while Lyft and Uber banned her from their services, as did Periscope, TeeSpring, Medium, Instagram and more, for violating hate speech policies. One place she’s not banned, though, is Florida’s 21st district, where she won a Republican congressional primary last night.

Loomer, who to according to Gizmodo, called “Muslims’ savages,’ has said Muslims shouldn’t be allowed to hold office, and previously called Islam a ‘cancer,'” has been banned from platforms around the internet. In the last few years, the self-described proud Islamophobe lost the right to use PayPal, Venmo, GoFundMe, Twitter, Facebook and more.

After securing the primary win last night, numerous members of the Republican party, including the President Donald Trump congratulated Loomer. This shouldn’t come as too much of a surprise: The district Loomer could represent is home to the President Trump’s Florida resort Mar-A-Lago.

Great going Laura. You have a great chance against a Pelosi puppet! https://t.co/pKZp35dUYr

Other right-wing leaders joined the president in celebrating her win, including Matt Gaetz, whose congratulations inspired several memes.

However, it’s unlikely that Loomer will win the seat in the deeply Democratic district. Loomer won a six-way contest, after raising “more than $1 million thanks to support from conspiracy theorist Alex Jones, pardoned Trump ally Roger Stone and Florida Rep. Matt Gaetz,” according to CNN.

Endorsements from the president and support from Alex Jones and Roger Stone aren’t impressing people online. As her name trended online, many reminded her followers of the bigotted statements she’s made in the past.

Remarkable to see a president endorse a candidate who said Muslims shouldn’t have be allowed to hold public office and called Islam “a cancer on humanity.”

In a normal administration this would be a huge story but it will barely get mentioned. https://t.co/9AOaePb08M

Laura Loomer is fucking banned from Uber, Lyft, GoFundMe, and PayPal. Fuck everyone who voted for her.

QAnon MAGA Lunatic Laura Loomer is banned on many platforms such as Twitter, Uber, PayPal, GoFundMe. She handcuffed herself to Twitter HQ demanding she be unbanned. She’s an evil Sandy Hook Massacre denier.

And this just won the GOP Primary in FL’s 21st District. Disgusting.

This normalization of hate is dangerous. Laura Loomer–an anti-Muslim and anti-immigrant conspiracy theorist who has been kicked off of almost every major social media platform for promoting her bigotry– celebrated a primary win with other bigots. https://t.co/KBgnptRJQ5

Laura Loomer, who handcuffed herself outside of twitter headquarters, reported for Alex Jones, reported for Project Veritas, and tweeted she was late to an event because she could not find a “non Muslim cab or Uber/lyft driver”:
Has won a republican Primary.
The Party of Lincoln https://t.co/G33h6wOJht pic.twitter.com/IDWLY9ZUau

Gordon’s forehead is HOT!!!
We can do it boys
NVIDIA Reveals Stunning New GeForce 3000 Series GPUs During A Livestream Event Hosted In The CEO’s K...
An Exploitable For Remembering The Saddest Moments Of Your Favorite Things