Summer 2020 Fireworks Conspiracy Theories refers to a series of unsubstantiated explanations for a series on unexplained fireworks displays in major cities throughout the United States. The surge in usage led some to believe that the use of fireworks was government-sanctioned psychological operations, also known as “psyops,” designed to deprive the sleep of demonstrators during the George Floyd Protests. Others contend that the increased use of fireworks is due to the cancelations Fourth of July fireworks displays, causing the price of fireworks to drop significantly.

Over the next few weeks, others continued to share videos of late-night fireworks throughout New York City. On May 7th, Twitter user @navahmadi tweeted a video with the caption “Fireworks from a condo building in downtown Brooklyn… at 12:45am…”

Fireworks from a condo building in downtown Brooklyn… at 12:45am… pic.twitter.com/NqH5cN4HUo

On May 21st, Gothamist published a report on the reports of fireworks throughout New York City. They wrote:

In the weeks preceding and following the 4th of July, New Yorkers generally grow accustomed to the bangs and booms erupting from illegal rooftop fireworks. But well before the end of May 2020, some parts of the city are being subjected to large scale fireworks displays late into the evening, and residents are increasingly fed up.

Over the next few weeks, residents of New York City continued to complain about the fireworks. On June 9th, for example, Twitter user @neriwun tweeted, “if ur in LA popping fireworks shut the fuck up bro.” The tweet received more than 24,000 likes and 8,600 retweets in less than one month (shown below, left).

Social media posts like this continued over the week, reporting fireworks in multiple cities throughout the U.S. Twitter user @SOULJAKRY tweeted, “who df is givin u niggas fireworks EVERY NIGHT.” The tweet received more than 157,000 likes and 39,000 retweets in less than one month (shown below, right).

Around this time, some began posting conspiracy theories that allege that the police are responsible for the fireworks. For example, on June 14th, Twitter user @audriemking tweeted, “Conspiracy theory: What if cops are the ones setting off these massive firework displays every night? Seeing how long it will take for the community to ask for their help & then they’ll swoop in and save the day” (shown below, left). On June 20th, Twitter @BeezySaysBLM answered a question about the fireworks, “Due to the riots looting and thanks to the government and antifa they left truck loads of fireworks behind that’s why so many people have their hands on them. And elites are dropping them off on every corner to keep the mayhem going. Be safe y’all martial law coming” (shown below, right). 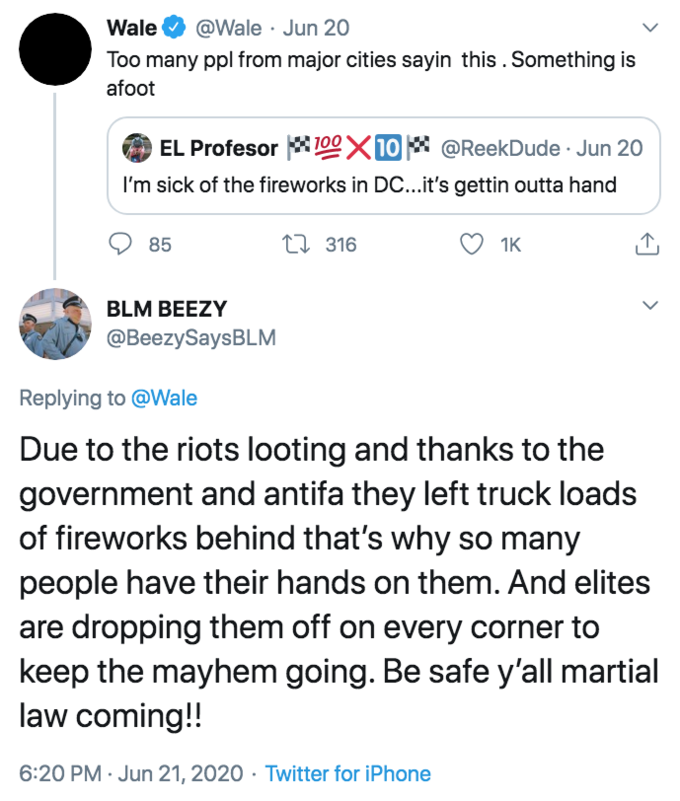 On June 15th, Gothamist reported that firework complaints increased by 230 times in June (shown below). 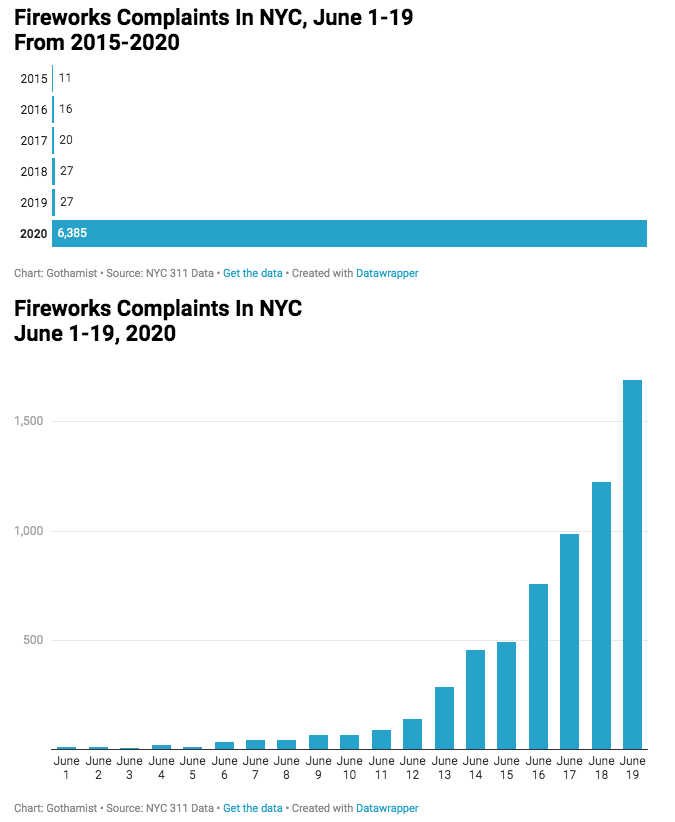 On June 18th, Twitter user @davehill77 tweeted a thread about the fireworks in which he states that the price drop in fireworks led to increased usage (shown below, left and center). On June 20th, Twitter user @SonofBaldwin tweeted, “My neighbors and I believe that this is part of a coordinated attack on Black and Brown communities by government forces; an attack meant to disorient and destabilize the #BlackLivesMatter movement.” One of the initial tweets in the thread received more than 16,000 likes and 14,000 retweets in less than two days (shown below, right). 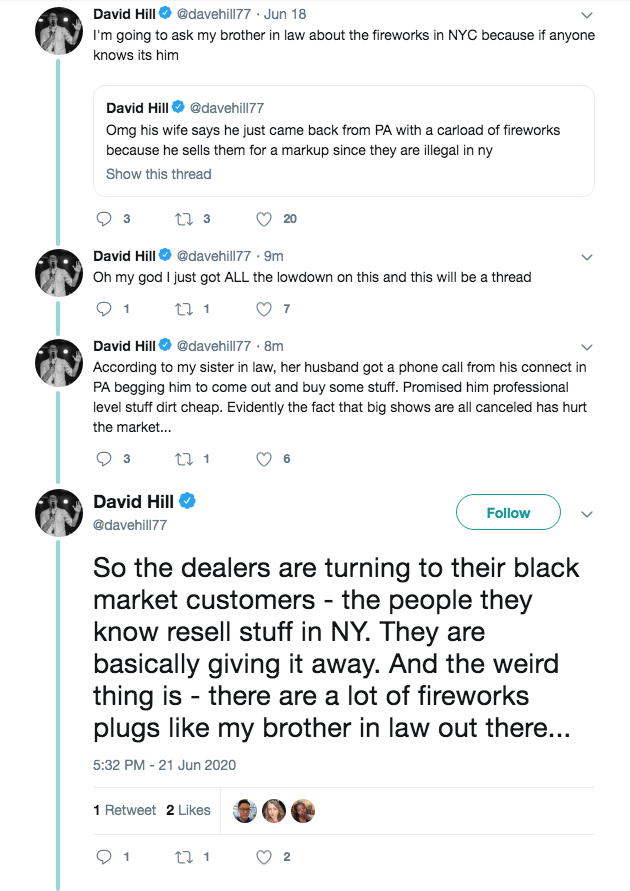 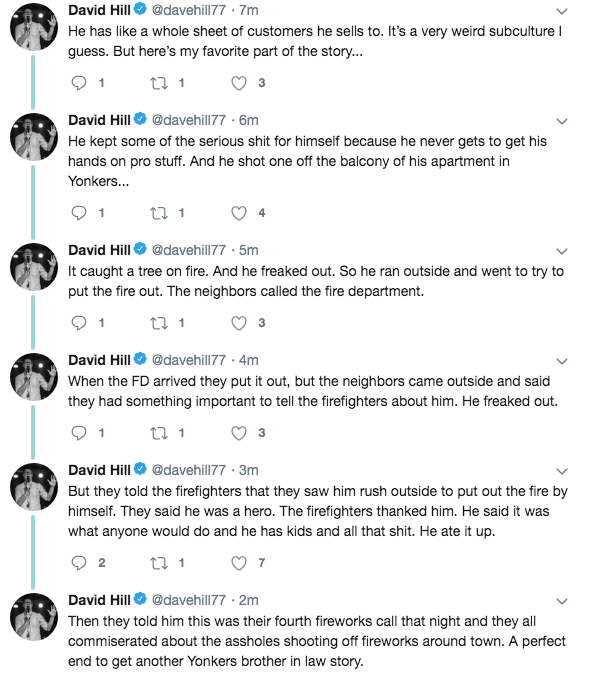 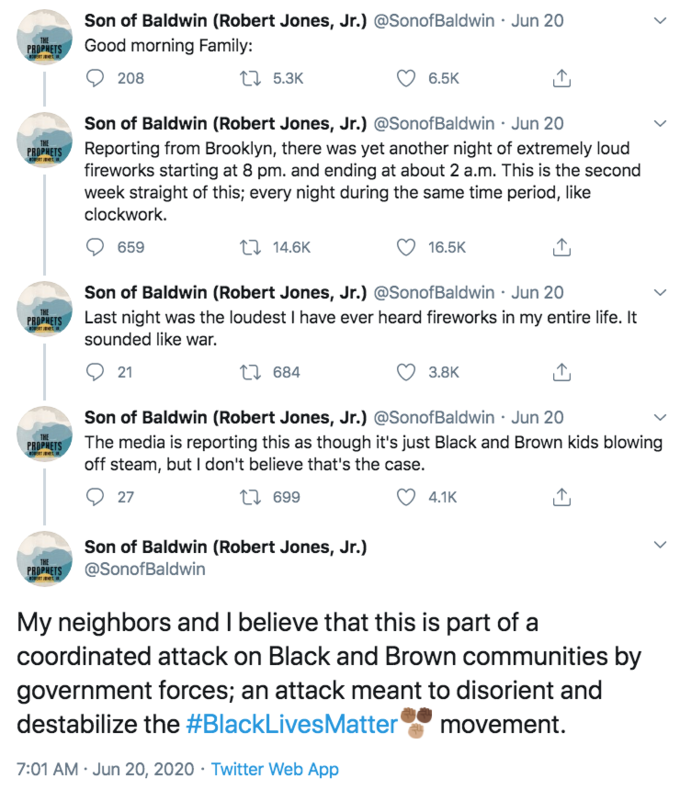 Reddit. For example on June 20th, Redditor theplantmain asked the /r/AskReddit subreddit about the fireworks. The post received more than 40,000 upvotes (89% upvoted) and 4,900 comments in less than one week. Conversation about the fireworks also appeared on /r/AskAnAmerican, /r/LosAngeles, /r/NYC, /r/AdviceAnimals and more. ‘

Perhaps more importantly, retailers have also started selling fireworks online and allowing for pickup service. In an email, Heckman confirmed to me that this is a new marketing strategy for the industry; before the pandemic, online sales were rare. (One cannot, after all, drop a bomb in the mail.) Steve Pelkey is the owner and CEO of Atlas Fireworks, a family-owned company that produces large fireworks events, including for the New England Patriots, and also operates four retail locations in New Hampshire. Atlas began offering online sales during the pandemic, and retail sales are currently up 28 percent from 2019. Pelkey estimates that online sales now account for 24 percent of Atlas’ gross retail revenue. These online sales may be helping retailers to reach new customers–perhaps even ones who live in cities in Massachusetts, the lone state that still outlaws the sale of all types of fireworks.

More Than 150 Years After The Civil War, NASCAR Bans Confederate Flags
The controversy never ends ♾
Dat dog won't bite me
Slang Has People Confused In "Based On What?" and "Go Where?" Memes