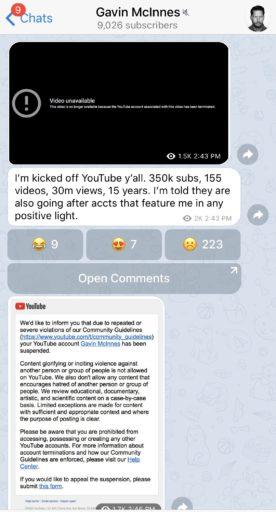 Gavin McInnes, the infamous far-right internet personality who founded the Proud Boys, a violent extremist group, has been suspended from YouTube. The platform cites McInnes’ violations of YouTube’s community guidelines, particularly the glorification of violence.

McInnes announced his suspension in a Telegram message on Monday. He posted the note from YouTube, which states the reasons for his suspension as his “repeated or severe violations of our Community Guidelines.”

In a statement to the Daily Dot, a YouTube spokesperson said:

“We have strict policies that prohibit hate speech on YouTube. We terminate channels that repeatedly or egregiously violate our policies.”

In recent months, McInnes, like several other personalities banned from mainstream platforms, moved over to Censored.TV, an alternative video streaming website that features other pundits of the far-right, such as Soph and Milo Yiannopoulos.