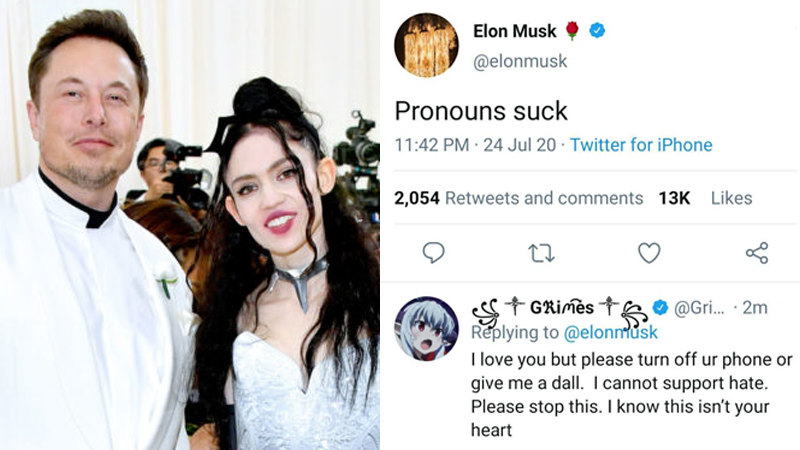 Mothers used to beg the fathers of their children to not go to war. Now they beg them to log off.

Such was the scene late Friday night when future-pop artist and X Æ A-12 mother Grimes publicly asked her partner Elon Musk to “turn off your phone and give me a ‘dall’ (sic).”

Musk, whose chaotic Twitter presence is notoriously the bane of his investors, tweeted “pronouns suck.” Many interpreted the tweet as expressing a distaste for clarifying one’s personal pronouns, a practice common among trans people, gender non-conforming people and their allies.

Grimes, no stranger to playing with names and gender, asked Musk to log off and call her, saying “I know this isn’t in your heart.” The tweet was deleted but not before it was screenshot and widely shared. At one point, Big Tech Alert tweeted that Musk had stopped following Grimes on Twitter, but that is no longer the case.

👀 elonmusk is no longer following Grimezsz

While the coupling status of Musk and Grimes remains unclear, the brief, public squabble between the two nonetheless lead to schadenfreude for Twitter users who find the pair insufferable.

elon musk and grimes are a social experiment conducted by harvard pic.twitter.com/GxuvO7slXt

grimes calling out elon musk for saying he hates pronouns while naming her baby after a CIA military surveillance plane that was used in vietnam is peak lib shit pic.twitter.com/UX20yGoUnK

Grimes, after having had an entire fucking sentient human baby with Elon Musk: woww my anata Elon-san i know this isn’t the real u~~ 😔
Complete Strangers Who’ve Seen pic.twitter.com/0lDIlUWcWo

elon musk when grimes replied to the pronouns tweet pic.twitter.com/vIDyvXnC0e

Excellent Employment Of Rule 63
Clams Casino's "I'm God" Has Become An Unofficial Song Of Mourning Online
We Turned Know Your Meme Into A Pickle!
I used to like u