Donald Trump’s June 2020 Tulsa Rally is scheduled for June 20th, 2020, at the BOK Center in Tulsa, Oklahoma. The event will be the first campaign rally for President Donald Trump’s in re-election campaign for the 2020 U.S. Presidential election. Critics derided the announcement of the rally, citing concerns over the spread of the coronavirus as well as allegations of racism over having the rally in Tulsa, the site of the 1921 Tulsa race massacre, so close to Juneteenth, which commemorates the emancipation of slaves throughout all of the United States.

On June 10th, 2020, President Trump announced his plans to hold the first of several campaign rallies for his 2020 re-election campaign in Tulsa, Oklahoma, on June 19th, 2020 (shown below).

President Trump announced that he plans to hold his first campaign rally since the coronavirus pandemic in Tulsa, Oklahoma on June 19 and named Florida, Texas and Arizona as places for upcoming rallies pic.twitter.com/rBJ9Te07bv

Following the announcement, many criticized the president for holding a rally in Tulsa on June 19th, Juneteenth. Democratic Representative Karen Bass told NBC that holding a rally there on June 19th was “disrespectful to the lives and community that was lost during the Tulsa race riot.” She continued:

This was a massacre of innocent Black inhabitants by White supremacists in a span of 24 hours. This was the worst act of racial violence to date, and yet this is the place that the president, who has pursued nothing but a hostile and oppressive agenda for black people since his inauguration, has chosen to celebrate.

On June 11th, Twitter user @RedTRaccoon tweeted a video about the history of the Tulsa Race Massacre. They wrote, “For those that don’t understand the significance of Trump going to Tulsa on Juneteenth, I want you to watch this video. This isn’t a coincidence, it’s by design.” The tweet received more than 1,7 million views, 13,000 likes and 11,000 retweets in less than two weeks (shown below).

For those that don’t understand the significance of Trump going to Tulsa on Juneteenth, I want you to watch this video.

After days of criticism, Trump moved the rally. He tweeted, “We had previously scheduled our #MAGA Rally in Tulsa, Oklahoma, for June 19th – a big deal. Unfortunately, however, this would fall on the Juneteenth Holiday. Many of my African American friends and supporters have reached out to suggest that we consider changing the date out of respect for this Holiday and in observance of this important occasion and all that it represents. I have therefore decided to move our rally to Saturday, June 20th, in order to honor their requests.” The initial tweet received more than 130,000 likes and 30,000 retweets in less than two weeks (shown below). 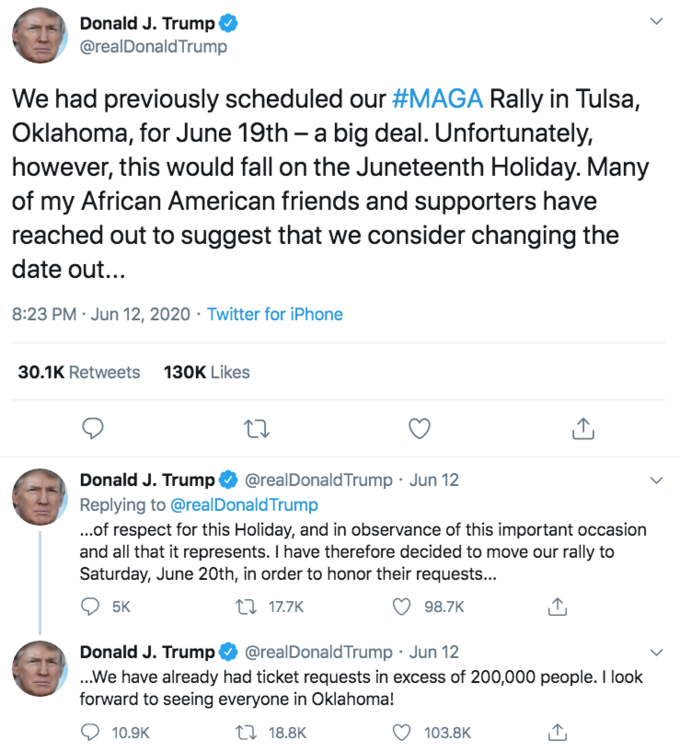 Health officials expressed concerns over the rally, scheduled to take place during the coronavirus global pandemic. The site of the rally, the BOK Center, holds 19,000 seats. On June 12th, many noted a liability waiver that registrants were required to acknowledge before completing their registration. This waiver absolves the Trump campaign of responsibility if an attendee contracts the coronavirus at the rally. It reads:

By attending the Rally, you and any guests voluntarily assume all risks related to exposure to COVID-19 and agree not to hold Donald J. Trump for President, Inc.; BOK Center; ASM Global; or any of their affiliates, directors, officers, employees, agents, contractors, or volunteers liable for any illness or injury

On June 15th, Dr. Bruce Dart, the executive director of the Tulsa County Health Department, expressed great concern over the rally. He said, “Regardless who is hosting this rally, we would recommend you not attend large events. If you want to stay safe, don’t go.”

On June 17th, Dr. Anthony Fauci, the head of the National Institute of Allergy and Infectious Diseases, said he would not attend the event. He said, “I’m in a high-risk category. Personally, I would not. Of course not.” He continued, “Outside is better than inside, no crowd is better than crowd.”

On June 19th, the Washington Post reported that the “Oklahoma Supreme Court rejected an appeal of a lawsuit attempting to block President Trump from holding an indoor campaign rally Saturday in Tulsa that many feared could worsen the spread of coronavirus.”

On June 19th, 2020, President Trump warned against protests at his rally. He tweeted, “Any protesters, anarchists, agitators, looters or lowlifes who are going to Oklahoma please understand, you will not be treated like you have been in New York, Seattle, or Minneapolis. It will be a much different scene!” The tweet received more than 215,000 likes and 72,000 retweets in less than

Vote Trump 2020 Family Band Video is a viral video featuring a group of adults and children singing a song about voting for President Donald Trump in the 2020 United States Presidential Election.