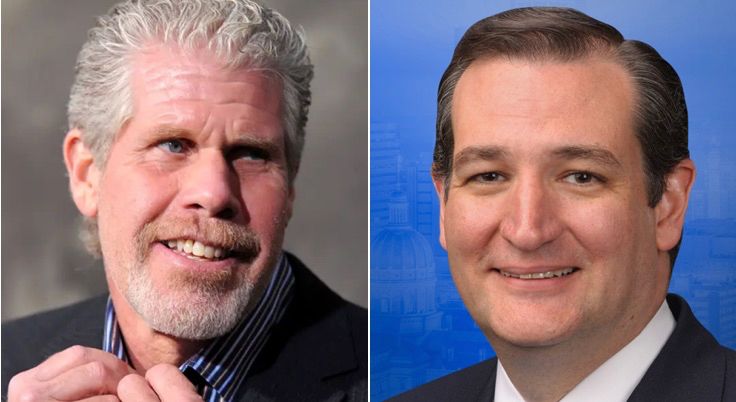 In the latest news from 2020’s onslaught of surreality, Hellboy actor Ron Perlman has challenged Texas Senator Ted Cruz to a $50,000 wrestling match for charity. If you had that on your 2020 bingo card, more power to you.

This fight, which almost definitely won’t happen, was borne from a feud Perlman was having with Florida congressman Matt Gaetz on Twitter. Perlman sniped at Gaetz for criticizing a recent decision by U.S. Soccer to no longer require players to stand for the national anthem.

The US Soccer team called and you guessed it… said they couldn’t give any less of a fuck about what you two dipshits think. realDonaldTrump mattgaetz

Gaetz and Perlman began trading insults at each other, with Gaetz saying he was proud “Hollywood” was against him, and Perlman saying Gaetz was an asshole.

Yessir, so true! So rewarding playing assholes on tv. Tell me sir, how is it actually being one? https://t.co/8Yk4lXvyAI

And while we’re at it fuckboi, what is this shit about playing your crowd with dog whistles like “Hollywood“, making them think culture is the thing that’s keeping them down? When it’s really you and your greed.

At one point in their feud, Perlman told Gaetz he was lucky Ohio representative Jim Jordan was in congress, or Gaetz would be the “ugliest politician walking.”

PS: You’re lucky for this guy Matt. If it weren’t for him you’d be the ugliest politician walking. @mattgaetz pic.twitter.com/uUgUDKHgZA

This was simply a bridge too far for Senator Ted Cruz, who had the brilliant idea to say that Jim Jordan, 56, could beat Perlman in a wrestling match.

Listen Hellboy. You talk good game when you’ve got Hollywood makeup & stuntmen. But I’ll bet $10k–to the nonpolitical charity of your choice–that you couldn’t last 5 min in the wrestling ring w/ @Jim_Jordan w/o getting pinned. You up for it? Or does your publicist say too risky? https://t.co/eRerYVe5kj

Perlman responded in a series of tweets by pointing out the numerous times Donald Trump insulted Cruz and his family, nodding towards accusations against Jordan covered up a sexual abuse scandal while coaching wrestling at Ohio State University, calling Cruz a “muthafucka,” and challenging Cruz himself to a wrestling match.

Wait, is this THEE Ted Cruz? Holy shit man! Is this the same guy let little Donnie call his wife A dog and his father an assassin and now kisses his ass? Yo, can I get your autograph man? https://t.co/6QDwCaEkpv

I tell you what teddy boy, since mentioning jim jordan and wrestling is… problematic, why don’t we say fuck him and just make it you & me. I’ll give 50k to Black Lives Matter and you can keep all the tax payer money you were thinking of spending. https://t.co/6QDwCaEkpv

Teddy, Teddy, what kind of a muthafucka offers to have another guy, probably asleep at the time, kick another guy’s ass? https://t.co/v7EFmP1Mqe

So here we are. Cruz has yet to respond to Perlman’s challenge, and likely won’t, as he’s since gone back to trying to dunk on protestors and New Yorkers. Yet again 2020 has proven it is the epitome of The Darkest Timeline.