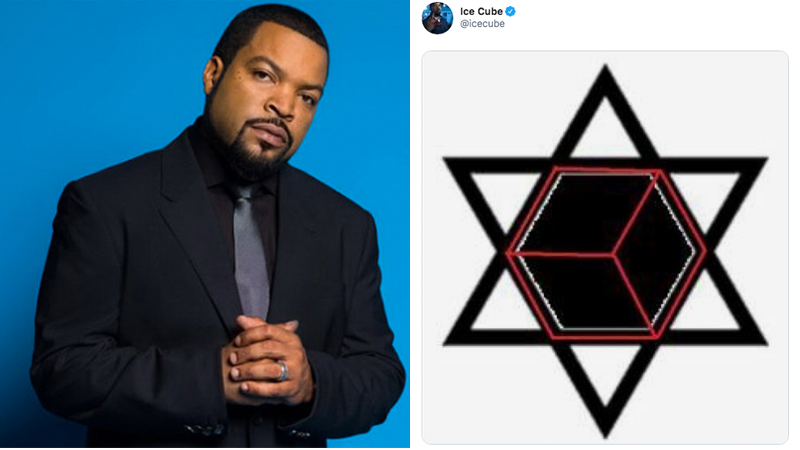 Today was a good day, or so rapper Ice Cube would have you believe. One day after posting a QAnon meme, the rapper-turned-actor continued to share images from a bizarre ideology that has yet to cohere.

Beginning around 7:30 this morning, Ice Cube tweeted more than 55 times, tackling such topics as the prevalence of black cubes throughout history and the world, and how the modern media and the media of yesteryear is connected.

Shortly before noon, Cube went on a storm, posting images of black cubes, the Egyptian god Set, and how neatly one of those cubes can fit into a Star of David. It’s unclear what Ice Cube means by any of this. Still, it does seem connected to a few religious groups, like the Black Hebrew Israelites, which has been accused of anti-Semitism by the Anti-Defamation League, and the conspiracy theory QAnon.

This wouldn’t be the first time in the past few days that Cube has found himself sharing Q-related and anti-Semitic content. Earlier this week, he tweeted an image of an antisemitic mural of a group of Jewish caricatures playing Monopoly and counting money on the back of black people. The post also sports the watermark “anonews.”

FUCK THE NEW NORMAL UNTIL THEY FIX THE OLD NORMAL! pic.twitter.com/wNN3uwOb4K

Of the mural, Michael Segalov writes for The Guardian:

First, make sure to actually look at the mural. Don’t take a fleeting glance as you prepare to tweet your outrage, but pause for a moment and take it all in. Sitting around a table is a group of rotund men: one has a full beard, and is counting money. That, in and of itself, is an antisemitic symbol.It’s not just the big, hooked noses and evil expressions that make this iconography offensive and troubling, these depictions mirror antisemitic propaganda used by Hitler and the Nazis to whip up hatred that led to the massacre of millions of Jews. This extends to the table these figures are sat at, resting on human bodies, as the Nazis also depicted.

Many online are none-too please with Ice Cube, accusing him of anti-Semitism, sharing “Russian propaganda” and outing himself as a believer of Q.

The image on the right in this Ice Cube tweet is brand marked “BM” for Black Matters, a fake Russian media property and FB page that focused on integrating itself into real Black media networks. It spread a range of misleading content designed to sow discord…. pic.twitter.com/9Q2e8vyx3j

Ice Cube went from cool to exposing himself as an Anti-Semite in less than a day smh pic.twitter.com/ca4laGnJX2

Conspiracy theories allow their proponents to flatter themselves into thinking base prejudices are but marks of intellectual sophistication. Even so, “cubes are symbols of Jewish control” reaches a new frontier of stupid when offered by a guy best known as … Ice Cube. https://t.co/icds6YCiLu

Ice Cube becoming a q guy is literally all we need to complete the 2020 insane bingo https://t.co/sfBYRe8aXX

It’s unclear what Ice Cube’s true intentions were with his mid-afternoon tweet storm. He has yet to comment on the situation or any of his controversial posts from the last few days, but his last tweet in the series might clue us into his thoughts on the situation:

Don't Try To Make Sense Of 38.4 Because There Ain't No Sense In 38.4
Coins
Long Live Greg Peppers, The Quarantine Everyman
Communism stonks