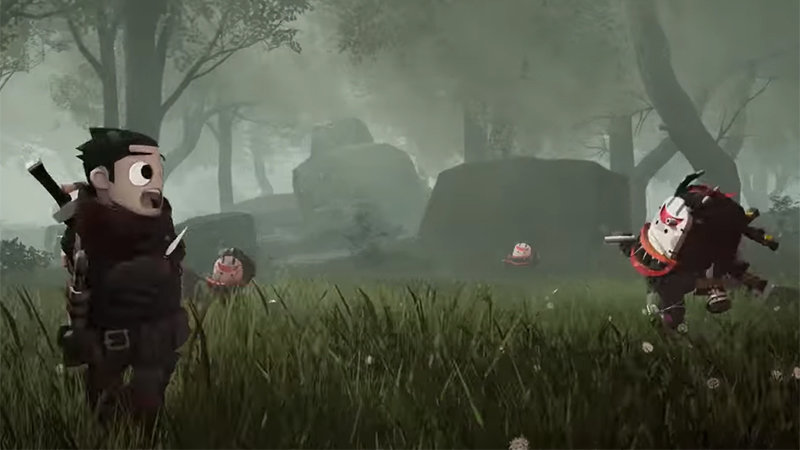 During Sony’s event last week where the new PlayStation 5 console was revealed alongside dozens of new games, one interesting indie title from a company based in Seoul caught the attention of many online for its unique art style and concept. Over the weekend, however, Little Devil Inside drew the ire of some online after a user claimed a particular clip showing off one of the game’s enemies portrayed “racist stereotypes.”

Despite positive reception for the game initially, several took to social media in the past few days and pointed out what they felt were racist or stereotypical caricatures of black, indigenous tribal people wearing loincloths with dreads, big red lips and blowguns that some said looked like joints.

On Friday, Twitter user and Twitch streamer LordBalvin was one of the first to comment on the design, and said, “I was so excited for Little Devil Inside. Then I noticed these enemy types. bruh.” He continued the thread and added, “It’s not up to me to decide the intentions here, it could just be a tone deaf character design. but this shows you need some insight from indigenous and/or black people in the room.”

So– this game is developed by an indie team in Seoul called Neostream, it’s not a Sony game.

It’s not up to me to decide the intentions here, it could just be a tone deaf character design. but this shows you need some insight from indigenous and/or black people in the room.

PikaChulita, another user who commented on Twitter, further explained the reasoning behind some of their issues and stated, “Well the problem is the dreads, the lips, & basically just this being a rendition of a black/African tribal character. Its a racist caricature lmao. There’s a way of depicting indigenous tribes or tribal people without portraying a caricature. The lips, the dreads-those are stereotypes.”

Others joined in the thread and questioned these claims, such as AfroChamp who replied, “Why is this bad?” to which dabbingyeeter responded, “Dreads apparently mean they’re black and since they’re enemies it’s racist. Twitter is full of fragile, closeted racists.”

Dreads apparently mean they’re black and since they’re enemies it’s racist.
Twitter is full of fragile, closeted racists.
Run while you can king.

Following the backlash, the game’s developers, Neostream, addressed the criticisms and posted an apology on the Little Devil Inside Facebook page and stated, “Racist stereotypes of any kind were absolutely not intended, we were not aware of the stereotypical connotations and wish to apologize to anyone who may have been offended by the character design. In addition, no one (not just limited to team members) has ever commented or hinted on the character designs. However, these characters have not been revealed publicly elsewhere prior to the event.” 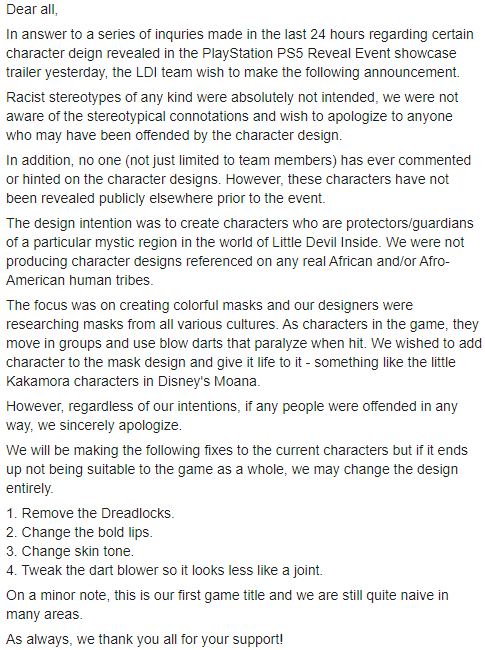 The devs said that they plan to remove the dreadlocks, change the lips and skin tone, as well as “tweak the dart blower so it looks less like a joint,” though they may completely redesign the enemies entirely to address concerns.

The post on Facebook quickly reached over 500 comments from users, with the top coming from Pietro Spina who said, “If you feel the need to apologize, it’s ok. Going the extra mile to change the game feels unnecessary. Everyone deserves respect, and that also includes you.” Fabian Roldan also commented, “I just can´t believe someone got offended, if you guys change it, you are going to contribute and perpetuate this stupidity of entitlement and political agendas, don´t change it and don´t apologize. The game looks awesome, keep faithful to your vision, and keep the good work.”

The debate also reached Reddit on Sunday after Redditor GachiRainD posted an article to the r/KotakuInAction sub under the title “Little Devil Inside Devs Apologize For ‘Racist’ Enemy Design And Will Change Them because some twitter snowflakes started whining.” Redditor SufferableKant replied with the top comment, which read, “As someone who lives in Africa, boo hoo hoo. I swear, these people would probably starve to death if they didn’t find something utterly inane to complain about three times a day. And it’s a right shame the studio is kowtowing to them. The game actually looked mildly interesting. Alas.”

He. Is. Coming.
Diddy Hosted A Star-studded Dance-a-thon On Instagram Live For Charity
You've Gotta Believe Me: The Party Was Nice, The Party Was Pumpin'
classy indeed