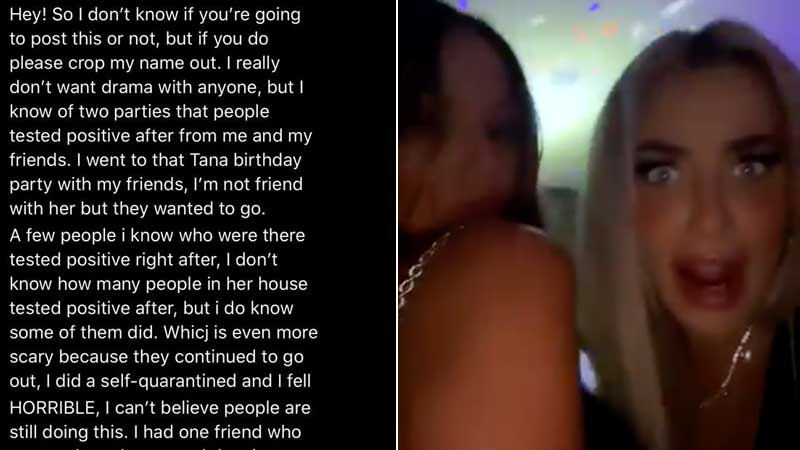 As U.S. residents continued their fifth month of quarantine, with coronavirus deaths reaching 157,000 in the United States, influencers in the wealthy, Los Angeles suburb of Calabasas partied in the U.S.A. Reports of large, mask-less gatherings at Hype Houses, featuring the likes of Tana Mongeau and James Charles, spread across social media this past week, with some online confirming COVID-positive partygoers.

Among the most documented gatherings, a birthday celebration for YouTuber Laaraay, included appearances by influencers Nikita Dragun, who threw the party, as well as TikTok’s most popular sisters Charli and Dixie D’Amelio.

As the backlash to the videos set in, anonymous reports of partygoers who tested positive for the coronavirus made a sadly expected appearance. YouTuber Def Noodles tweeted an account that confirmed some attendees went to the party knowing they had the virus.

James Charles, Charli D’Amelio, Larray and Avani break self-isolation to go to dinner. The 4 attended Larray’s birthday party at Hype House July 21-22. Paparazzi got them at BOA last night 10 days after party. California recommends 14 days. More in thread. What are your thought? pic.twitter.com/YO2eknrs84

On July 26th, Def Noodles tweeted a video of Tana Mongeau at a hype house party saying that she doesn’t “fucking care.” The video received more than 1.3 million views in less than one week. The tweet also reports that Mongeau went to two other parties at “Jake Paul’s house and Hype House.”

Tana Mongeau says “Listen, we don’t f**king care” in video where she and Erika Costell appear to be in house party. Tana went to 2 other COVID parties at Jake Paul’s house and Hype House. Notably, James Charles apologized yesterday for Hype House party. What are your thoughts? pic.twitter.com/mV4FX6H5Xg

Some influencers, such as Tyler Oakley, criticized those breaking coronavirus precautions to party, calling out some of the most popular internet personalities by name.

Tana Mongeau apologized for her breaking safety precautions, calling her behavior “irresponsible” in an Instagram story. She wrote:

Partying/going to any social gathering during a global pandemic was such a careless and irresponsible action on my behalf. I fully hold myself accountable for this and will be staying inside. Actions like that don’t deserve a platform and I want to fully apologize and be better than this. I’m sorry.

Earlier in July, the mayor of Calabasas criticized parties thrown by internet celebrities, like Jake Paul.

NEW: The mayor of Calabasas & neighbors tell me they’re outraged after they say YouTube celebrity jakepaul threw a massive party at his mansion on Saturday. They call it irresponsible, selfish, & say it’s businesses & workers who pay the price for this w/ lockdowns. 10pm FOXLA pic.twitter.com/COiVleuDH2

After one of Paul’s representatives spoke with May Alicia Weintraub, Paul told Insider that “everything is cool” and that he was unsure if he would stop hosting parties.

“I don’t know what to think of it, to be honest,” Paul said. “No one has answers, our leadership is failing us, and everyone kind of just doesn’t know what to do. But I personally am not the type of person who’s gonna sit around and not live my life.”