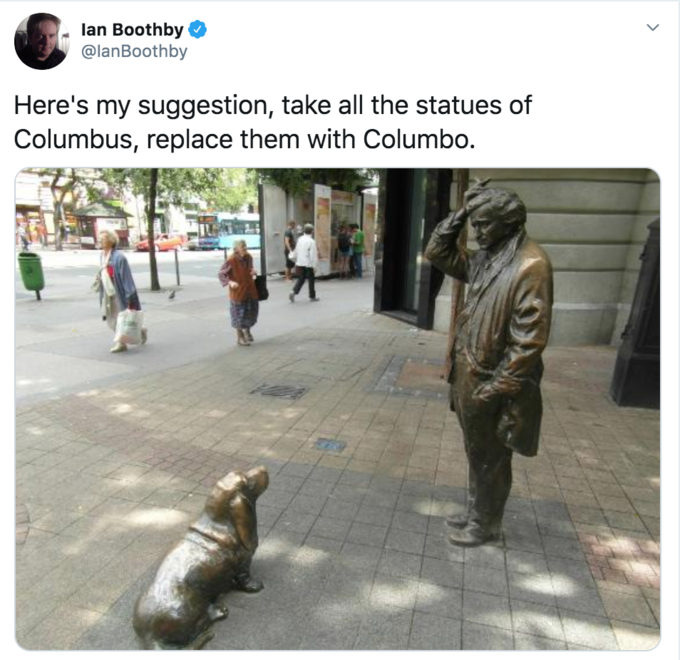 In light of all the statue toppling and removal, many residents in places named after imperialists, colonialists and slave owners have wondered what to do about their questionably-named municipalities? It’s a lot more complicated to rename a town than it is to remove a statue, after all. But somethings are worth fighting for.

One resident in Columbus, Ohio, is willing to go the distance.

Last week, Columbus Mayor Andrew J. Ginther announced that the local government would remove a statue of Christopher Columbus from City Hall, Tyler Woodbridge launched Change.org to rename the city “Flavortown” in honor of the Food Network’s funkalicious host Guy Fieri Why? Because Guy is one of Columbus’ (and America’s) favorite sons, and to honor Columbus’ storied food tradition.

“Why not rename the city Flavortown? The new name is twofold. For one, it honors Central Ohio’s proud heritage as a culinary crossroads and one of the nation’s largest test markets for the food industry,” writes Woodbridge. “Secondly, cheflebrity Guy Fieri was born in Columbus, so naming the city in honor of him (he’s such a good dude, really) would be superior to its current nomenclature.”

“Columbus is an amazing city, but one whose name is tarnished by the very name itself. Its namesake, Christopher Columbus, is in The Bad Place because of all his raping, slave trading, and genocide. That’s not exactly a proud legacy.”

Woodbridge isn’t the only one willing to honor Mr. Fieri; more than 80,000 people have signed the petition. Many have also pointed out the good Fieri has provided the world. One commenter writes:

All joking aside, Guy Fieri has raised 20 million dollars for food service workers impacted by the pandemic. This act ALONE makes him far more worthy of a town named in his honor than Christopher Columbus. History has PROVEN to us that Christopher Columbus’ “contributions” to history were, at best, opportunistic capitalizations on a misunderstanding of the shape of the earth that ONLY benefited a select group of people.I recognize that “Flavor Town” is an absurdist argument for a new name change. Naming the city after a heroic Native American such as Tecumseh would be FAR more reasonable. But if we have to choose between “Flavor Town” and Columbus, I know where I stand.

In an update yesterday, Woodbridge updated supporters that he would be bringing the petition to Columbus City Hall on June 30th. He also invited others to join in his march, emphasizing the presence “black and indigenous persons.”

“Feel free to join me for the walk. I invite any black and indigenous persons to come and have their voice centered, as they are the ones most effected by Cristobal Colon and his cruel legacy. ”

“Flavortown, Ohio” really does put the shama lama in ding dong. If you agree, you can check out the full petition here.