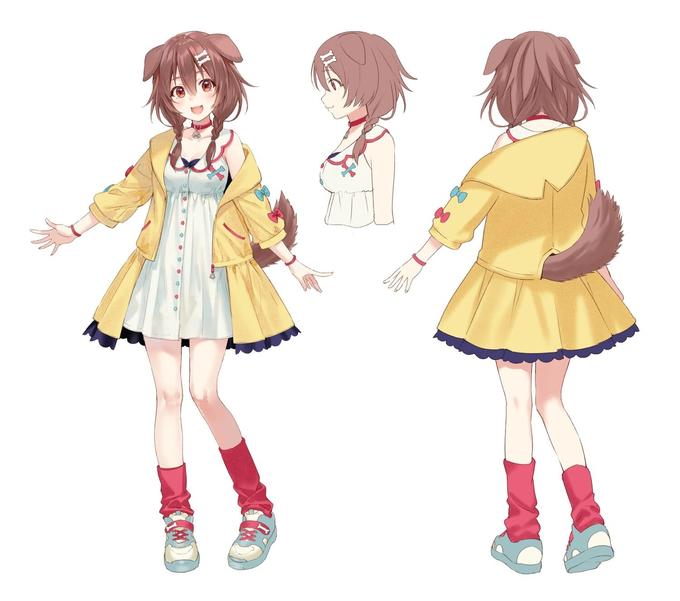 Inugami Korone (Japanese: 戌神ころね) is a Virtual YouTuber affiliated with HoloLive. She is known for streaming variety gaming and other content on YouTube. Her character, modeled after an anime styled Cavalier King Charles Spaniel, was designed by Nenka “Ruinon” Fukahire.

On March 22nd, 2019, Korone was announced by fellow HoloLive streamer Shirakami Fubuki via YouTube stream, along with several other debuting virtual YouTubers. The official HoloLive Twitter announced her on March 25th, 2019, and her first debut YouTube stream was on April 13th, 2019, which had over 217,000 views. As of June 2020, her channel has over 435,000 subscribers, and her Twitter profile has 261,000 followers.

On January 28th, 2020, Japanese gaming magazine Dengeki online reported that Korone, along with several other HoloLive virtual YouTubers, would appear in upcoming Hyperdimension Neptunia title Neptunia Virtual Stars, or VVVTune. Korone has been featured on many HoloLive streams since her debut and is popular with western fans for her frequent attempts to speak English, often with the help of Google Translate. She has profiles on Bilibili, Pixiv Encyclopedia, and Moegirl Encyclopedia. Her fandom is often referred to as “Koronesuki” (Japanese: ころねすきー), a portmanteau of Korone’s name and “suki” (to like or love).

Hotate Tetaho refers to a segment of HoloLive streamer Kiryu Coco’s “AsaCoco” parody news segment, in which Korone reads the word for scallops (Japanese: ホタテ, Hotate) while showing a picture of a shell, followed by the word in reverse with the image inverted (captioned テタホ, Tetaho). The scene is captioned “overwhelmingly pure” (Japanese: 圧倒的, 清楚, attōteki, seiso) and features Korone in a large kadomatsu costume from her New Year’s stream. This line is often referenced by fans and other virtual YouTubers for its uncharacteristically abstract and meme-like nature, as well as highlighting Korone’s pure and innocent appeal. 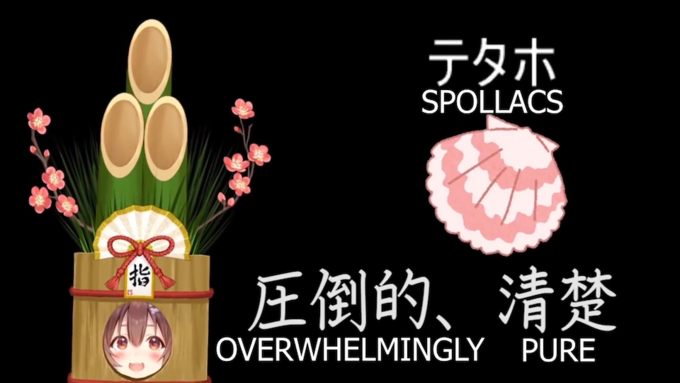 Yubi Yubi (Japanese: 指！指！, meaning “finger! finger!”) is a catchphrase adopted by Korone during her debut stream, during which she realizes she lacks a catchphrase like many other HoloLive streamers. The catchphrase is a reference to the Japanese Yakuza practice of Yubitsume (Japanese: 指詰め, “finger shortening”) in which members of an organization chop off a finger as a show of loyalty or to atone for a crime. Korone jokes that by collecting fingers, her fans will watch her stream to the end, and often references this in fan dialogue and on-stream, in which cartoon fingers are displayed in her background or on-screen.

Nekomata Okayu is a HoloLive member and longtime friend of Korone, at one point having lived together. The streamers often appear on each other’s programs and frequently produce joint content, which has lead fans to depict them as having a sisterly bond. They are often drawn together in fanart, implied to be each other’s “owner”, or shipped together (Examples shown below). 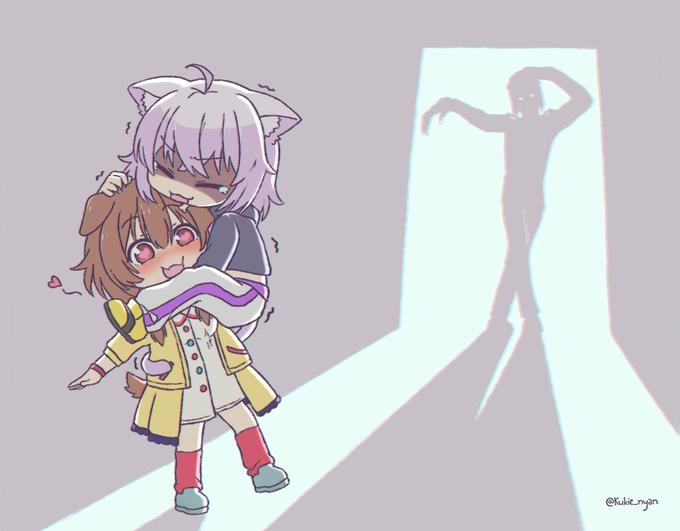 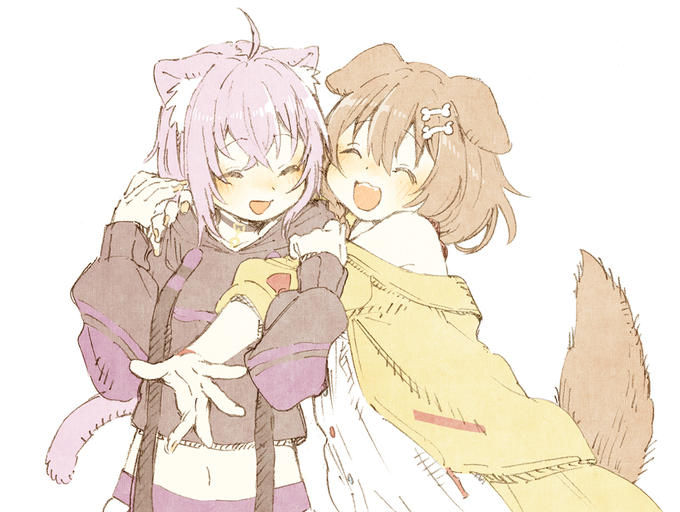 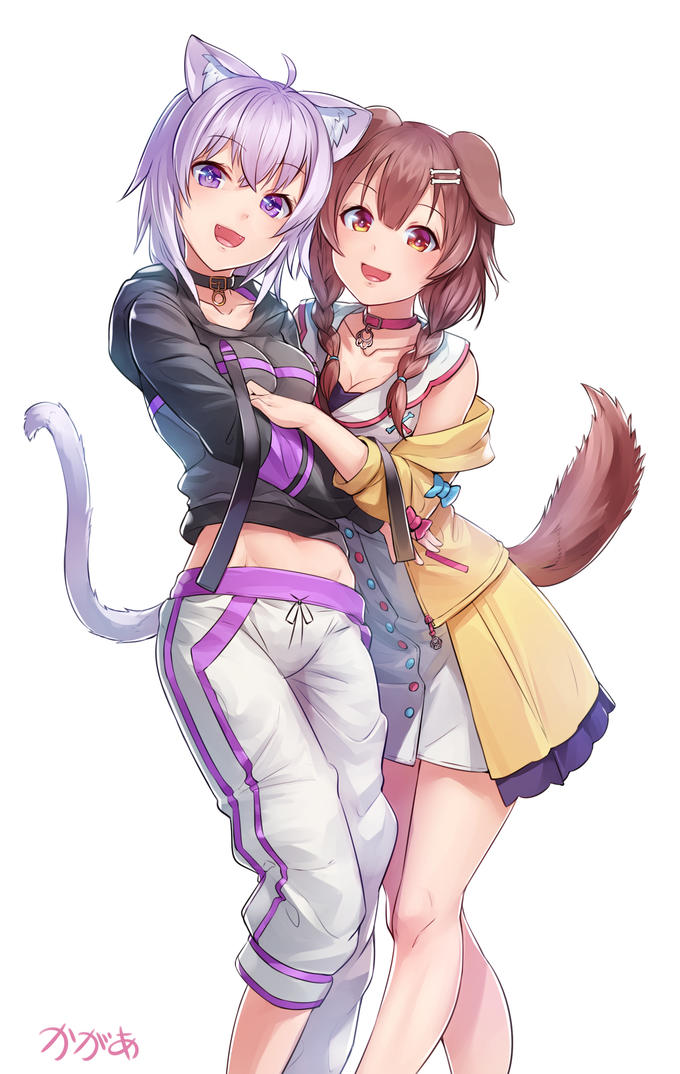 Lifestyle and Lack of Sleep

Both fans and other HoloLive streamers have noted Korone’s willingness to stream for long periods of time, sometimes over 24 hours consecutively. This is reflected on-stream and in fan content in which concern is expressed for her health and jokes that Korone cannot sleep/does not understand the concept of sleeping.

DOOG is a reference to Korone’s Doom stream and an edit of the Doom cover to spell “DOOG”, a reference to her dog character. She is often depicted in fanart with other Doom characters, such as demons, or in the place of Doomguy (Examples shown below). 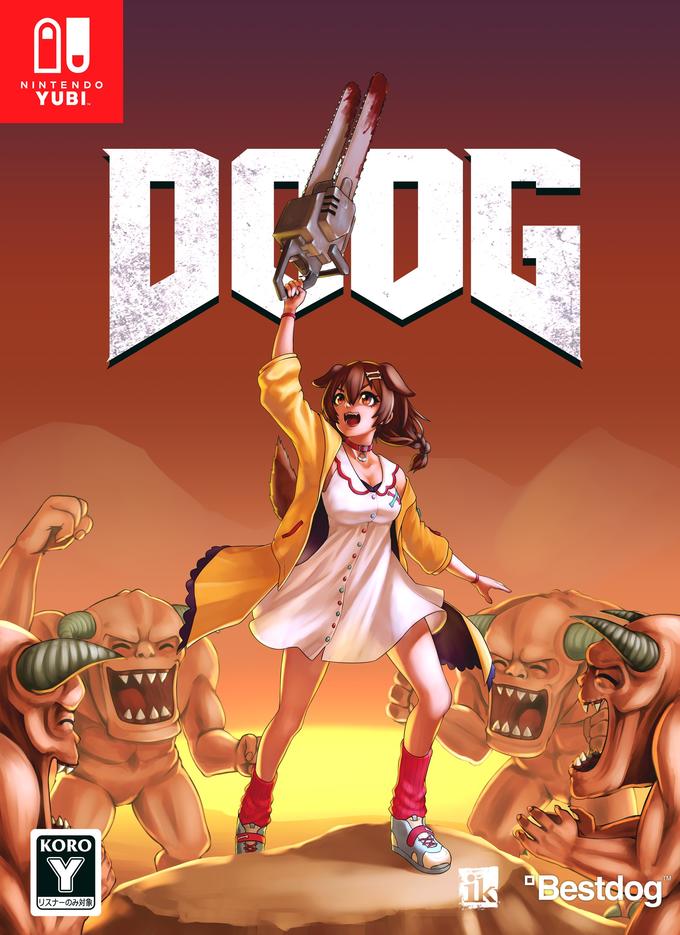 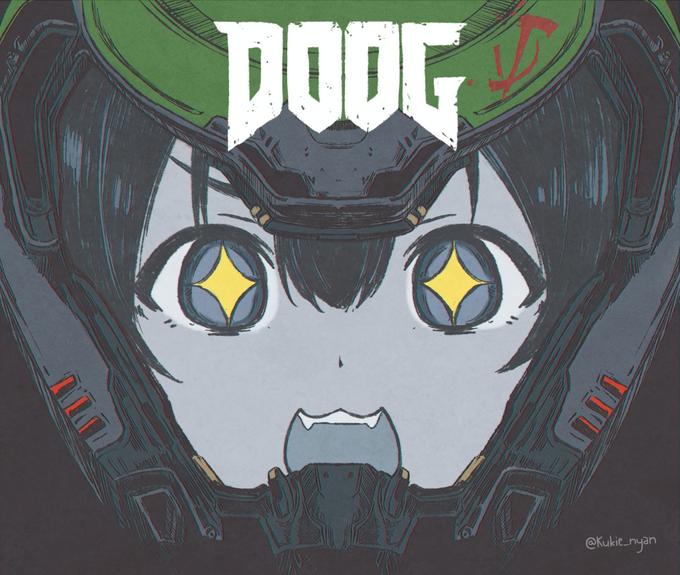 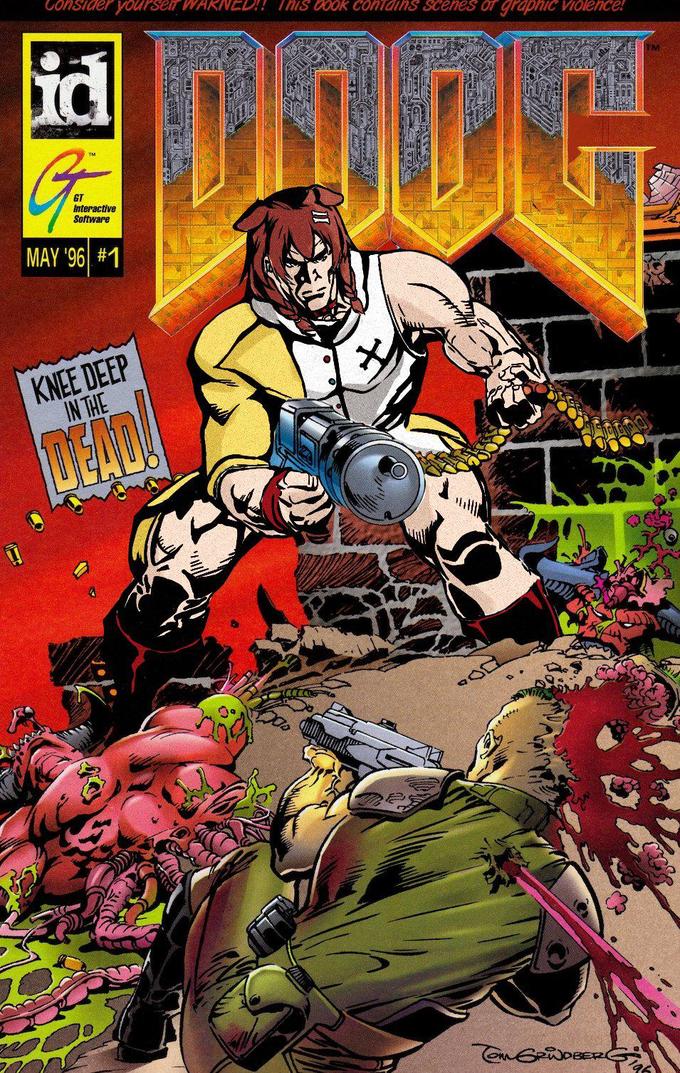 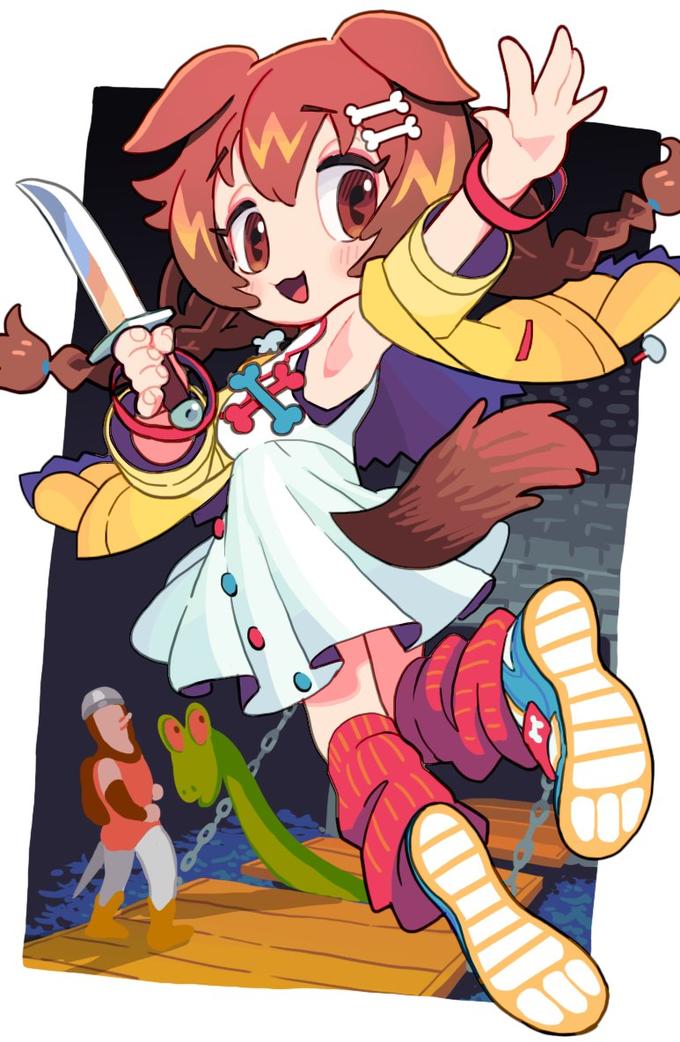 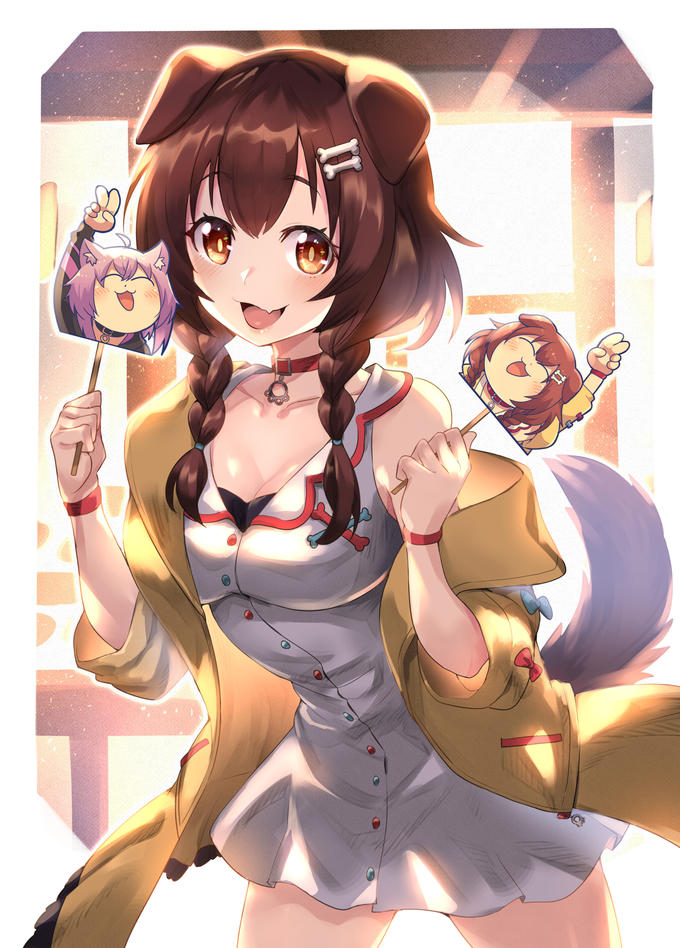 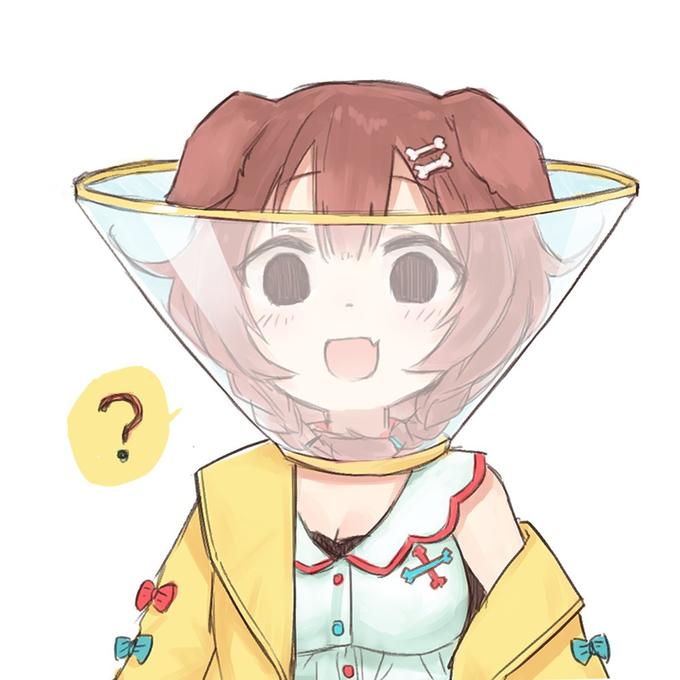 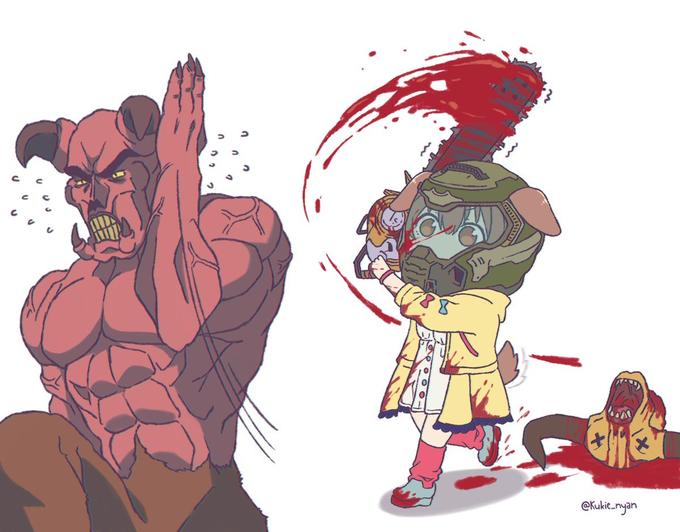 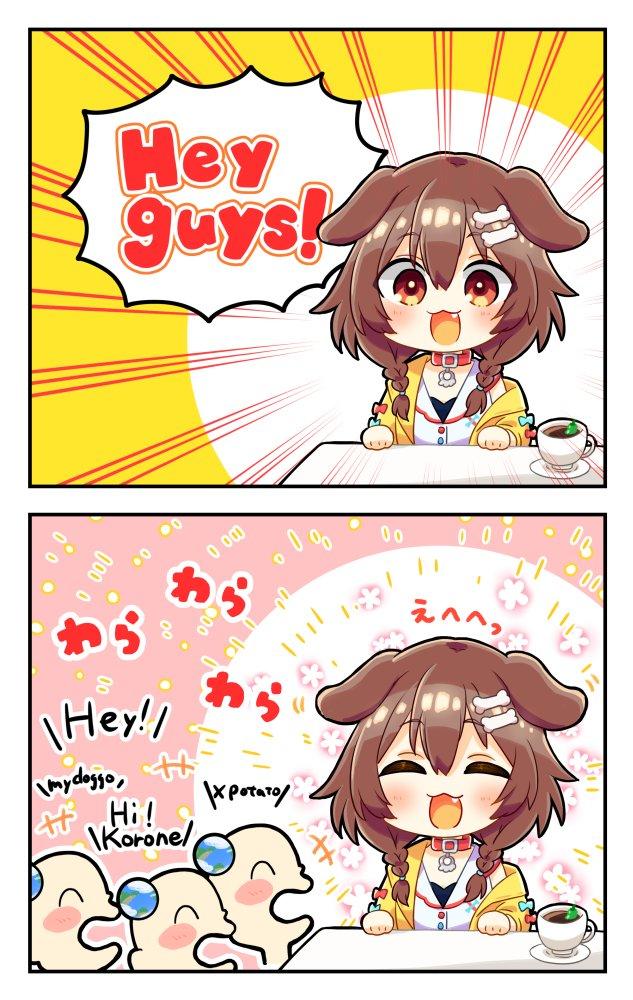