Jake Paul is an American actor who rose to fame through Vine and YouTube before appearing on the Disney Channel show Bizaardvark. He is known for posting clickbait style prank videos on YouTube and gained further notoriety for the drama surrounding a song he recorded in which he bragged about his various successes.

Paul first grew to prominence on Vine. There, he acquired over 5 million followers before the app went defunct (compilation shown below).

On March 27th, 2014, Paul uploaded a compilation of his Vines to YouTube, marking his first video on the site. There, several of his videos racked up millions of views with clickbait titles such as “SHE’S NAKED?!” and “SEXY KILLER CLOWN ATTACKS US (not a joke).”

On March 9th, 2016, it was announced that Paul was cast in the Disney Channel original series Bizaardvark as the character Dirk. Dirk is the star of a show within the show called Dare Me Bro, where he performs crazy dares, not unlike his Vine and YouTube personalities.

On July 22nd, Disney Channel and Jake Paul mutually decided to part ways, with Paul leaving his Disney Channel series Bizaardvark mid-way through the second season. In a statement, a Disney spokesman said:

“We’ve mutually agreed that Jake Paul will leave his role on the Disney Channel series ‘Bizaardvark.’ On behalf of the production company, the cast and crew, we thank Jake for his good work on the TV series for the past 18 months and extend our best wishes to him.”

That day, Paul also released a statement via Twitter. He posted the statement in a screencap from the Notes app on iOS along with the caption “Love you all! Thanks for the support❤️ Can’t wait to continue to grow and conquer 🙌🏼 Jake Paulers always rise💪🏼” The post (shown below) received more than 14,000 retweets and 86,000 likes. 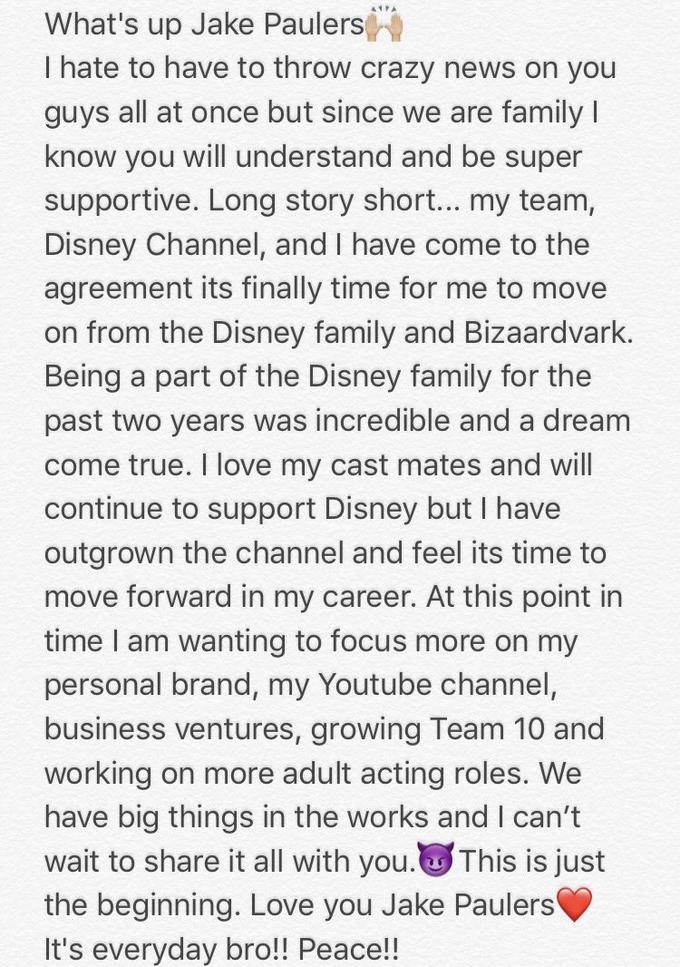 On January 5th, 2017, Paul hid in the bathroom of The White House and stayed there for several hours, leaving in the early morning unnoticed. He posted a video about the stunt (shown below, left). This caused the Secret Service to visit his house after that, which he also posted a video about (shown below, right), though they deemed him a non-threat.

On May 30th, 2017, Paul uploaded a music video for a song called “It’s Everyday Bro” to YouTube, where it gained over 26 million views (shown below). In the video, he brags about his followers and stated that he would soon pass Pewdiepie. Furthermore he made reference to his ex-girlfriend Alissa Violet, another YouTube star, who had undergone a very public breakup a few months prior amid rumors of mutual cheating and that Violet had begun to date Jake’s brother, Logan Paul.

The video soon generated drama between all the involved parties. Following the release of the video, Logan responded by essentially laughing it off in a video (shown below, top left). Then Jake uploaded a diss track directed to his brother (shown below, top right). This continued to escalate as fans of both started to feud with each other, leading Jake to release an apology video (shown below, bottom left). Logan then responded with another, jokey diss track, but couched within it a vlog in which he said he would give Jake a second chance (shown below, bottom right). Two threads about the entire drama were posted to /r/OutOfTheLoop.
Meanwhile, Pewdiepie responded to Jake Paul’s diss in “It’s Everyday Bro” by mocking the video point by point in a video of his own that gathered over 6 million views (shown below).


England Is My City

During “It’s Everyday Bro,” English guest rapper Nick Crompton delivers a verse in which he says “England is my city.” The lyric was mocked online, as England is a country, not a city. On June 21st, 2017, YouTuber Kyle Knight uploaded a video compilation of various popular YouTubers reacting to the lyric, gaining over 287,000 views.

The moment appeared in several remix and YouTube Poop videos following the release of the “It’s everyday bro” video. On June 4th, Aunix uploaded a YouTube Poop video of the lyric, gaining over 1.4 million views (shown below, left). On June 7th, Redditor TheAwesomeGem posted a question about the surge of “England is my city” jokes appearing in comments and videos to /r/OutOfTheLoop. On June 20th, Alpacafries uploaded a Replacement Remix where “England is my city” replaced “every time they say something stupid,” gaining over 572,000 views (shown below, right).
The moment has also inspired image macros and other jokes using various templates (examples shown below). 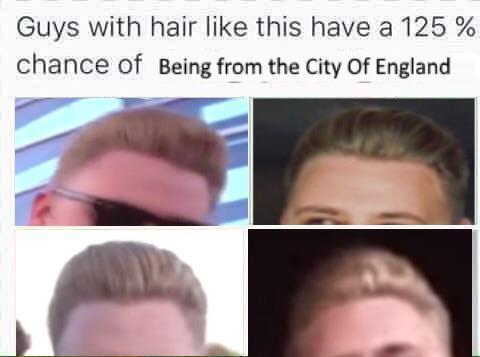 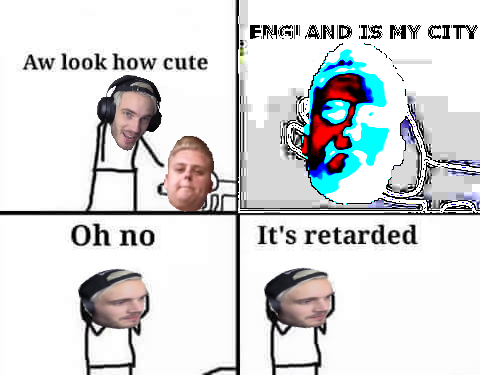 Oh July 17th, KTLA 5 news reported that Paul has been performing stunts in his west-Hollywood neighborhood, causing property damaging and drawing a crowd. His neighbors began investigating a class-action lawsuit against Paul and the property owner.

“We used to be a nice, quiet street, and now we’re just this war zone,” said Paul’s neighbor Maytal Dahan. “We’re families here and we’re more than happy to have them live here if they’re respectful of their neighbors, but they’re not.” 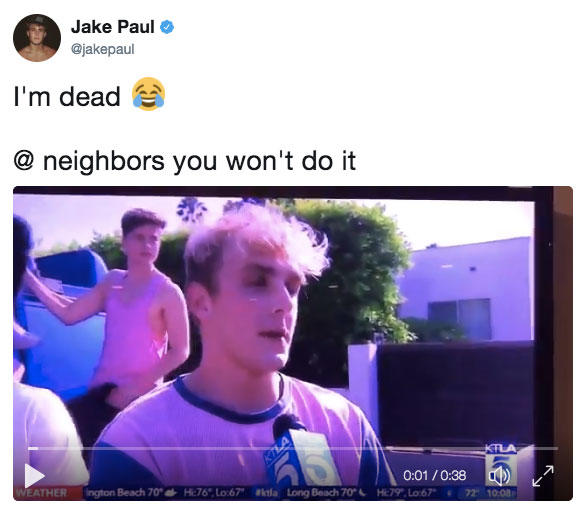 On August 1st, 2017, Jake Paul posted a video entitled “SELF DRIVING TESLA IN DRIVE THRU PRANK (FREAKOUTS).” In the video (shown below), Paul meets a fan with an accent. When the fan tells Paul that he is from Kazakhstan, Paul responds, “It sounds like you’re just gonna blow someone up […] Send the nuke.” The video has been viewed more than 5.5 million times in three days.

Shortly after the video hit the web, fans on Twitter began deriding Paul, calling the video racist. They started expressing their opinion on Twitter under the hashtag #JakePaulIsOverParty. Twitter user @itsRyanButler tweeted the video and wrote, “This is racism to the most extent, and the worst part is that his fans will still support him. #jakepaulisoverparty” The tweet (shown below) received more than 2,800 retweets and 6,400 likes in less than three days.
Arizona looting incident (shown below). The video gained over 93,000 views in a week.
On August 18th, Twitter user @pvppethistory shared a screenshot of a casting call for Jake Paul’s new music video and captioned it, “jake paul casting for a music video during a pandemic about his ‘recent run in with the law’ is so jake paul” (shown below). Various media outlets like Insider and Dexerto reported on news of an upcoming FBI-raid themed Jake Paul music video. 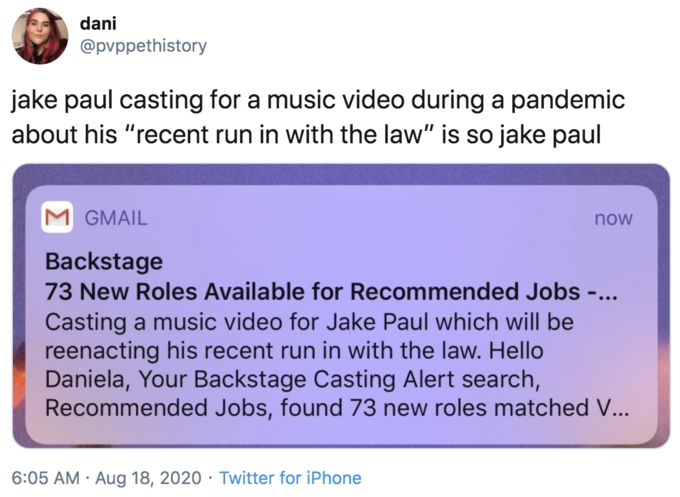 Twitter Users Troll The Site Into Fact-checking Their Tweets That Have Nothing To Do With The 5G Cor...
Poor kid peed his pants and got destroyd
Miranda Sings Responds To Ghostwriter Controversy
Wot?