“I Thought Cats Would Change The World” is a statement made by singer-songwriter and actor Jason Derulo regarding his role in the 2019 film Cats. Due to the film’s unfavorable viewer response, Derulo was mocked on Twitter for the statement.

On August 12th, 2020, Telegraph published an interview with Jason Derulo who stated:

“For the longest time, I was trying to figure out what’s the perfect first role? Cats checked all the boxes. You can’t get a more star-studded cast, you don’t get a more respected director than an Oscar winner, and Rum Tum Tugger is a legacy role, a standout character in a classic musical. Even when I saw the trailer, I thought it looked unbelievable. Like, I know some people saw it and they were terrified, but I got chills down my spine! I thought it was gonna change the world.”

On August 13th, 2020, Twitter users began to share and mock Derulo’s statement. Twitter user @imyourdaisy posted themself and Derulo shaking hands for both “being absolutely baffled by people who did not enjoy watching cats” (shown below, left). The tweet gained over 4,200 likes and 690 retweets in a day. That same day, Twitter user @paulstevex posted, “i want someone to believe in me as much jason derulo believed in cats (2019)” (shown below, right). The tweet garnered over 11,500 likes and 2,100 retweets in a day. 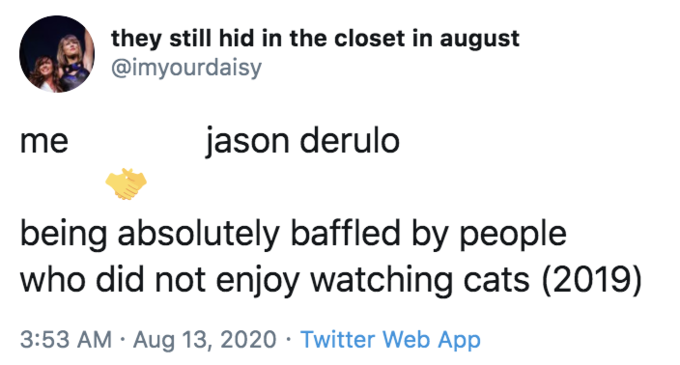 The next day, Twitter user @SanctifiedPunk shared a GIF of Derulo in Cats captioned, “Twitter can be filled with harassment and political nonsense and all kinds of junk. But occasionally there’s pure gold. Like today when I found out that Jason Derulo genuinely thought the CATS movie would ‘change the world’ (shown below). That day, the statement was made into a Twitter event.

Twitter can be filled with harassment and political nonsense and all kinds of junk.

Like today when I found out that Jason Derulo genuinely thought the CATS movie would “change the world”. ✨✨✨ pic.twitter.com/KGNwvs3Hkr 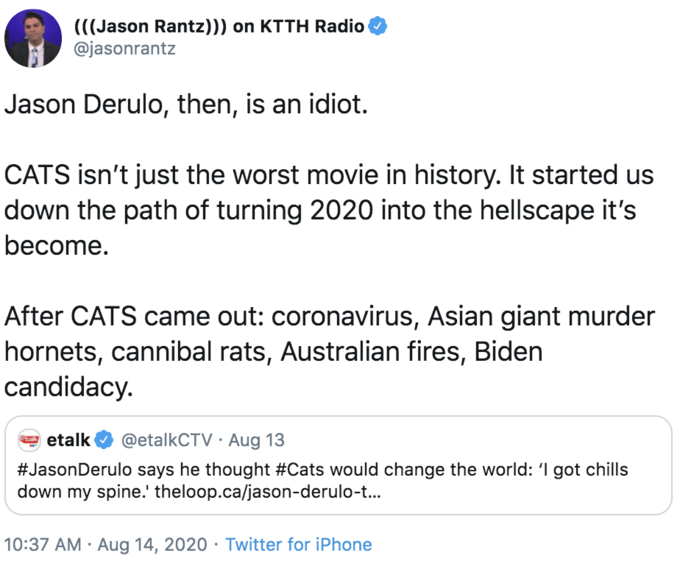 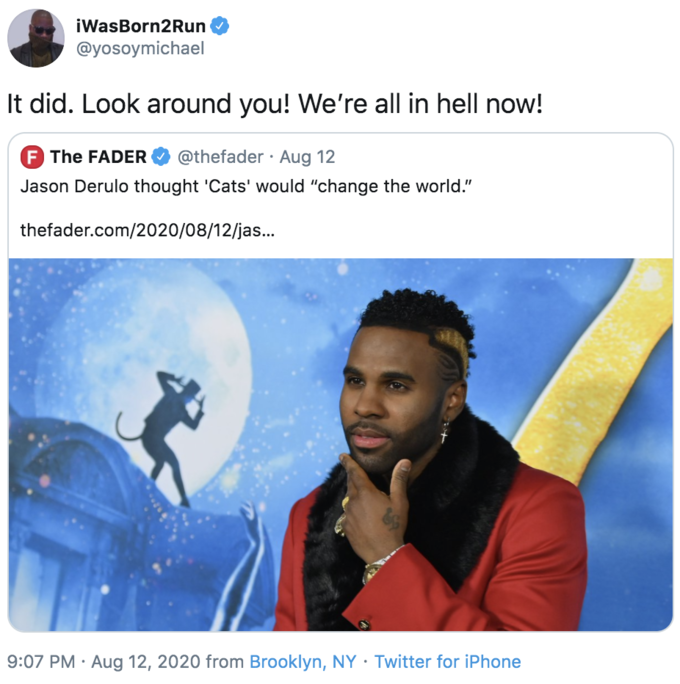 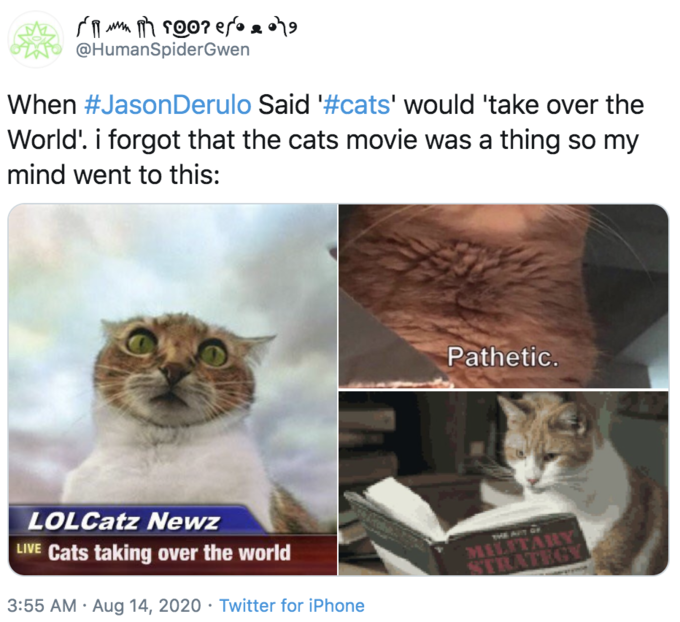 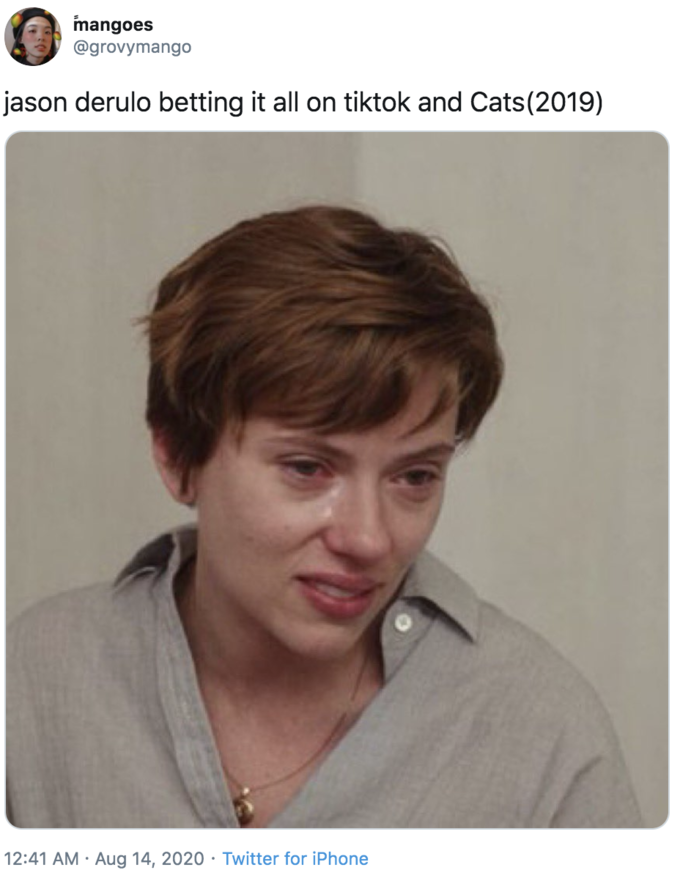 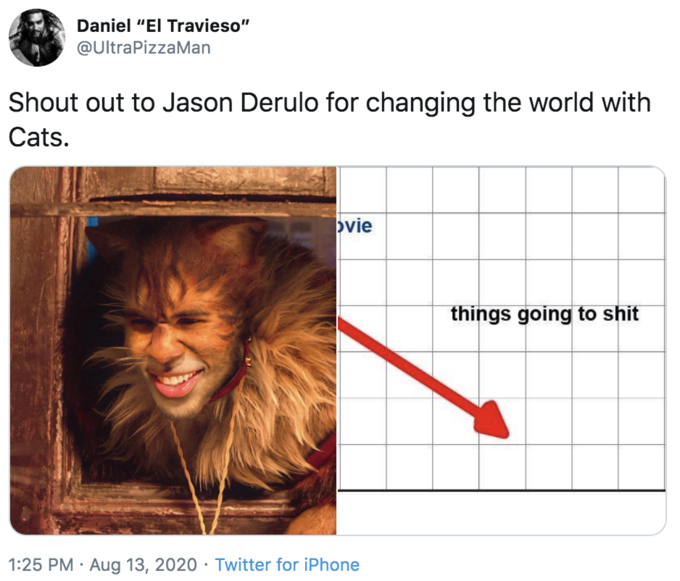 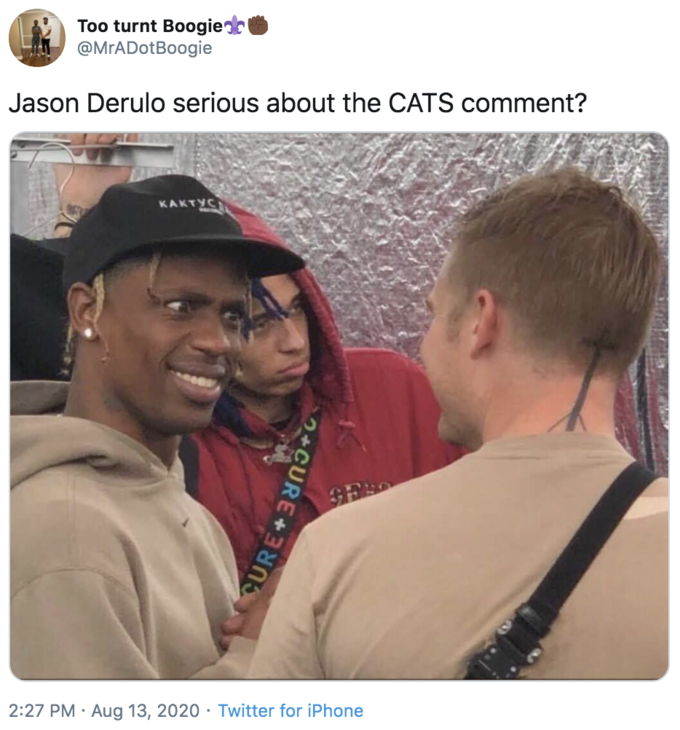