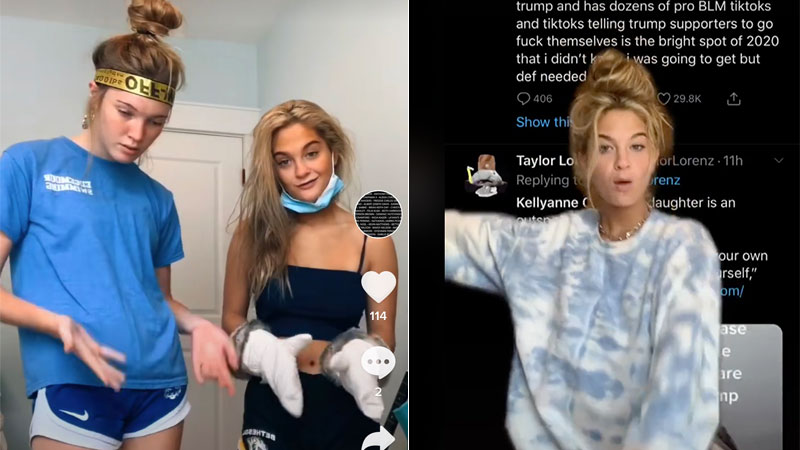 Over the past few years, the media has made a meal over the fact that President Trump’s Counselor Kellyanne Conway’s husband, George, is Trump-hating conservative. All the while, their daughter Claudia has developed a political style all her own, going full leftist on TikTok, posting anti-Trump memes and pro-Black Lives Matter screeds on the lip-syncing app.

First reported by the New York Times’ Taylor Lorenz, Claudia Conway uses TikTok to lambast the President, his policies and the current state of racism in America. Last night, Lorenz reported that Claudia posted Save Barron Trump memes on TikTok.

Her TikToks have made her the target of some pro-Trump criticism on the platform. Though, her videos have made light of the comments, mostly dismissing them in a series of videos. She writes in one TikTok, “why do people hate on trump supporters…like why can’t we just respect everyone’s opinions? SIKE nah block me pls and then educate yourself.” Later, she continues, “hi so if you’re leftist, acab, anti-trump, blm, etc. please interact w this because most of my comments are threats from angry trump supporters.”

♬ Only One (Originally Performed by Nicki Minaj Ft. Drake) – Studio One Project

But Claudia Conway doesn’t just use her TikTok to respond to people questioning her politics. She’s also voiced support for the Black Lives Matter matter/ movement and called for the arrest of the police officers who killed Breonna Taylor in videos.

@claudiamconway saw @jassonn_ do this. we must must must MUST NOT stay silent. ##blm ##acab ##justiceforbreonnataylor

Kellyanne Conway’s family life has been the subject of media intrigue since she first came to public prominence in 2016. Her husband, George Conway, a conservative, has frequently attacked the President on Twitter and in the Washington Post. In 2019, the President called his employee’s spouse “the husband from hell” in a tweet.

George Conway, often referred to as Mr. Kellyanne Conway by those who know him, is VERY jealous of his wife’s success & angry that I, with her help, didn’t give him the job he so desperately wanted. I barely know him but just take a look, a stone cold LOSER & husband from hell!