Le Fishe, sometimes called Le Bathtub Fishe, refers to an image of a carp swimming in a bathtub. A version of the meme, in which the image of the fish is accompanied by the song “La Vie En Rose” by Swedish musician Roland Cedermark in the form of a YouTube video, later became popular among Discord and YouTube communities.

On December 24th, 2010, the blog Christopher’s Expat Adventure posted the earliest known version of the image in a post entitled “Christmas Carp” (shown below). They wrote:

“When you select your carp at the fish vendor you have the option of taking it home alive or they will cut it for you on the spot. It seems that nowadays more and more people only take a live fish home if they have young children.My friend Aleš lives in Břeclav and his mom took a live carp home. His parents are fortunate enough to have a second bathtub downstairs so they didn’t have to share the tub with the fish. He was nice enough to send me a couple of photos of what will eventually be Christmas dinner. 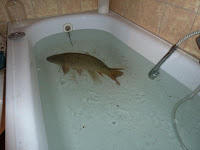 On May 12th, 2016, an anonymous 4chan user posted the image of the fish with the caption le bathtub fishe in the /s4s/ board (shown below, left).

One month later, on June 13th, Redditor JoeDaEskiom shared the post on the /r/4ChanMeta subreddit (shown below, right).