We’ve all heard complaints about women existing on Twitch over the last few years, with an endless series of memes and posts about “thots” who are taking all the precious views, follows and likes (they’re a scarce commodity!) One man, however, is taking the issue to court.

A California man, who claims to suffer from obsessive-compulsive disorder, Crohn’s disease and sex addiction, as well as numerous other afflictions, sued Twitch for $25 million for “overly suggestive and sexual content from various female streamers.” The plaintiff seeks damages for several things, but mostly because he claims he had to stay home and watch these women for entertainment due to quarantine.

In a complaint filed on June 15th in the Santa Clara Superior Court of California, Erik Estavillo claims that the content on Twitch has made his conditions much worse, detailing the bodily harm due to Twitch’s lack of filtering.

“Twitch has extremely exacerbated his condition by displaying many sexually suggestive women streamers through Twitch’s twisted programming net code,” the complaint states, “making it nearly impossible for the plaintiff to use Twitch without being exposed to such sexual content.” 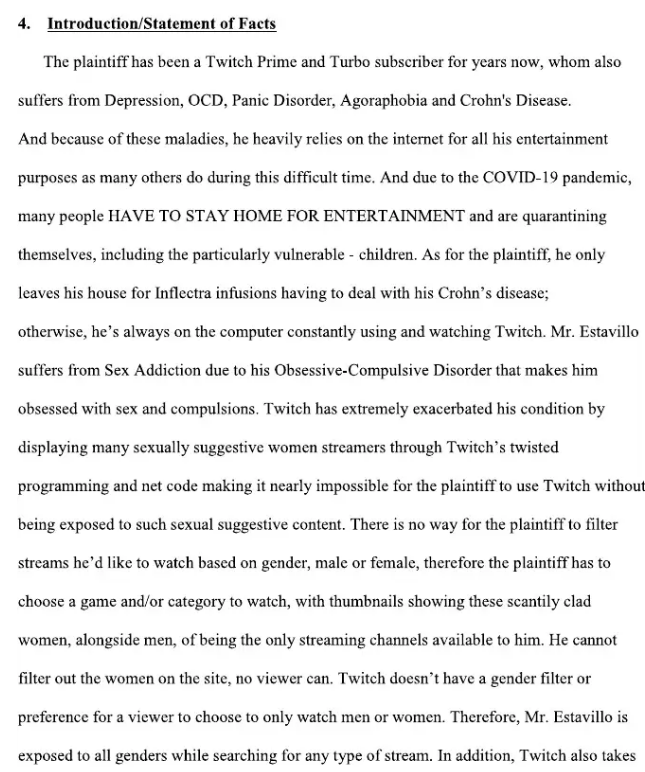 He also claims that Twitch takes advantage of viewers like him, allowing them “Subscribe, Donate, or Pay Bits” to “these women streamers who are only streaming with the sole purpose of taking advantage of such disadvantaged individuals who just want to watch a video game stream through Twitch.”

Estavillo’s complaint, which is filled with “suggestive” images of female Twitch streamers, calls for the “permanent banning” of streamers who continue to “expose viewers who just want to see people playing video games on Twitch, but instead get exposed to sexually addictive material and content on a consistent and regular basis daily.”

The complaint goes on to describe some physical issues the plaintiff experienced as a result of his viewership. These include “chaffing his penis,” damaging his retina because he “stays up for hours staring at the breasts of girl streamers,” and ejaculating on his PC monitor, “causing a short circuit and small fire within the electrical system of his gaming rig and causing his apartment to black out temporarily.”

“Eye drops do nothing to hide his shame from his parents,” the complaint reads. “He is often questioned by people he comes into contact with as to why his eyes are so bloodshot and red.”

Estavillo also takes issue with how Twitch filers its site, arguing that users should be able to filter by gender. He currently follows 786 female streamers and 0 male streamers. As such, he’s forced to choose thumbnails “showing these scantily clad women.”

This is not the first lawsuit Estavillo has filed. He’s also sued Microsoft, Nintendo, Blizzard and Sony.

Ridiculously Thirsty Copypasta For Vaporeon Is A Lot To Take In
Well no sh#t
The Meme Of The Month: March 2020
11 Examples Of Thirsty "Spec Ops Guy" Simps