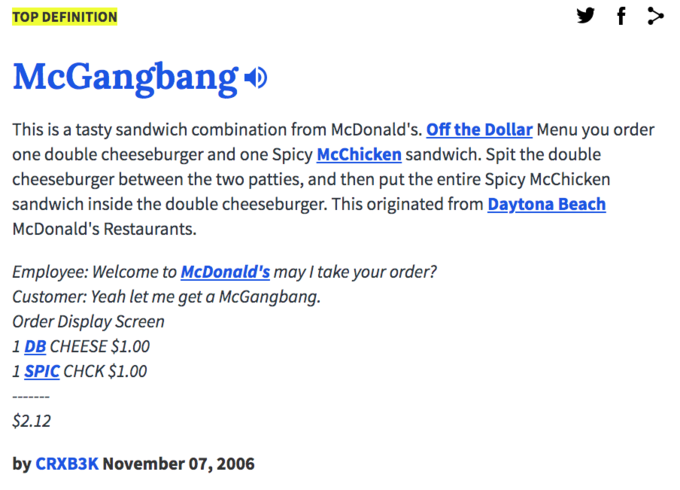 McGangbang is an off-menu item comprised of the McDonald’s food products the double cheeseburger or the McDouble and the McChicken in which the customer puts the McChicken between the burger patties.

The McGangbang likely existed before appearing online, but Urban Dictionary entry, published on November 7th, 2006, may be the earliest available reference to the item online. User RXB3K defined the item, “This is a tasty sandwich combination from McDonald’s. Off the Dollar Menu you order one double cheeseburger and one Spicy McChicken sandwich. Spit the double cheeseburger between the two patties, and then put the entire Spicy McChicken sandwich inside the double cheeseburger. This originated from Daytona Beach McDonald’s Restaurants.” The post received more than 3,000 upvotes in less than 15 years (shown below).

On December 1st, 2008,YouTuber bkburnaz shared the video “McGangBang Sandwhich From McDonalds They love to see you smile.” The post received more than 100,000 views in less than 13 years (shown below).

Over time, references to the McGangbang increased online. On November 11th, 2009, YouTuber yeeitsaj shared the video “How to Make a McGangBang.” The post received more than 111,000 views in less than 11 years (shown below, left).

The following year, YouTuber clowmuhfukka shared a video in which the filmer orders a McGangbang. The post received more than 6,200 views in less than 11 years (shown below, right).

On November 22nd, 2011, Redditor Barkingpanther shared an image of the sandwich on the /r/food subreddit (shown below). 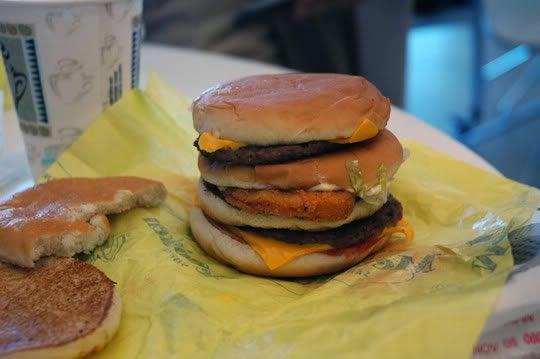 On June 25th, 2020, Twitter user @JJ_DjCritical tweeted a video of Instagram user saweetie making a sandwich that is similar to McGangbang. The video received more than 1.4 million views, 10,000 likes and 5,200 retweets (shown below).

Some responded to the video by pointing out the similarities, causing “McGangbang” to trend on the site. Twitter user @Rodrriiiigo tweeted, “You guys have never had a Mcgangbang?” The tweet received more than 1,300 likes and 400 retweets in less than 24 hours (shown below). 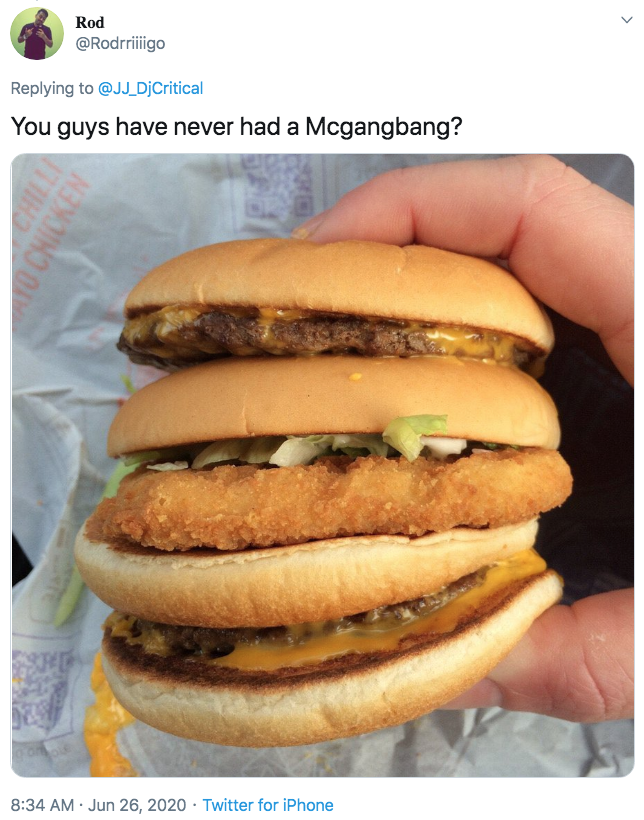 Those Who Complete The Flex Challenge Are Definitely Allowed To Flex
"Squirt Gun Priest" Blesses Internet With Holy Meme
Over A Decade Since It First Aired, A Glee Scene Becomes A Meme
I love this game