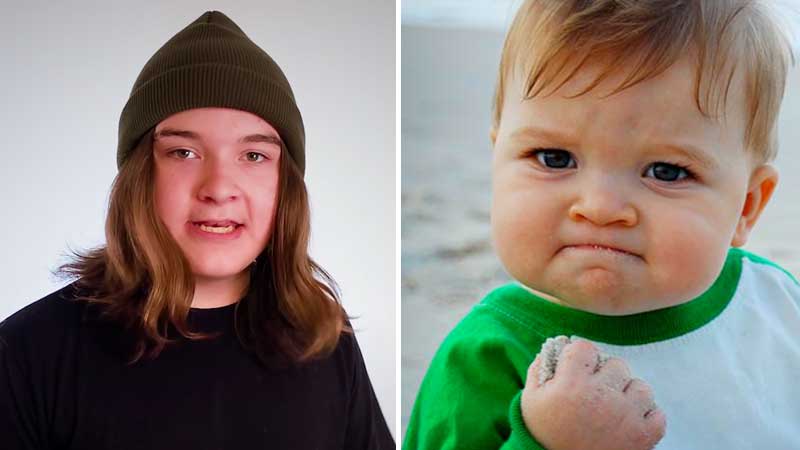 Being a meme is no easy thing, and rarely does anyone choose to be a meme–let alone as a baby. The choice was never Sam Griner’s, the former baby known as Success Kid, but he’s managed to get through it.

Now a teenager, Sam shared his going from a baby eating sand to one of the most famous babies in the world in a new video from BuzzFeed. In the video, Sam and his family show how the meme has impacted their lives, what it’s like being an icon of positivity and how the meme helped save his father’ life.

“There wasn’t really a before,” says Sam Griner. “My whole life has been me being Success Kid.”

The meme started in 2007 after Sam’s mother, Liney, shared the photograph of 11-months-old Sam about to eat a fistful of sand on Flickr. Who wouldn’t want to share the picture? While the post was popular on Liney’s Flickr, it would take roughly a year for the Griners to notice something special about the photo.

Suddenly, in about 2008, they started seeing the picture everywhere with captions like “I hate sandcastles” and “Ima fuck you up.” The internet had claimed the photograph, leaving the family to hope that the masses decided on a positive portrayal of baby Sam. Eventually, the meme became an Advice Animal classic under the title “Success Kid.” The title was a relief to the family.

“The great thing about the Success Kid meme is that not only is it about success, but it’s about unlikely success,” said Justin Griner, Sam’s father.

Success Kid, to the family, had deeper resonance. Sam, Liney says, was born prematurely and had brain surgery at 6-weeks-old.

“Seeing it called Success Kid just warmed my heart,” said Liney. “I felt like that was the most appropriate title for him, and it was given to him by the internet.”

Over the next few years, the meme was everywhere: commercials, tweets from the White House and meme after meme. Sam, for his part, has understandably mixed feelings about living life as a meme. Not every teen wants to pose for pictures with strangers. However, the notoriety and popularity of meme helped the family successfully crowdfund money for his father’s kidney transplant.

“I’m very thankful for everybody who has helped us and everybody who uses the picture,” says Sam. “A lot of nurses and doctors use it to get through the day. I’m very happy that people who save others’ lives is using my picture when I was doing nothing but eating sand.”

Turns out, sometimes eating sand can change the world.

Watch the full video about the real-life success of Success Kid below.

Fallout: Of The Sky
Nice
Death
"Why? Why? Why? Why?" Biden Feverish Response To Questions About Bernie Goes Viral