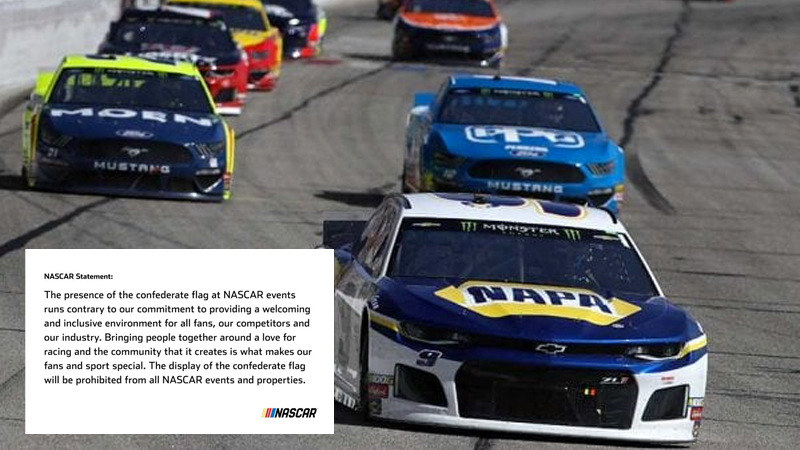 Amid mass protests around the world against police brutality and racism in the wake of George Floyd’s death, a black man who died in police custody, NASCAR has finally conceded that the Civil War ended more than 150 years ago and banned confederate flags at NASCAR events.

The ban comes days after NASCAR driver Bubba Wallace, the only African American in NASCAR’s top circuit, called for a ban on the flag.

“The presence of the confederate flag at NASCAR events runs contrary to our commitment to providing a welcoming and inclusive environment for all fans, our competitors and our industry,” the organization wrote in a statement.

“Bringing people together around a love for racing and the community that it creates is what makes our fans and sport special. The display of the confederate flag will be prohibited from all NASCAR events and properties.”

Many online praised the decision, declaring it long overdue.

“NASCAR is not closing a door on you. NASCAR is opening the door to everyone.”

–@MartySmithESPN’s message to those who feel angry over NASCAR’s decision to ban the Confederate flag. pic.twitter.com/xci7tlf5aV

In less than a week NASCAR sent a significant message denouncing racial injustice, allowed for peaceful protest during the national anthem, embraced an inclusiveness initiative with the LGBTQ community and banned the Confederate Flag – the sport deserves well-earned admiration

How we pulling up to NASCAR races pic.twitter.com/LpJnwYz2aR

Others joked about using the confederate flag as a source of pride, which ignores the confederacy’s loss in the Civil War.

If you’re upset about NASCAR banning Confederate flags, wait until you find out how the Civil War ended.

To be clear, while NASCAR is banning the Confederate battle flag they’ll still use the final Confederate flag to show there’s one lap to go pic.twitter.com/8QBWAs0bmA

Another look at the Bubba Wallace paint scheme for Martinsville: #nascar ⁦@NASCARONFOX⁩ pic.twitter.com/38dIi3aA3H

But not every NASCAR fan was a fan of the change, with some vowing to bring the flag to events.

Good luck with that, I’ll be bringing mine to every race #NASCAR

Well its been a fun ride and dream come true but if this is the direction Nascar is headed we will not participate after 2020 season is over , i don’t believe in kneeling during Anthem nor taken ppl right to fly what ever flag they love. I could care less about the Confederate Flag but there are ppl that do and it doesn’t make them a racist all you are doing is f—ing one group to cater to another and i ain’t spend the money we are to participate in any political BS!! So everything is for SALE!!

In his three years on the circuit, Ciccarelli has never won any of his 18 races.

Never Expected Such A Harsh Burn From A Jeopardy! Contestant
15 Memes Straight Out Of The Good Place
"OK Boomer" Meme Hits K-pop In New Stray Kids Song
COINCIDENCE I THINK NOT