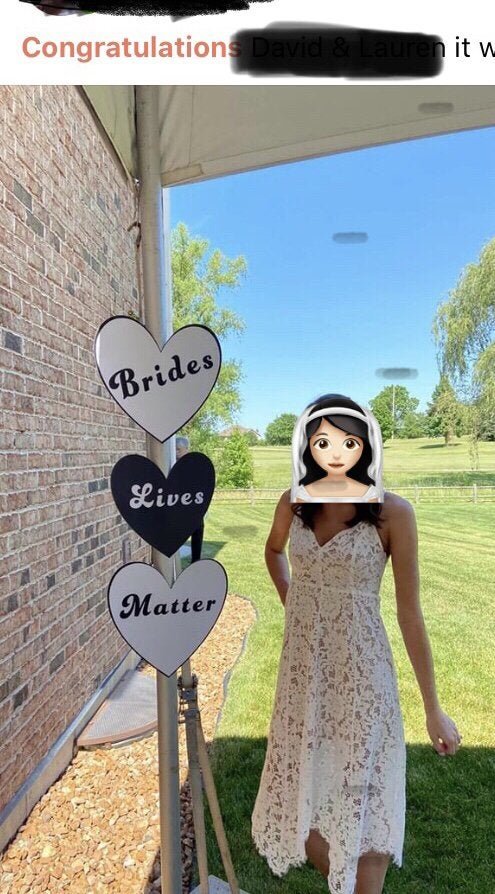 It’s a general rule of the internet that whenever a sensitive topic enters American consciousness, someone, somewhere, will reappropriate it in an incredibly tacky way (remember the 9/11 Mattress Ad? Good times).

The post was shared in Reddit’s /r/weddingshaming and Facebook’s private group, “That’s It, I’m Wedding Shaming,” two groups devoted to mocking tacky wedding festivities. While both groups have obviously seen their fair share of wedding atrocities, this was beyond the pale. “I think this very well may be the worst thing I’ve ever seen on this sub,” said one commenter. “This picture makes a compelling argument for the opposite,” said another.

While many in the comments section viewed the picture as incredibly offensive to the Black Lives Matter movement and its fight against racism and police brutality, it is yet to be confirmed if the picture is in fact real. One Redditor voiced the faint hope that it was photoshopped, and other news organizations have yet to track down the original photo. Another Redditor pointed out “a few odd things” in the photo, and the four horizontal black lines in the photo may suggest some tampering beyond blocking out the bride’s face.

If the photo is indeed a photoshop job, it’s an excellent troll that perfectly succeeded at stirring outrage from its intended audience. If not, well, it is indeed one of the tackiest and tone-deaf images one could post on the internet in the current climate.

If you read this comment shovel
Making happiness (meme stolen)
Animal Crossing Character Is So Popular, People Are Trying To Sell Him On eBay
Eminem Pulls Out A Rocket Launcher And Shoots Off A Popular New Template