“Two Trucks,” also called “Two Trucks Having Sex”, is a song created by Lemon Demon, a project of Internet artist Neil Cicierega. The song’s humorous lyrics gained popularity in 2018 and 2019 as a form of shitposting on Tumblr.

On May 3rd, 2013, Lemon Demon released a song called “Two Trucks” on music hosting site Bandcamp as part of The Nature Tapes EP. A description of the song on Genius summarizes its themes: “Lemon Demon’s ‘Two Trucks’ calls on the imagery of American machismo to lampoon its traditions and expectations.” The song was uploaded to Cicierega’s YouTube channel on December 31st, 2013, receiving over 1.4 million views in six and a half years (shown below).

Two Trucks received considerable attention on Tumblr in 2016 and 2017 before exploding in popularity in early 2018. Tumblr user communismkills posted the song’s lyrics on July 20th, 2016, receiving over 15,000 notes in four years. On March 26th, 2017, Tumblr user e8luhs included Two Trucks lyrics with their Homestuck fan art inspired by Tyler, the Creator and SpongeBob in sunglasses. The post gained over 1,100 notes in three years (shown below). 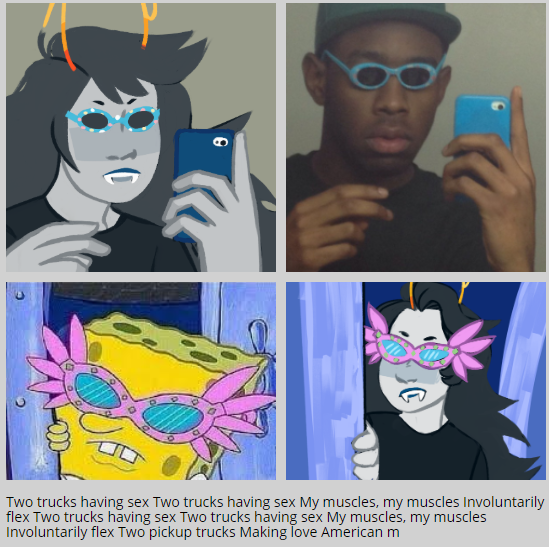 On July 12th, 2017,Tumblr user prfmemes made a parody of Owl City’s song Fireflies with “Two Trucks,” receiving over 41,000 notes in three years. On December 7th, Tumblr user mayfu-was-taken posted an I Will Survive meme using the song’s lyrics, gaining more than 2,500 notes in two and a half years (shown below).

On June 17th, Cicierega answered a question about Two Trucks on his Tumblr blog, receiving over 21,000 notes in two years (shown below).

True 🧊
The Only Robot You Need For This Pandemic
Hahaha
You get it.