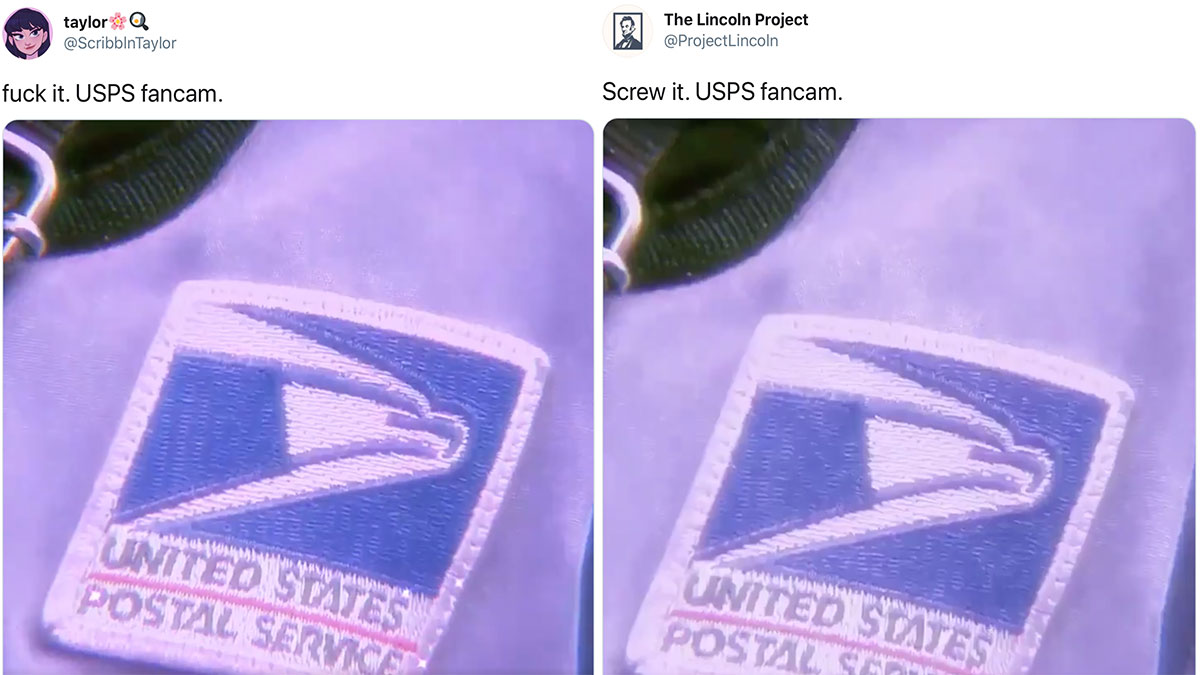 Over the last few months, the Lincoln Project, a NeverTrump Republican PAC aimed at appealing to Democrats and center-right Republicans, flooded Twitter feeds with memes, jokes and snark attacking President Trump. Its meme work may be a hit with some on the left, but others are now accusing the group of stealing tweets, jokes and original content.

The most recent accusation occurred over the weekend after the Lincoln Project posted a “USPS fancam” set to a remix of The Marvelettes’ classic “Please Mr. Postman.” Twenty-six thousand retweets later, Twitter calculated more than 1.2 million views for the video.

While it might be kind of an innocuous tweet criticizing the Trump administration’s recent attacks on the United States Postal Service, the video is now a source of controversy. Roughly 24 hours before the Lincoln Project’s post, Twitter user @ScibbinTaylor shared the same video set to Cardi B and Megan Thee Stallion’s hit song WAP.

Eagle-eyed tweeters noticed the similarities between the videos and called out the Lincoln Project in the comments, accusing the PAC of “stealing content.”

The fancam tweet incident wouldn’t be a first Lincoln Project. For the past month, comedian and video editor Vic Berger repeatedly tweeted that the group stole his content. In July, he wrote that the NeverTrumpers took and edited an image he made of President Trump sitting behind several framed photographs of Trump with the late convicted sex offender Jeffrey Epstein and Epstein confidant Ghislaine Maxwell.

I made this image and the Iraqi child-killing neocons at The Lincoln Project stole it. https://t.co/peMclEguWg

Throughout the summer, others accused the group of stealing tweets, including content from popular accounts, such as that of CNN’s Andrew Kaczynski, who has more than 330,000 followers.

Yesterday, as the news of the fancam accusation spread on Twitter, NBC reporter Brandy Zadrozny shared several other tweets that highlight a pattern of supposed meme theft by the Lincoln Project.

Stealing from creators is a nonpartisan crime @ProjectLincoln. pic.twitter.com/7ps0mHvuhh

“Stealing from creators is a nonpartisan crime,” Zadrozny wrote. However, it remains to be seen what, if any, punishment will come of these infractions. Outside of the ongoing criticisms of the group, such campaigns have not stopped The Lincoln Project from this behavior. As of this morning, the fancam tweet and Berger’s image remain on the Lincoln Project’s Twitter feed.