New York TImes Tom Cotton Op-ed Controversy refers to the backlash against the New York Times for publishing an op-ed piece by Arkansas Republican Senator Tom Cotton advocating for the use of the U.S. military to quell the 2020 George Floyd Protests. While James Bennet, the Opinions page editor, stood by publishing the piece on the grounds it wanted to portray a variety of opinions on the subject, critics, including workers at the New York Times, have argued that publishing the piece endangered black lives and was a complicit endorsement of fascism and military occupation.

On June 3rd, 2020, as the George Floyd Protests continued and incidents of police violence and looting spread, the New York Times published an op-ed written by Arkansas Republican Senator Tom Cotton titled, “Send In the Troops.” The piece advocates for military intervention in the protests, with Cotton writing, “One thing above all else will restore order to our streets: an overwhelming show of force to disperse, detain and ultimately deter lawbreakers… it’s past time to support local law enforcement with federal authority.”

The piece and the New York Times decision to publish it was quickly met with outrage from readers on Twitter. Minutes after it was posted, Twitter user @karenyhan posted a screenshot of the article’s title, writing “hey @nytimes what the fuck is this?”, gaining over 6,900 retweets and 39,000 likes (shown below, left). User @aquariaofficial wrote, “This is alarming + incites terror and normalizes martial law within states. NYT is irresponsible for publishing this article and there’s no way in HELL I’ll be following the opinion of a “Mr. Tom Cotton,” a Republican senator from Arkansas. We do not need troops. We need justice,” gaining over 530 retweets and 2,400 likes (shown below, right). 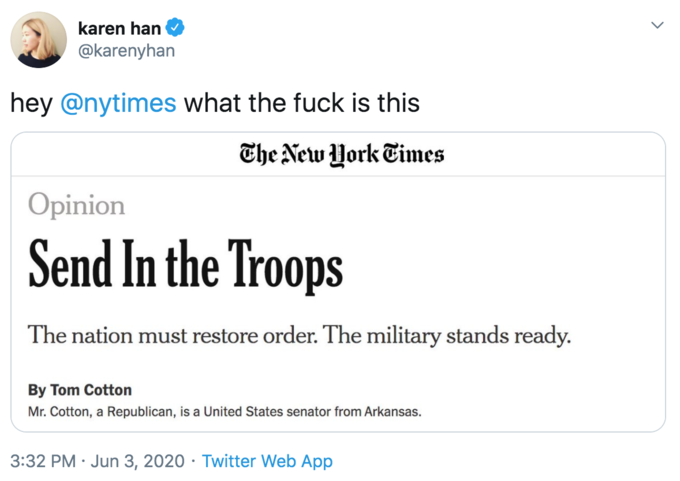 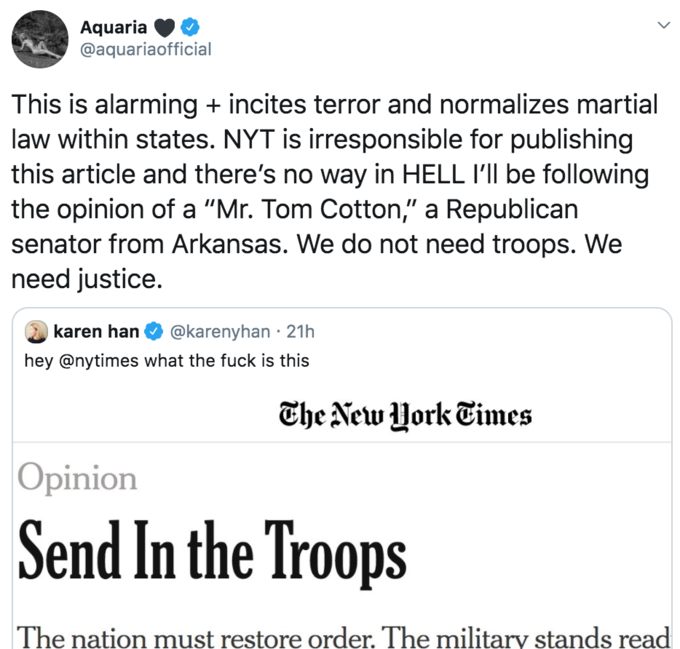 Others argued that publishing the piece would endanger the Times’ very own employees, particularly as several instances of police attacking journalists covering the protests were caught on camera. Several Times employees tweeted “Running this puts Black @nytimes staff in danger.” Times employees also sent a letter to editors and executives at the paper, writing:

“We believe his message undermines the work we do, in the newsroom and in opinion, and violates our standards for ethical and accurate reporting for the public’s interest. It also jeopardizes our journalists’ ability to work safely and effectively on the streets…. In publishing an Op-Ed that appears to call for violence, promotes hate, and rests its arguments on several factual inaccuracies while glossing over other matters that require–and were not met with–expert legal interpretation, we fail our readers…. Heeding a call to ‘send in the troops’ has historically resulted in harm to black and brown people, like the ones who are vital members of The New York Times family.” 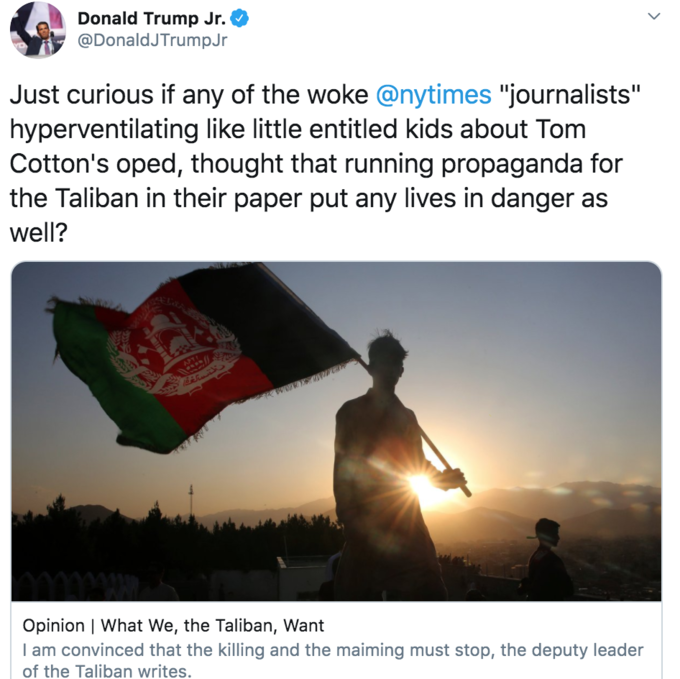 ” class=” kym-image image-auto-link” id=”photo_1858059″ title=”Trump jr”>
Bennet defended the publication of the Cotton piece in a Twitter thread, saying “Times Opinion owes it to our readers to show them counter-arguments, particularly those made by people in a position to set policy. We understand that many readers find Senator Cotton’s argument painful, even dangerous. We believe that is one reason it requires public scrutiny and debate.” 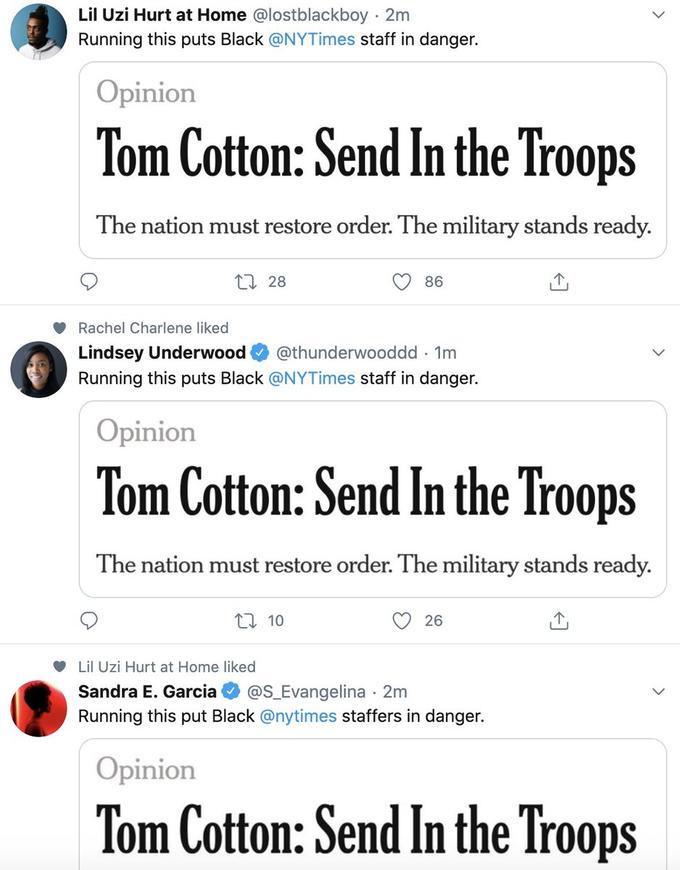 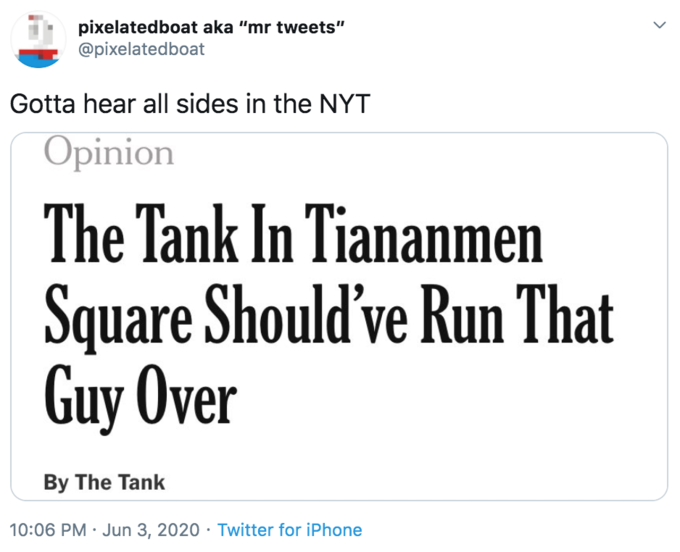 "Work Bae" Saga Ends In Cancelation
Blood-Fueled Machine Descents Into Hell, Gets Hornyposted On Twitter
This is me but I do side quest first
Brian Williams And NYT Journalist Roasted After They Fail Basic Math On Air