Nicola Sturgeon’s Eyebrow Raise refers to a GIF that was created of First Minister of Scotland and Scottish National Party (SNP) leader, Nicola Sturgeon raising her eyebrow with a sarcastic smile on her face.

Ahead of the 2017 United Kingdom general election, Nicola Sturgeon participated in a series of television debates. One of them was the ITV Debate which included her alongside the leaders of the Green Party, Liberal Democrats, the United Kingdom Independence Party and Plaid Cymru.

During the debate, Paul Nuttal, leader of the United Kingdom Independence Party continued to mix Plaid Cymru leader Leanne Wood’s name up with former Green Party leader Natalie Bennett, who appeared on a previous ITV debate. After continuing to call Leanne, “Natalie”, she called him out on it and Caroline Lucas, leader of the Green Party, along with Leanne Wood and Nicola Sturgeon reacted to it with Nicola Sturgeon raising her eyebrows after the mix up occurred (shown below).

On February 22nd, 2019, the official GIPHY account of the Scottish National Party shared a GIF of the moment. Within one year, the GIF received more than 1.4 million views (shown below).

The reaction became one of the most popular GIF from the 2019 United Kingdom General election campaign and was used by the SNP on campaign videos and pictures (examples below, left).

Sky News’ “Under the Radar” program looked at the GIF and said that it was the most popular used GIF which has been viewed 1.2 million times (shown below, right). 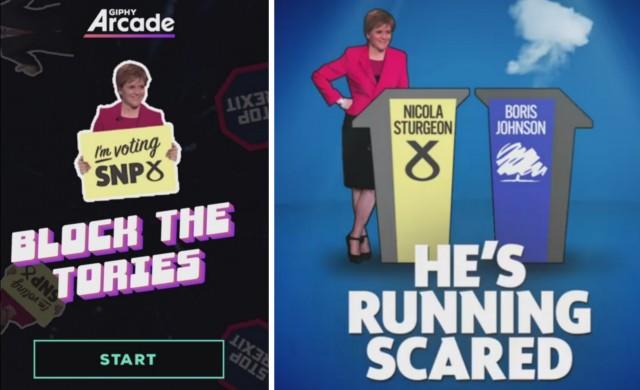