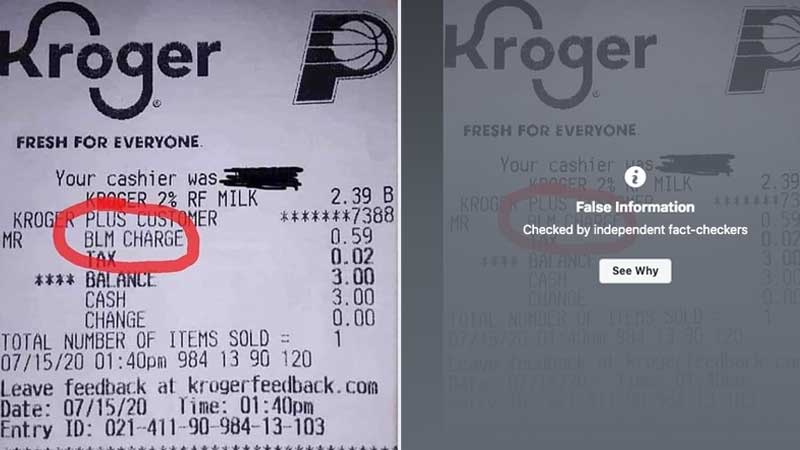 Attention: Kroger shoppers, a “BLM” charge, like the one found in a viral image, is not real.

Over the weekend, a doctored receipt from the Kroger supermarket chain went viral over a suspicious “BLM Charge” of 59 cents. What is a “BLM Charge”? Well, if you look online, many seem to think that it is a Black Lives Matter charge.

@kroger: What is the “BLM Charge” on this receipt? Is it Black Lives Matter? pic.twitter.com/n6nSgfSXU1

While Kroger has expressed support of the Black Lives Matter movement, they have yet to begin charging customers for that support. The receipt is a photoshop. An image that Snopes calls “False.”

The original receipt is from a different viral post about Kroger’s genuine “change shortage.” On July 17th, Facebook user Freda Ballard shared a photograph of a Kroger receipt that includes a “Change Shortage” line instead of the “BLM Charge.” The post reads, “Stopped by Kroger today for just a gallon of milk. Seems due to this ‘Change Shortage’, their new policy is to round every cash purchase UP to the next full dollar!” Within two weeks, Facebook users shared the image more than 110,000 times.

Kristal Howard, the head of corporate communications and media relations at The Kroger Company, told the AP the image was “absolutely photoshopped.” She said, “It’s actually a dupe of another receipt that was circulating online earlier this week.”

A spokesperson for Kroger later clarified that the charge is due to a “shortage of coins in the system. They continued:

It is not a fee; we’re not charging anything. This is just adapting to the shortage of coins in the system and we’re trying to be as creative as we can to help work through this.

On Jue 11th, The Federal Reserve announced a coin shortage due to the coronavirus. As such, they began rationing coins to business. According to Heavy, “Kroger and many other businesses are having to find creative ways to handle their coin shortages. Howard told AP that they’re asking for customers to pay with a card instead, donate the rounded up cash payments to charity or accept their coin change on loyalty cards for a future visit.”

True fact
Ninja Has A Hard Time Making A Sandwich
Mannie Fresh And Scott Storch Duke It Out On Instagram Live
Who agrees???