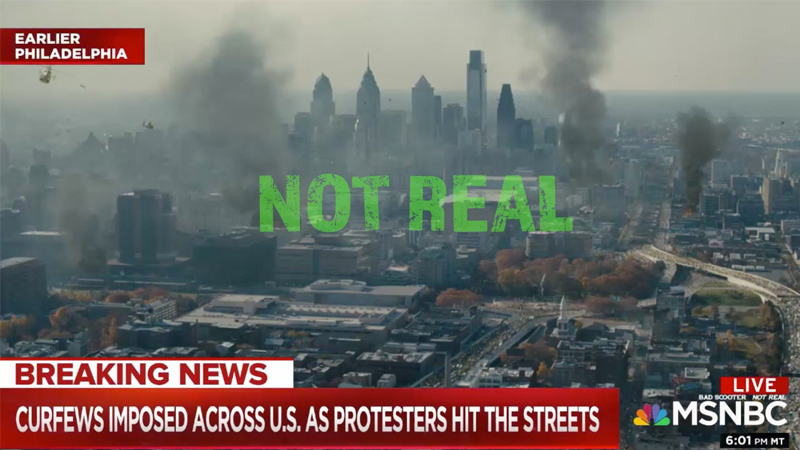 Despite what you might have heard on the “internet,” MSNBC did not air footage of the 2013 zombie film World War Z during their Philadelphia protest coverage. The footage that’s been going Twitter comes from @OfficialSlop, who posted the video as a joke.

@OfficialSlop, who posted the video in late May, has since spent the past week debunking their work, which is maybe the most responsibility anyone has ever on the internet. They even wrote “not real” next to the watermark. What more do you want, people?

Still, the video snowballed out of their control and went viral on Twitter, Facebook and conspiracy theory forums. Soon, the AP reached out to @OfficialSlop (which is kind of a great thing to write) who confirmed that “the video was fabricated.”

Well that escalated quickly. YES, that MSNBC clip was from World War Z, I even marked the video above the MSNBC logo “NOT REAL.”

I dramatically underestimated Twitter, many pointed it out, some claimed it was “real”-that was stupid of me.

AUDIO TAKEN FROM THIS REAL VIDEO LAST NIGHT (BELOW), WITH GRAPHICS ON TOP OF A TRAILER RIPPED FROM YOU TUBE.

The original clip has since been removed by its creator who “dramatically underestimated Twitter,” but can still be found on YouTube. It features an obviously fake report.

However, just because something is fake, that doesn’t mean people won’t take it as fact. @OfficialSlop’s work continued to spread throughout Twitter and even onto Qanon forums, according to the Verge, where some followers wonder why Q doesn’t have “better intel than to fall for this?” Good q.

I’m not part of any group, I’m not even a trump supporter.

It was just a dumb dumb joke / edited video out of stupid boredom and I apologize!

Fucking idiots #WorldWarZ they actually tried to pretend this was the us because of riots. pic.twitter.com/1rAoN8ixtH

…wow…really?!?!realDonaldTrump DonaldJTrumpJr @WhiteHouse
Is it legal to just throw a live tag on a trailer from 2012? This is an obvious still from the movie #WorldWarZ, how are they legally allowed to misinform the public like this? It’s just like CNN’s gun range video. pic.twitter.com/TYOtigdZFn

#MSNBC stealing footage from a movie 🤣 ARE YOU KIDDING ME?! 😂 #worldWarZ pic.twitter.com/ZiEdfEKPqn