High Hopes is a song by pop-rock band Panic! at the Disco. The song is the highest-charting single for the group to date, and has retained relevance in the years since its release due to its use in political campaigns, particularly Pete Buttigieg’s, which would play the song at his rallies. His supporters then created a widely-mocked dance for the track.

“High Hopes” was released as the second single off Panic! at the Disco’s second album, Pray for the Wicked, on March 23rd, 2018. On August 27th, 2018, the music video was released (shown below).

The song became the highest-charting Panic! at the Disco song, reaching number 4 on the Billboard Hot 100 and topping the Dance Airplay charts. The song won Best Rock Song at the 2018 Billboard awards, and swept the Best Alternative Rock Song, Winning Song, and Rock Music Video iHeartRadio awards. It also remained on the Billboard Hot 100 for a full year. It was also widely used in political campaigns, particularly that of Pete Buttigieg, but also Amy Klobuchar, Cory Booker, and Julian Castro.

Pete Buttigieg Panic! at the Disco Dance refers to a viral video of a Presidential candidate Pete Buttigieg supporter showing other supporters at the Nevada Day Parade a simple dance set to “High Hopes” by Panic! At The Disco. The dance was mocked by both Twitter users and TikTok users due to it cringey quality while many supporters of the candidate accepted it. On October 29th, 2019, Twitter user @conor_mcconor posted a video of the dance with the caption “I taught everybody at the Nevada Day Parade the High Hopes dance. Study up, we’ll be doing it a lot!” (show below). The dance gained over 500 likes and 120 retweets in 16 days.

On November 4th, Twitter user @KyleKulinski reposted the original video with the caption “Good god” which received over 11,000 likes and 1,400 retweets in 11 days (shown below).

Twitter user @Rested_Pizza responded to the post by saying, “Big Youth Pastor energy” which gained over 300 likes in 11 days.

On June 24th, 2020, Donald Trump used the song at a rally in Arizona, prompting Panic! at the Disco lead singer Brendon Urie to condemn Trump’s usage and send a cease and desist letter to the President. “Dear Trump Campaign,” he tweeted, “Fuck you. You’re not invited. Stop playing my song. No thanks, Brendon Urie, Panic! At The Disco & company.” 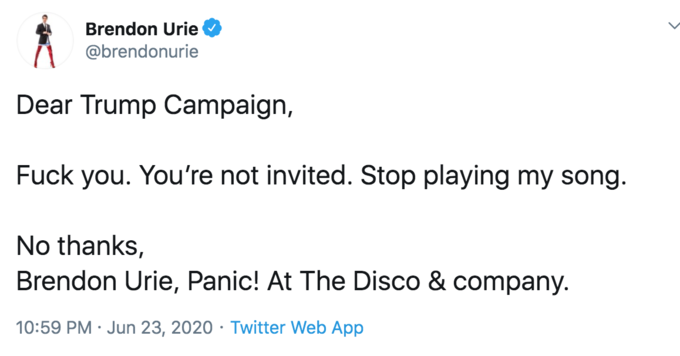