On June 16th, 2020, TBS published the video “Celebrity Show-Off Ja Rule Pitch Perfect.” The episode includes the commercial. Within one week, the video received more than 5,000 views (shown below).

Later that week, on June 20th, Twitter user @carlosgil83 posted the video. They wrote, “Greek food, anyone? This is the funniest sh*t I have seen on the internet in a while!” Within two days, the tweet received more than 3 million views, 800 likes and 500 retweets (shown below, left).

On June 21st, YouTuber Celebs24hr Videos published an isolated version of the video. The post received more than 16,000 views in less than two days (shown below, right). 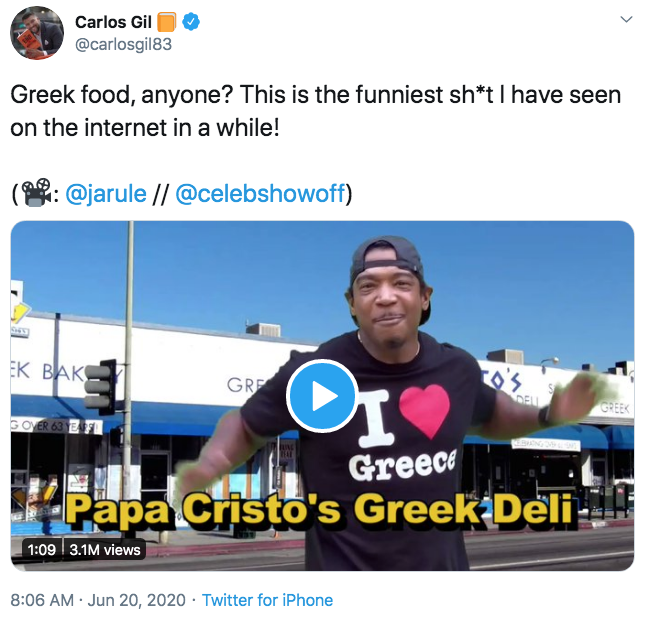 On July 22nd, the Shade Room Instagram shared a post by rapper 50 Cent about the commercial. He wrote, “This what happens when you fuck with me. I’ll have you and your whole label selling Gyro’s go head try me!” The post received more than 528,000 views and 27,000 likes in less than 24 hours (shown below).

\\ Go Corona, Corona Go \\
15 Of The Funniest Ways Bernie Sanders Is Asking For Your Support
Letterkenny Is The Perfect Glimpse Into Rural Canadian Life You Never Knew You Wanted
Dressed As Giant Bear, Sarah Palin Broke America's Brain With A Rendition Of "Baby Got Back"