Wear Orange is an awareness campaign for National Gun Violence Awareness Day, which is held on the first Friday in June. Started by Everytown for Gun Safety, the campaign honors the memory of 15-year-old Hadiya Pendleton who was shot and killed in Chicago in 2013. Pendleton’s friends wore orange, her favorite color, to commemorate her.

On January 29th, 2013, Hadiya Pendleton, a 15-year-old black girl, was shot and killed in Chicago, Illinois. Her death occurred one week after performing at events for President Barack Obama’s second inauguration.

Four years later, on May 5th, 2017, the New York Times published “The Color of Protest,” a report about the “Wear Orange” campaign, which asks people to dress in orange clothes on National Gun Violence Awareness Day. They wrote:

The nonprofit organization Everytown for Gun Safety had invited a mix of celebrities, designers and survivors of gun violence to a dinner for the start of its 2017 Wear Orange campaign, which encourages people to don the bold hue for National Gun Violence Awareness Day on June 2.

On June 1st, 2017, Instagram account for Moms Demand Action posted about the campaign. They wrote, “In @TimesSquareNYC, and across the nation, we will be seen and our voices will be heard tomorrow on National Gun Violence Awareness Day. Join us!” The post received more than 280 likes in less than four years (shown below). 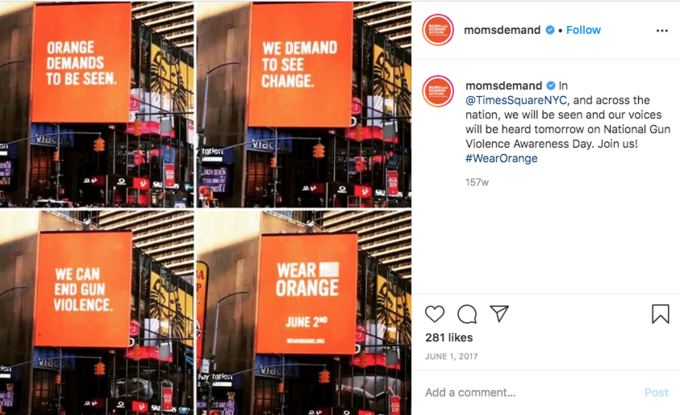 This would make us more productive
This is how I work in lockdown
The Flex Is Free
Anyone still doing their new year resolutions?